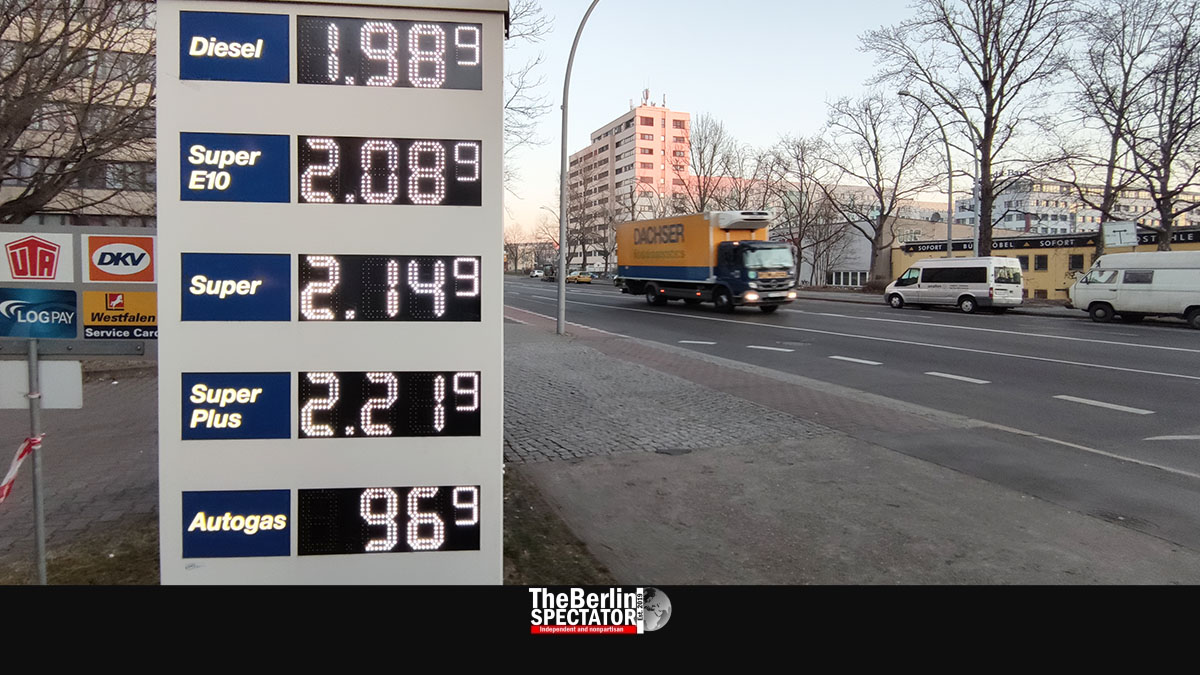 Germans who feel like getting into a bad mood just need to drive to a gas station today. What they will notice is that the fuel prices are literally exploding. At the pump, people’s wallets will empty quicker than a Lamborghini Aventador’s gas tank does at full throttle.

Berlin, March 9th, 2022 (The Berlin Spectator) — During the first Corona lockdown, going to a German gas station was a good experience. Because people were confined to their homes, hardly anyone drove or traveled. Therefore the supply was a lot higher than the demand. As a result, the prices slumped to long-time lows. At some point in March of 2020, a liter of Diesel was 0.99 Euro (1.08 U.S. Dollars or 0.82 Pounds Sterling) or the equivalent of 4.08 Dollars per gallon.

Today, exactly two years later, things are very different. Entering German gas stations is not for the faint of heart. If Valium behind the wheel was not dangerous, at least one pill would have to be swallowed ahead of any gas station visit. Since early 2020, the prices have more than doubled. According to the General German Automobile Association (ADAC), the nationwide average per day price for Super E10 fuel was 2.008 Euro (2.19 Dollars or 1.67 Pounds) on Tuesday. For Diesel it was 2.032 Euro (2.22 Dollars or 1.69 Pounds).

At one of the cheaper gas stations in the north-eastern part of Berlin, Super E10 was almost 2.09 Euro (2.28 Dollars or 1.74 Pounds) this morning. Here, the American equivalent would be 8.62 Dollars per gallon. According to CNN, the highest gas prices ever were registered in the United States of America too. But those 4.17 Dollars per gallon the Americans seem to be shocked about sound harmless in Germany, where the price is more than twice as high.

For a while now, the development of energy prices in general has been worrisome. People all over Europe complained about skyrocketing natural gas and electricity prices. Now, the Russian war of aggression against its smaller neighbor Ukraine is not exactly helping. In Germany, some politicians are already calling for a fuel price cap, including Tobias Hans, the Governor of Saarland who still wants to be reelected later this month. What he means is that the state should guarantee the gas prices do not exceed a certain level by adjusting the fuel tax.

In the meantime, while vampires suck people’s wallets dry at German gas stations, using less fuel is one way of dealing with it. In addition, people should compare prices between gas station brands and different times of the day. Motorists can do so by looking at those signs at gas stations when they drive by, or by using apps that are being offered for this purpose.

Slowing down on the Autobahn is another way of saving a lot of fuel and money. Another ground rule: Never fill up your tank at gas stations located right on the Autobahn. Leave the freeway instead, and look for a gas station in any town along the way, or go to those location the Germans call ‘Autohof’. Just follow the signs on the Autobahn. (read related feature entitled ‘The Top 10 Things We Need to Know Before We Hit the German Autobahn‘).

Refrain from using more expensive kinds of fuel your engine probably does not even need. Empty your car, meaning all of that stuff in the trunk which you have not used since 1995 is additional weight that should be removed in order to save fuel. Share rides and fuel costs with colleagues or friends. Increase the tire pressure to the level the manufacturer recommends. Do not use roof racks and do not drive like a maniac. Hitting the kickdown burns a lot of gasoline. You do not want to consume as much fuel as a Boeing 747-8i on takeoff.

We have a favor to ask: As of March 8th, 2022, thirteen readers are supporting The Berlin Spectator on a monthly basis. We appreciate everybody’s help a lot. Thank you so much! You know who you are.
But, The Berlin Spectator needs more supporters. Right now, we receive a low three-digit amount per month. The first digit is a 1. In order to make this a more stable project, the amount would have to be quintupled, at least.
This is the obvious question to you: Would you consider supporting The Berlin Spectator?
Even small donations help. You can choose between one-time contributions and monthly ones. And you have the choice between Paypal and Patreon. You can check out our Donations Page first. Thank you.