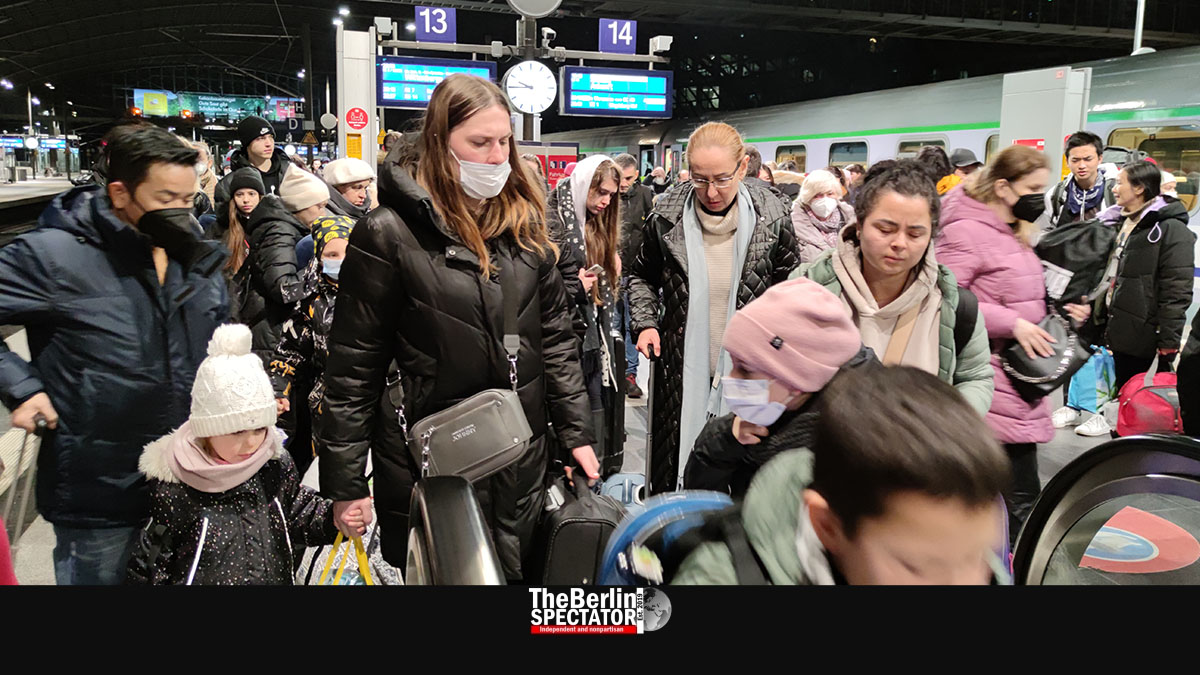 On Wednesday, Berlin Central Station was even fuller than before. More and more Ukrainians arrived all the time. Organizing help is a complex task.

Berlin, March 10th, 2022. Update: 8:08 a.m. (The Berlin Spectator) — Central Station is a huge place. Still, all the refugees from Ukraine and the volunteers who are needed there are running out of room. Most war refugees arrive on Polish trains on platform 14 on the top floor. One level down, on the first floor, those who intend to continue on to other cities or countries can get free train tickets. Refugees who do not know where to go and those who wish to stay in Berlin are being guided to the basement.

Communication with Loved Ones

Down there, a large area is reserved for Ukrainians who fled their country because they feared for their lives, and citizens of other countries who lived in Ukraine until Russia launched its attack. On Wednesday afternoon, one could hardly move around down there because there were far too many people. While hundreds got information at make-shift counters and let their children play in an area with carpets and toys, about a thousand people got into a long waiting line for SIM cards.

To war refugees, communicating with their loved ones who stayed behind, because they need to fight against the Russian invaders or for other reasons, is extremely important. That is why Telekom and Vodafone provided those cards to them. Because the long line took up so much room, the representatives of those two companies were kicked out of the location on Wednesday night. But nobody gave them a new spot. It was unclear where they would give out those SIM cards today.

Berliners who offered to accommodate refugees in their homes used to show up in the station’s basement too. Now, they are not supposed to go to there anymore, because of the space issue and for other reasons. Instead, they can register on this website (in English, German, Ukrainian and Russian). Volunteers will call them on the phone once they found Ukrainian refugees they match them with. This process is a lot easier than it was before, when residents stood in line for many hours to find refugees they could help. The same website is for those who fled Ukraine. They can register and find Berliners who will offer them bedrooms and make them feel welcome.

Down there in the basement, the new arrivals get sausages, soup and other food and beverages every day. At night, some war refugees usually take a rest right there in the basement of Berlin Central Station. Mattresses and blankets cover part of the cold and dirty floor. Because there is not enough room, Berlin’s City Mission opened a big tent it set up outside the station’s southern entrance. Here, a few dozen war refugees at a time will have the opportunity to sit down and eat something. A place like this one was needed, but it is not big enough. The Red Cross, which was treating refugees in the basement, had to move its little tents next to the big one outdoors to make room.

Apart from food, beverages, information, accommodations and SIM cards, the refugees get free train or bus tickets, depending on where they are going. In Berlin, 500 doctor’s offices will treat refugees from Ukraine for free. They are listed on this website (German only) and include general practitioners, psychologists, gynecologists, pediatricians and many other kinds of doctors.

Because Berlin’s refugee hostels are filling up quickly, many Ukrainians are now being sent to other parts of Germany by bus. This afternoon, some of them took people to Brandenburg province, others to Soest in North Rhine-Westphalia and other spots. According to a volunteer who was organizing the boarding process at a bus stop outside the train station said many of the war refugees did not really care where exactly they would be accommodated as long as they were safe and had a place to stay.

Everyone does something. In Berlin, the Senate deals with finding accommodations in the city and beyond, the Red Cross and Maltester Hilfsdienst are responsible for the medical part, hundreds of volunteers help by informing and guiding the refugees to the right places, and Deutsche Bahn provides free tickets. Berlin’s public transport provider BVG lets the refugees from Ukraine use their network for free. The state-owned company says it has taken 7,500 refugees to shelters so far.

The buses used for this big endeavor are being driven by employees who volunteered for this task. Other BVG staffers organize the situation at the bus stops outside the station and at Berlin’s Central Bus Terminal. For trips to Brandenburg, the BVG even rented coaches because its city buses are not the appropriate vehicles for trips outside the city.

An organized chaos: This is how the situation at Berlin Central Station could be described. Sometimes, issues need to be dealt with to make the whole thing work again. The volunteers need to improvise on a regular basis. One of them told The Berlin Spectator’s reporter the buses that were supposed to take people to the central point of registration and accommodations were empty at one point. At the same time, more and more refugees arrived at the station and room needed to be made for new arrivals. The reason for the congestion was the fact that the SIM cards had not been delivered yet. Once they were, those who got theirs entered the buses. The process was in motion again.

Berlin’s Governing Mayor Franziska Giffey announced former Tegel Airport would be turned into another point of registration and accommodation. The former airport hotel next door is empty right now. Refugees from Ukraine are supposed to to be welcomed there this coming weekend. “We are working on this at full speed”, Mrs. Giffey said. Up to 3,000 Ukrainians and war refugees with different nationalities can be accommodated there. She also said the Berlin fire Department and the police were setting up a control center at Central Station. The safety of women and children from Ukraine would be increased this way. As The Berlin Spectator reported, there may have been attempts by men to accommodate female refugees with the intention of exploiting them. The Federal Police told volunteers to keep their eyes open.

No End in Sight

In the late evening, after 9:00 p.m., three trains full of Ukrainians arrived. Within minutes, platform 14 and the better part of Central Station were crowded yet again. More volunteers were on site, including a young lady who held a sign saying “Support for people of color”. She approached persons from African states who fled the war with the Ukrainians because they lived in the country until it was attacked. All in all, some 10,000 people arrived on Wednesday. Unless Vladimir Putin stops his war of aggression, the influx is not going to end anytime soon.

In the meantime, Andrij Melnyk, the Ukrainian Ambassador to Germany, will be speaking in front of the Berlin House of Representatives on Thursday. House Chairman Dennis Buchner stated he was glad all parties had agreed to his suggestion to let Melnyk speak. “The humanitarian situation in Ukraine requires Europe’s unfettered solidarity”, Buchner said. “We will do everything we can to support the many people who fled Ukraine, and most of whom arrive in our city first, the best way possible.”

We have a favor to ask: As of March 10th, 2022, fourteen readers are supporting The Berlin Spectator on a monthly basis. We appreciate everybody’s help a lot. Thank you so much! You know who you are.
But, The Berlin Spectator needs more supporters. Right now, we receive a low three-digit amount per month. The first digit is a 2. In order to make this a more stable project, the amount would have to be quintupled, at least.
This is the obvious question to you: Would you consider supporting The Berlin Spectator?
Even small donations help. You can choose between one-time contributions and monthly ones. And you have the choice between Paypal and Patreon. You can check out our Donations Page first. Thank you.