Berlin: Number of War Refugees from Ukraine Rises Rapidly, Every Day is a Challenge 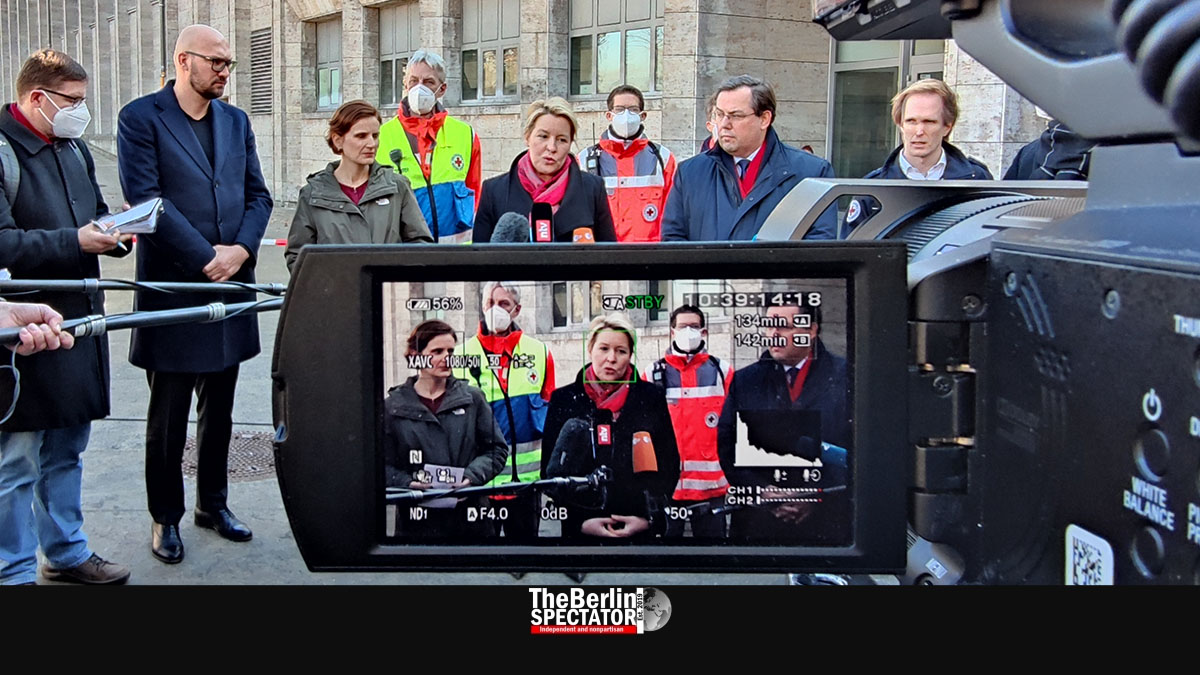 Since Russia launched its war of aggression against Ukraine two weeks ago, 18,000 refugees have been accommodated in Berlin. The Senate is working on making room for even more of them.

Berlin, March 12th, 2022 (The Berlin Spectator) — Until Friday morning, 109,183 refugees from Ukraine came to Germany since Russia’s war against their country began, according to the Federal Police which is responsible for checking the borders. By now, there are probably more than 120,000. At least 90 percent of the refugees who entered the Federal Republic since the attack commenced on February 24th, 2022, are Ukrainian citizens.

In Germany, Ukrainian war refugees have the same rights as everyone else who lived in Ukraine when Moscow launched its war. So do Ukrainians without residence permit who already were in Germany and those who were traveling abroad when it happened.

The authorities are expecting the number of war refugees who arrive in Germany to rise further in the coming days and weeks. The Berlin Senate is trying to prepare more emergency shelters and room for Ukrainians and persons of other nationalities who want to stay in Berlin. The problem is that the city’s refugee hostels are already crammed.

On Friday, Governing Mayor Franziska Giffey visited Berlin’s fairgrounds with Katja Kipping, her Senator for Social Affairs, where two exhibition halls were prepared as emergency shelters. So far, there are 500 beds at the location. On site, Mrs., Giffey said 400 more were in storage. They would be used in case of emergency. It will probably happen rather soon, because the enormous influx of people is not receding, but growing. In the late evening, Mrs. Giffey said she believed Berlin would have to accommodate an additional 4,500 refugees this weekend.

That is why part of former Tegel Airport is supposed be turned into a refugee accommodation too. It is supposed to happen before this weekend is over. A bit later, refugees will be staying at former Tempelhof Airport too. On Thursday night, an emergency situation arose when hundreds of Ukrainians arrived and did not have places to stay. That was why the emergency shelter at the fairground was used even before it was supposed to be opened. There is also talk about turning BER Airports Terminal 5, which used to be former Schönefeld Airport’s main terminal, into a refugee hostel as well.

Because the situation kept changing so quickly, Berlin needed to react all the time, Franziska Giffey said. “I cannot rule out anything at this point”, she stated. On Friday morning, 18,000 refugees from Ukraine were accommodated in Berlin. Half of them were accommodated by the state, the other half by Berliners, in private homes. “We are expecting 15,000 people to arrive in Berlin every day”, the Governing Mayor stated. “Berlin is the most popular destination.” The more new arrivals go to other federal states, the better, because Berlin will not be able to cope with the influx anymore soon.

The federal government is supposed to help, while other states already are. Mrs. Giffey told reporters, at this point, some issues were being resolved in phone calls with governors. “Could you accommodate 400 people?” These kinds of questions were discussed all the time, she said. As soon as a state like Brandenburg or Hesse agrees, buses will take refugees there, even spontaneously.

Just yesterday, several buses were supposed to bring Ukrainians to North Rhine-Westphalia again. But because Hesse opened up more capacities, they were rerouted to Giessen (German spelling: Gießen) and Frankfurt on short notice. The problem is that many war refugees do not want to leave Berlin. But there also are those who do not really care where exactly they go as long as they are accommodated safely.

Now, the federal government is supposed to help. Berlin’s Senate Department of the Interior sent an official request to the Ministry of Defense. Soldiers were supposed to help registering refugees. Not everyone in the German capital liked the idea, also because of the Bundeswehr, Germany’s army, is already involved in operations in Eastern Europe, including a sky policing mission. Besides, soldiers have supported local health authorities a lot during the ongoing Corona crisis. There are MPs like Marie-Agnes Strack-Zimmermann of the FDP who believe they should now concentrate on their core tasks. A spokesperson for the Ministry of Defense denied Berlin’s request in the evening. Instead, the Federal Agency for Technical Relief is going to support Berlin.

Because of reports about attempts by criminals to exploit refugees sexually or in other ways, Berlin’s Interior Senator Iris Spranger assured the Ukrainians in Germany the police and other authorities would protect them. They could feel safe in Berlin. She thanked the police for their work. Especially at Berlin Central Station and the city’s Central Bus Terminal, uniformed cops and colleagues in civilian clothes are present all the time. They are keeping their eyes open, and they keep on communicating with the volunteers who help the war refugees.

Berlin’s Land Office of Criminal Investigation sent a task force to the same locations. On top of it all, mobile police stations were moved there. And there is an operational command set up by the Berlin Police Department and the Berlin Fire Department. It exclusively deals with the situation at Central Station and the Bus Terminal.

Right there, at the Bus Terminal, many arrivals were registered on Friday. A helper told The Berlin Spectator, the refugees who were coming in now were poorer than those who had arrived during the first days of the Russian war against Ukraine, meaning they needed more help. He also said injured persons had been on some of the buses, as well as some children who had looked very pale and ill. In these cases, the organization Malteser Hilfsdienst provides medical treatment in tents at the terminal. More severe cases are being taken to hospitals.

Dozens of volunteers run a welcome center in a building which usually serves as a waiting room for coach passengers at the Bus Terminal. Here, volunteer drivers can be contacted, who take the refugees to places they need to go to, accommodations will be searched and all new arrivals will be offered snacks and beverages before they are being sent to refugee hostels or to the homes of Berliners who offer this kind of help.

At Central Station, Polish trains with hundreds of refugees from Ukraine kept on coming in on Friday. They got train tickets, bus rides, SIM cards, food and water or juice. There is more room in the basement now because the Red Cross moved outdoors. Still, the station was crammed, even more so than a few days ago. Babies, infants, older children, mothers, grandparents, everyone is coming, expect for men fit for military service.

On Friday, volunteers helped a man without legs off the train. Deaf Ukrainians came to Berlin too. Members of the Roma minority are among the refugees. So are LGBTQI persons. At Central Station, one of the many stands in the basement provides information exclusively to them, and there are volunteers who specifically help people of color. Generally, whole lot of help is being provided in Berlin. Every day is a challenge.

Berlin: The Ukrainian Refugee who Came to Become a Volunteer