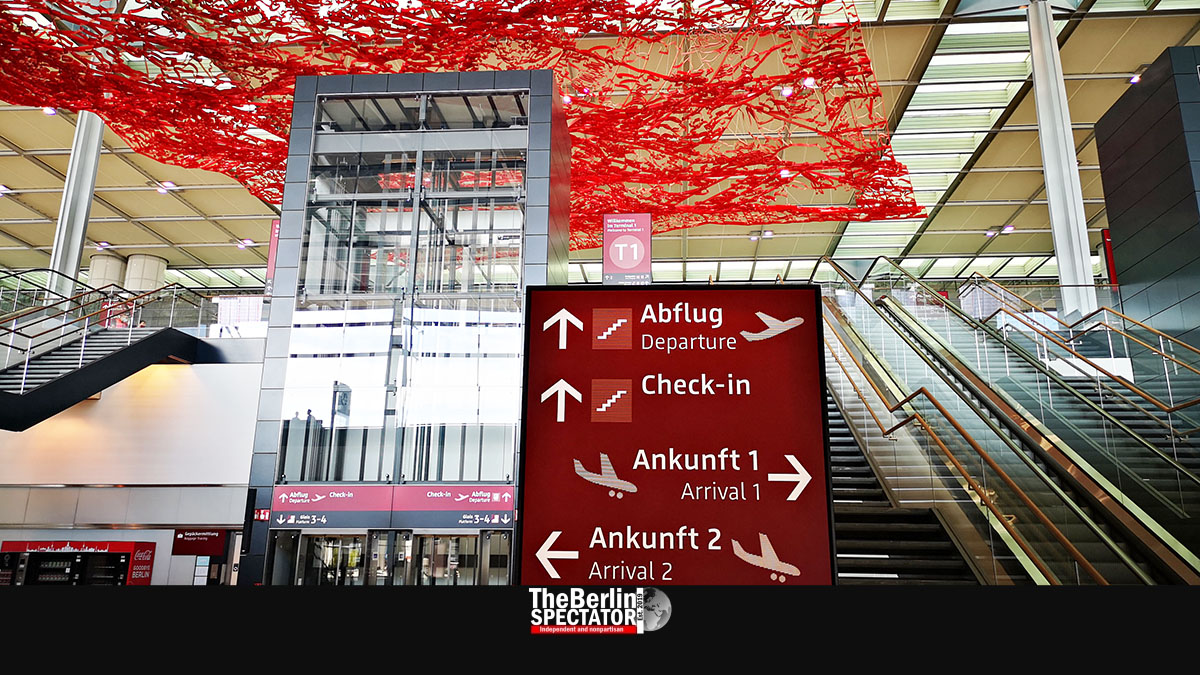 At BER Airport, numerous flights were cancelled on Monday. The Verdi union has asked security agents to go on strike for one day because the negotiations about a pay raise are stalling.

Berlin, March 14th, 2022 (The Berlin Spectator) — The departures list at BER Airport did not look too promising on Monday morning. For instance, the Easyjet flight to Ben Gurion Airport in Tel Aviv at 8:05 was cancelled. So were the flights to Bonn-Cologne Airport, to Düsseldorf, Stuttgart, Budapest, Frankfurt and Munich. Zurich? No. Vienna? No. Barcelona? No.

Some flights were supposed to take off in the morning, including the ones to the Bulgarian Black Sea city of Varna, to Riga, Saarbrücken, Pisa, Luxembourg and Helsinki. How they managed to let those flights depart was unclear. The passengers may have been checked by security agents who are not Verdi members.

After 8:45 a.m. CET, the list of incoming flights looked a little better. Only some arrivals (and corresponding flights) were cancelled because of the walkouts, including those from Cologne Bonn Airport, London Luton, Düsseldorf, Dublin and Stockholm. Whether the airlines will manage to get those aircraft back up into the air with passengers on board is not known.

The walkouts are supposed to continue until midnight on Monday. In the ongoing Corona crisis, which would have destroyed several airlines if their states had not bailed them out, the airline industry does not exactly need yet another problem. The war in Ukraine generally is a big issue as well. Today, many passengers will have difficulties getting to their destinations because of the strike.

But, from the perspective of Verdi, pressure needs to be applied on the employers. The union wants new 12-month contracts for its members which include a pay raise of at least 1 Euro per hour. Besides, Verdi wants the wages baggage workers and other employees receive to be in line with those for security agents who check passengers.

Located in Schönefeld, a town in Brandenburg province just outside Berlin, BER is not the only airport affected by the walkouts. In Bremen, at Cologne Bonn Airport, in Düsseldorf, Hamburg and Leipzig Verdi security agents went on strike as well. Many flights from and to those airports were scrapped.