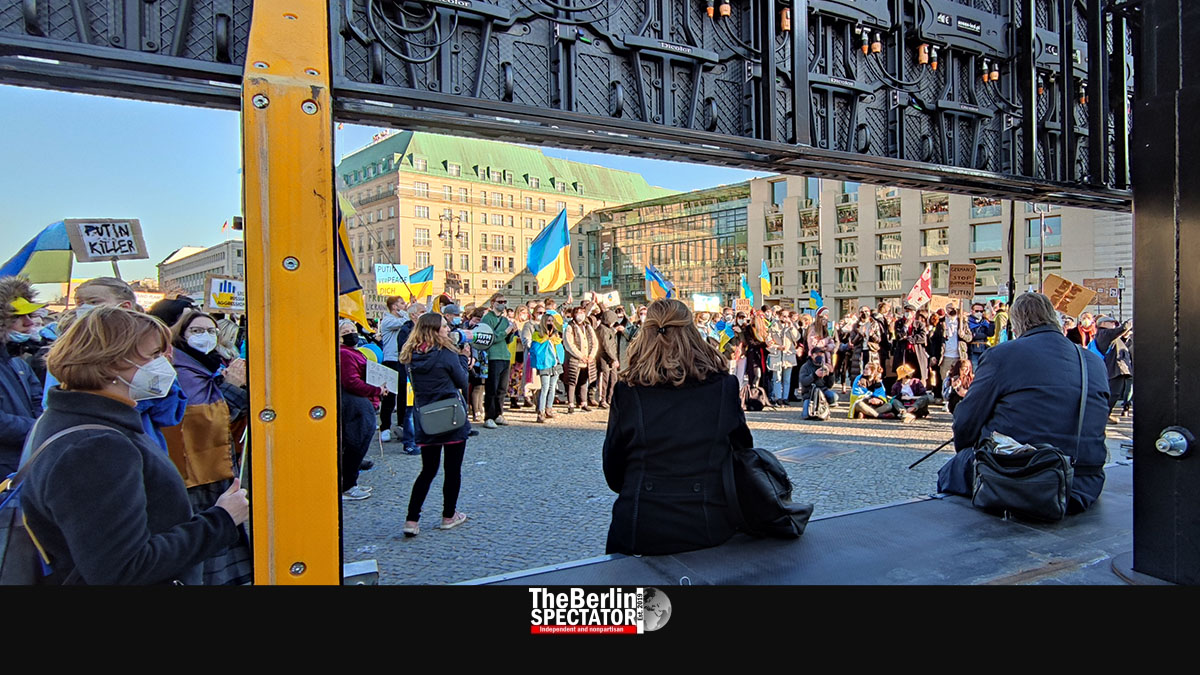 This past weekend, the Russian war of aggression against Ukraine still was on most people’s minds. While tens of thousands protested against it, hundreds kept on helping the thousands of war refugees who arrived.

Berlin, March 14th, 2022 (The Berlin Spectator) — Several protests against Russia’s war in Ukraine took place yet again in Berlin. On Sunday, many residents of different nationalities participated in the largest rally this past weekend. The police said up to 30,000 people had been there, while the organizers reported up to 100,000. What mattered was not the exact number of protesters, but the message: “Stop the war, peace and solidarity with the people of Ukraine” was the motto of the demonstration.

It started at Alexanderplatz square in Berlin’s eastern city center and ended hours later at Victory Column. Once this big rally had ended after a few hours, the next one commenced, at Brandenburg Gate. The message it conveyed was very similar. In this case, hundreds of Ukrainian expats were part of the protest. “Help Mariupol!” was one of the demands that were written on signs people carried.

Several protesters wanted help from above. One of the participants had a sign that read “Block our sky” . More sanctions were among the demands voiced here as well. Germany needed to stop importing natural gas from Russia, the protesters chanted. A group of women who posed for cameras on the square in front of the gate had signs saying “Hands off Ukraine!” and “Stop Putin!”. As always, people demanded an end to Putin’s war in front of the Russian Embassy too.

The volunteers at Berlin’s Central Bus Terminal and at Central Station did not have the time to join demonstrations because new trains from the Ukrainian-Polish border arrived all the time, with hundreds of war refugees on each of them. At the big station, some 40 volunteers waited for two delayed trains on platform 14 after 6:00 p.m. CET. They included German helpers with Russian language skills, Ukrainians, even Russians, and even a young man of Yemenite origin. The crowd of helpers was smaller at the Bus Terminal, were Ukrainian refugees arrived all the time as well. They were welcomed and given food, beverages and guidance in regard to accommodations and other questions.

Berlin’s problem is that the refugee hostels the city state had are crammed already. Since the influx of war refugees is continuing, something has to happen. On Saturday, former Tegel Airport was turned into a refugee hostel. So far, 500 beds were set up. On the first day, 425 of them were occupied by Ukrainian refugees who were taken there.

Governing Mayor Franziska Giffey stated Berlin could not do this alone and demanded more help. At this stage, Berlin is accommodating as many refugees per day as all other federal states combined, as Katja Kipping, Berlin’s Senator of Social Affairs, pointed out. Because this leads to problems, some trains from the Ukrainian-Polish border would be sent to Hanover soon, Mrs. Giffey said, without stops in Berlin or anywhere else. That way, the German capital could be unburdened at least a little.

Still, Berlin is facing a challenge which is growing every day. Even technically, a lot has to be accomplished. Tegel Airport, which was official closed on November 8th, 2020, a week after BER Airport was inaugurated, had to be connected to the power and water grids again. Containers with toilets and showers were set up in front of some of its entrances. The number of beds at former Tegel Airport could be increased to up to 3,000, Franziska Giffey said.

At this stage, a huge tent is being set up in front of the former airport. This is where arriving war refugees are supposed to register. The tent is supposed to be opened this week. Further south, at Berlin’s fairgrounds, 1,000 beds were set up by now, in two large halls. At BER Airport’s Terminal 5, former Tempelhof Airport and at barracks in Spandau, even more refugee hostels are supposed to be set up. Some Ukrainians even sleep in trains at Central Station and in buses.

Without the thousands of Berliners who are accommodating refugees in their homes, the city would not be able to cope with the situation. Franziska Giffey keeps on saying this was a national task. Her request for 240 soldiers she needs to run refugee hostels has not been answered by the Ministry of Defense. For now, it does not look good in this regard, also because the army is involved in several international missions.