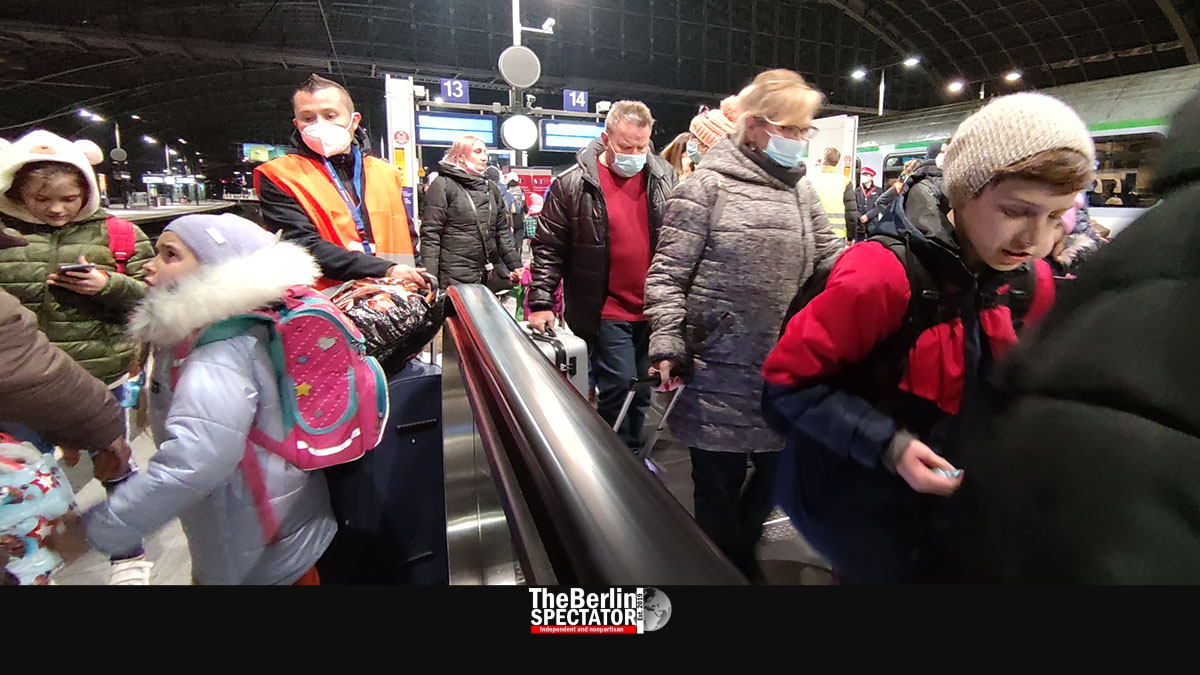 The city state of Berlin is hastily setting up more accommodations for the thousands of war refugees who arrive every day. Hundreds of Ukrainians are supposed to sleep in tents. In the meantime, Scholz told Vladimir Putin to stop the war.

Berlin, March 15th, 2022 (The Berlin Spectator) — At Berlin Central Station, the many officers the Federal Police sends to protect the refugees and help the volunteers do it like the Romans. Before trains from the Ukrainian-Polish border arrive, six of them gather in a circle, back to back, in a formation they must have rehearsed. That way, nobody can approach them from behind unnoticed or do anything forbidden without them getting a glimpse of it.

On Monday, the cops had to do this many times because those Polish trains kept on coming in all the time. Many of the women, children and elderly people who arrive know must have heard or experienced Russian attacks in the cities they fled from. In Ukraine, Russian soldiers waged war against them. But at Berlin Central station, Russian citizens are among the many volunteers who help them.

Every day, Berlin is more organized. But the accommodations the city sets up fill up very quickly. Where are the war refugees supposed to be taken to when they arrive at night? To the former airport in Tegel, a borough on the north-western part of Berlin. Last weekend, 500 beds were placed in the terminal. On Saturday night, they were full already. Now, the number of beds is supposed to be increased to 2,500 quickly. In addition, big tents are being set up on the former runway.

According to the RBB radio and TV network, a total of 7,500 beds will be available soon. At former Schönefeld Airport, another few hundred were supposed to be accommodated. In addition, up to 900 war refugees can sleep in two halls at the fairground, 9,000 in official refugee hostels and thousands more in guest rooms Berlin’s residents opened for them in their homes. The problem is that all of those beds, shelters and private accommodations will not suffice.

That is why other federal states are supposed to accept more Ukrainian refugees and persons of other nationalities who lived in Ukraine when the Russian army attacked the country. More than 3,000 Ukrainians are in neighboring Brandenburg, where the official hostels are full. Hamburg reported 9,000 arrivals from Ukraine. Their registration seems to be staling up there, because of the growing number of people.

In the meantime, Chancellor Olaf Scholz and Turkey’s President Recep Tayyip Erdoğan demanded a ceasefire after talks they held. “We absolutely agree that there needs to be an armistice as quickly as possible”, Scholz told the press in Ankara. “Halt the fighting” was the Chancellor’s message to Russia’s President Vladimir Putin. “With each day, with each bomb, Russia absents itself more from the international community”, he said.

Scholz also stated he had informed his Turkish host about the German Bundeswehr’s participation in defending the eastern borders to NATO’s area. Turkey was doing its part as well, the German head of government explained. Russia’s brutal approach also meant that the Federal Republic had to make sure its defense worked well. He mentioned the 100 billion Euro (110 billion U.S. Dollars or 84 billion Pounds Sterling) again, which Berlin will invest in this field. Erdoğan added Turkey would continue its efforts to achieve a truce in Ukraine. Germany has not really agreed with Erdoğan in a long time. In this case, it does.