Berlin: A Sense of Spring is in the Air 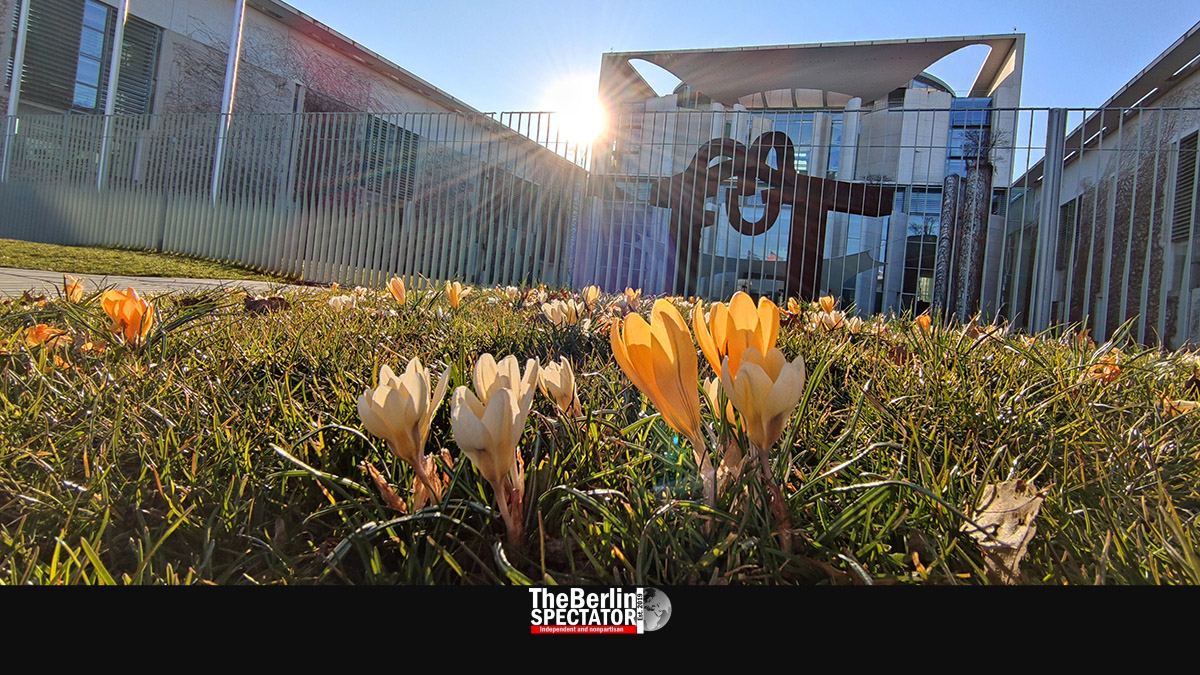 There are big problems, mostly global ones. Corona, the Russian war against Ukraine, the climate and what not. The harbingers of spring that were noticed in Berlin did not make many of us feel as good as they would have without those big issues, but they probably did to some extent.

Berlin, March 16th, 2022 (The Berlin Spectator) — Establishing whether spring has finally arrived in Berlin is easy. When we strain our ears we will hear little birdies sing their cute songs for a few seconds, until their happy chants are drowned in the exaggerated clatter of a Harley Davidson that drives by. Since the guy who rides it believes the sound of his bike is the coolest thing ever, everyone else has to think so as well, including all the babies he just woke up. Sure.

Once the motorbike is half a mile away, its noise is not audible anymore, and the sense of spring returns. At the chancellery in Berlin’s Mitte district, the crocuses were in bloom prematurely, a week before the official beginning of spring. A poodle walked by a middle-aged man peed on a bunch of them, but there were so many more, in white and yellow, that were not affected.

We do not have to get into our bikinis just yet, but maybe we should check whether they are still there, without moth damage, if we still like their colors and if they still fit us after all of those ‘pasta days’ we enjoyed a little too much. Even if this spring will definitely be difficult and sad to many, including those who had to flee from Ukraine, it is coming and it will give us some comfort.

On Sunday, when it was even a little warmer than today, Berliners were seen sitting on lawns all over the city, including the one located close to Central Station, on the opposite side of the Spree river, where more cute little flowers popped up and turned towards the solar system’s only star. They wanted the same things we have been longing for for several months, namely warmth, light and vitamin D. Of course, most humans were also waiting for the moment at which they will finally be able to take off their damned winter coats.

Well, Berlin is not Santa Barbara or Punta Cana. That is why we are still months away from jumping into the city’s numerous public outdoor swimming pools. As it turns out, the latest weather forecasts do not really look spring-like. Strong winds will be hitting us on Thursday. The star mentioned above will be hidden behind clouds in the afternoon, at least to those who will not be flying Airbuses above them. The wind is supposed to persist at least until the first day of spring, at 10 to 12 degrees Centigrade (50 to 53.6 degrees Fahrenheit) and night time temperatures around the freezing point. “Where in the hell is global warming when you need it?” (Quote by the comedian Louis Black from New York)

But those “bees and things and flowers” Roy Ayers sings about in his tune ‘Everybody Loves the Sunshine’ will surround us soon. The cherry blossoms in Brandenburg will be mesmerizing us. And Berlin is about to feel very different once those ‘Hop On, Hop Off’ sightseeing buses spread their Diesel clouds again. Sure, spring will be good, but not nearly as good as it would be if the world’s worst problems were resolved, especially Putin’s war.