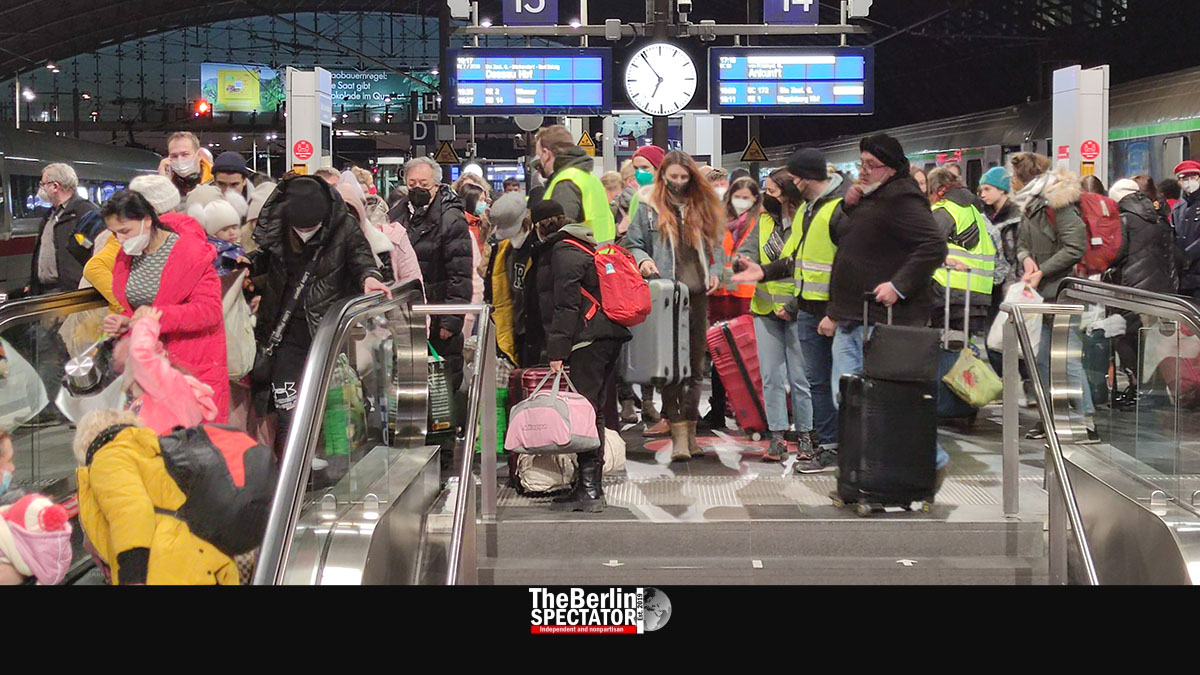 Every day, 10,000 refugees from Ukraine get off Polish trains that arrive at Berlin Central Station from the Ukrainian-Polish border, on average. So far, Berlin accommodates more war refugees than any other city or state in Germany. The city state called for help. Again.

Berlin, March 16th, 2022 (The Berlin Spectator) — Berlin cannot do it all on its own. At this stage, the German capital accommodates as many new refugees per day as the rest of Germany combined. By opening several former airports for Ukrainian war refugees, placing thousands of beds there, and by setting up large tents for the people who had to flee from their own country because Russia is attacking it, the city state has managed to cope with the influx, so far. Hundreds of volunteers have played an important part too, and still are.

Berliners who decided to accommodate refugees in their homes are helping too. So is Brandenburg, the neighboring federal state. But, what Berlin demands is a lot more help, a concerted action the entire country and the federal government need to be involved in. At the Berlin House of Representatives, all parties except for the extremist right-wing ‘AfD’ released a mutual press statement the title of which is “Humanitarian Help for War Refugees from Ukraine Needs to be a National Task”.

It says the caucuses of the Social Democrats (SPD), the Greens, the Christian Democrats (CDU), ‘Die Linke’ and the Free Democrats (FDP) demanded financial and logistic help with the placement of war refugees from the federal government. “The largest refugee movement since WWII poses an enormous challenge to our city”, the statement reads. It also says 150,000 of a total of almost 3 million Ukrainians who had fled from the Russian aggressors had come to Germany so far, and most of them to Berlin.

According to the parties mentioned, from conservative to far-left, Berlin cannot handle the sustenance and accommodation of those who need protection on its own. In order to prevent an overburdening of the city’s aid organizations, the refugees needed to be dispensed all over the Federal Republic, the statement says. In the past week, Governing Mayor Franziska Giffey had already called for help from the federal government, which is being run by her Social Democratic party friends. In fact, she did so twice, but without success.

In Berlin, penniless refugees from Ukraine can now apply for social welfare. The welfare agency in Berlin’s Mitte district, at Müllerstrasse 146, even announced special opening hours for them. On Wednesdays from 8:30 to 11:30 a.m., only they have access. Ukrainians and persons of other nationalities who lived there when Russia attacked can register until 11:00 a.m., or go there on any other weekday except Fridays during the same hours. War refugees in need have to go to the authority in the district they are accommodated in.

In the meantime, the Berlin Senate announced a cooperation with Brandenburg in regard to the accommodation of Ukrainian war refugees, and the opening of a makeshift refugee hostel in former Tegel Airport’s terminals A and B. While these aspects were known already, the next one was not: In order to run those accommodations, several hundred staffers are needed. The Senate said Governing Mayor Franziska Giffey had written a letter to all state employees in which she had asked volunteers for help.

Several decisions that had been implemented already were approved by the Senate today. Usually approvals are required before action is being taken, but some measures were urgent, especially at Central Station, where most refugees arrive.