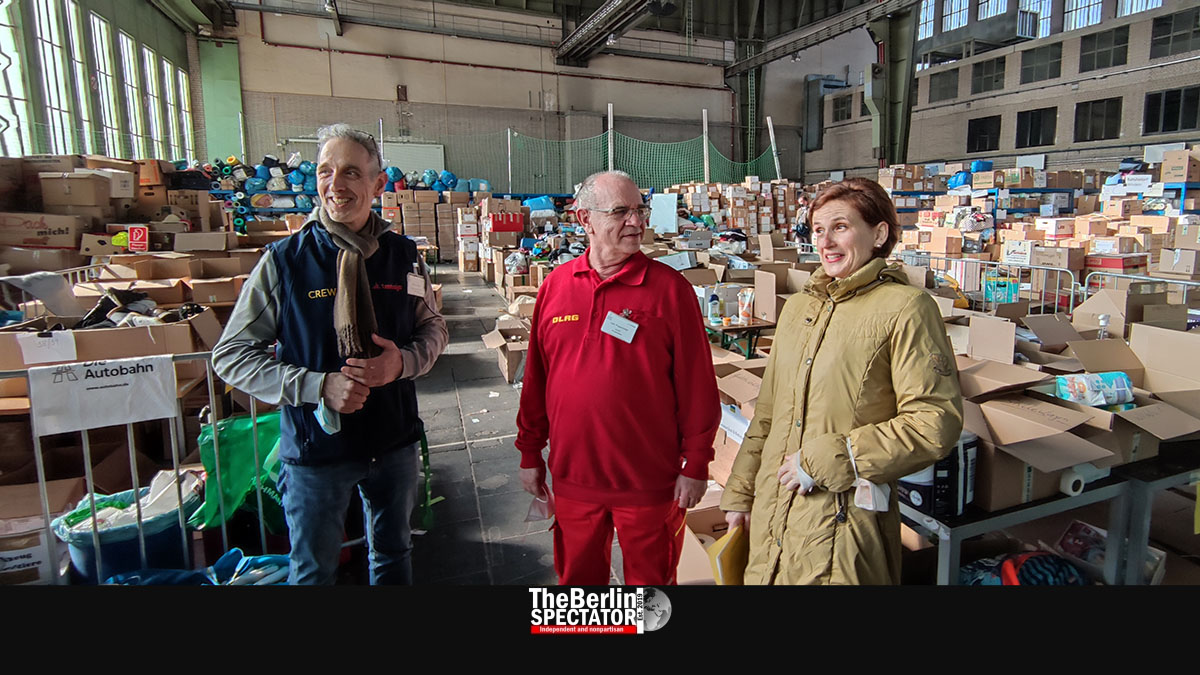 Berliners donate tons of clothes, food, hygiene articles and other items every day. Katja Kipping, the city state’s Senator of Social Affairs, visited a collecting point in Tempelhof. She said the allocation of refugees in Germany did not work yet.

Berlin, March 17th, 2022 (The Berlin Spectator) — There is an allocation formula called ‘Königssteiner Schlüssel’. It is used to establish how much Germany’s federal states need to contribute to big national projects. Their share depends on their tax revenue and population. In the kind of situation the Federal Republic is facing now, in which it needs to accommodate thousands of refugees from Ukraine per day, the allocation key can be used as well. It has to, says Senator Katja Kipping.

She appeared at Berlin’s former Tempelhof Airport on Wednesday, where the organization ‘Spendenbrücke Ukraine’ collects commodity contributions. In a former airplane hangar, 600 cubic meters (21,189 cubic feet) of donations are being stored right now. Hundreds of volunteers are busy picking up and preparing bags with clothing and boxes full of other items for Ukraine.

“Baby food”, it says on the label on one of the thousands of boxes, “Cookies”, “Sweets”, “Cotton swabs”, “Toys” on others. Headed by Michael Elias, a man who was very active during the refugee crisis of 2015 as well, the charity organization Tentaja is behind all the action. It needs to make sure it has enough contributions and find ways to ensure they actually arrive at their destinations in Ukraine. The transport can be dangerous. Nobody wants those donations to be dumped somewhere along the Polish-Ukrainian border.

At this stage, Tentaja relies on Deutsche Bahn. Trains can transport more material than trucks and, at least so far, they do enter Ukraine. But, in some cases, trucks are being used as well. Right there at the hangar, one truckload was prepared and ready to go for a pickup they expected. According to Michael Elias “all donations are welcome, except for trash and furniture”. His organization’s website (German only) answers all questions about donations that can be made.

During her visit at ‘Spendenbrücke Ukraine’ Katja Kipping said the number of war refugees Berlin accommodated was increasing. On Tuesday, 5,500 of them had arrived on trains and 2,000 on buses. Berlin housed 1,500 of them. The other refugees travelled to other destinations or found a room to stay on their own. But this number shows the pressure that mounts on Berlin.

Katja Kipping said she hoped the allocation formula would be used once the new refugee registration center at former Tegel Airport was ready. It will take a few more days. Tegel is supposed to have a high capacity. Registering 10,000 Ukrainian refugees per day should be possible. The idea is to send many of them to other federal states as quickly as possible. Berlin wants to help, and it does, but its accommodations are filling up quickly. The minute the Senate opens a new refugee hostel, it will be filled.

Because Poland seems to have reached its capacity, Berlin is expecting even more Ukrainians to arrive. Senator Kipping said she wanted help from the federal government in regard to logistics and personnel for the new refugee center. According to the Berlin Senate, Bundeswehr soldiers are supposed to help, but there were conflicting reports about the question whether its request to the Ministry of Defense has been approved or not.

Run by the Red Cross, the refugee center at Tegel Airport is supposed to have it all, including a child care center, a laundromat, a police station and its own bus terminal. Two thousand helpers will be needed to work there in three shifts. At this stage, big tents are being set up on the former runway and at other locations at the former airport.