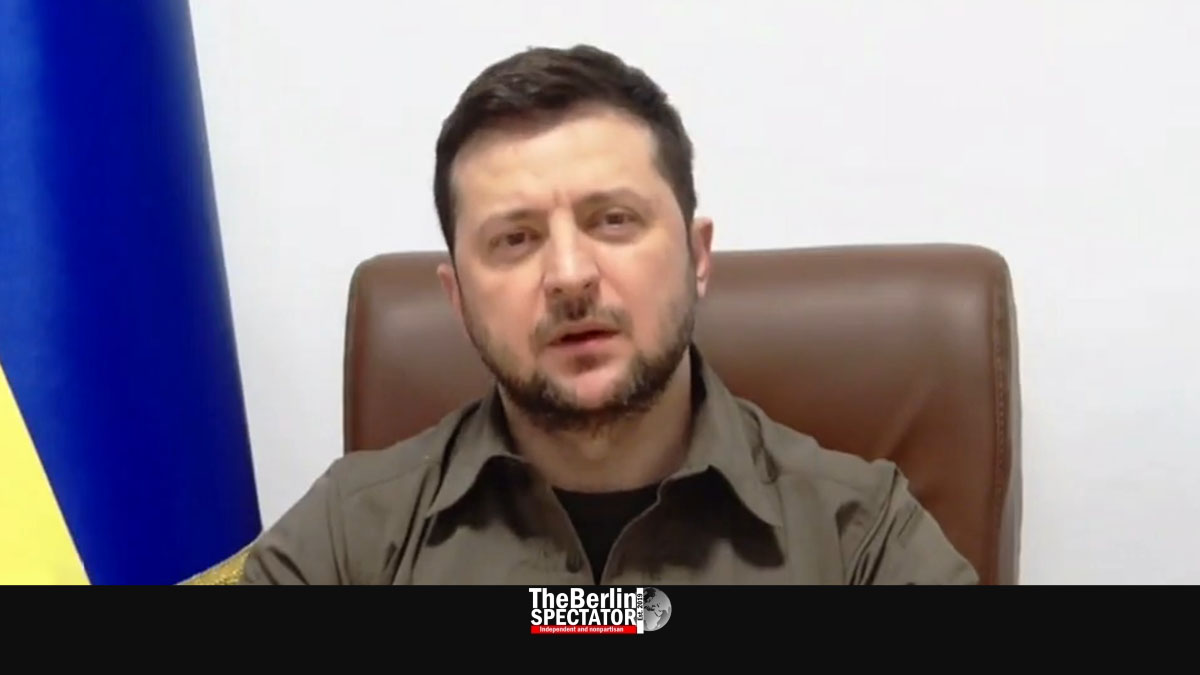 Volodymyr Zelenskyy addressed the Berlin Bundestag today via a video connection. He criticized Germany for its response to Russia’s aggression. At the same time, he thanked all Germans who were helping Ukrainians.

Berlin, March 17th, 2022 (The Berlin Spectator) — In a speech in front of the Bundestag which was transmitted from Kiev via a video connection, Ukraine’s President Zelenskyy both criticized and thanked Germany. He said after eight years of war in the Donbas region and three weeks of attacks against his entire country the Russians were in the process of destroying “everything we have built up” with missile, bomb and artillery attacks. Thousands of people had died, including 108 children.

Zelenskyy said Germany had acted too late. When the Russian military presence around Ukraine had grown, Ukraine had seen the relations between German corporations and Russia. “Back then we said North Stream 2 was Russia’s preparation for the war. But the answer we got was that this was about economic ties only.” Zelenskyy was referring to the North Stream 2 natural gas pipeline, a multi billion Euro project Germany insisted on continuing until Russia launched its attack.

The President said there was some kind of a wall that separated Europe from Ukraine. “When we talk about an accession to the European Union and our request is denied, this is another brick in this wall”, he told the German parliament. There was a country overseas that was closer to Ukraine than Europe. In this case, he meant the United States of America. President Joe Biden just approved another 800 million Dollar military aid package for Ukraine.

Volodymyr Zelenskyy even quoted Ronald Reagan’s famous Berlin speech. “Mr. Gorbachev, tear down this wall.” By doing so, he meant to say Germany and Europe needed to tear down the wall he was referring to and support Ukraine more than it already does. Germany also had a historical responsibility, Zelenskyy said.

He mentioned a Russian attack on Babi Yar, the location near Kiev at which German soldiers committed one of the worst massacres in the history of mankind in September of 1941 by murdering 33,171 Ukrainian Jews, including children. When the Russian army had attacked the location in the ongoing war, a family had been killed while commemorating relatives who had died in the massacre. The site is a memorial today.

Zelenskyy said Russia had flattened Mariupol. The city was under attack 24 hours per day while hundreds of thousands of people were still there, without water or food. The Russian troops did not differentiate between civilians and soldiers. Theaters, maternity clinics, children’s hospitals, everything was being destroyed. Humanitarian convoys could not enter Mariupol. “You can watch of all this happening when you look through that wall”, President Zelenskyy stated.

Referring to the Berlin Airlift, he said Ukraine could not set up an airlift of this kind because the Russians were controlling the airspace. NATO has repeatedly rejected calls for protecting Ukraine’s airspace because of the danger an operation of this kind could cause the war to escalate into a global one. Zelenskyy, on the other hand, told the German MPs the values Europe was talking about all the time needed to be defended.

At the same time, he thanked Germans who helped Ukraine, including normal citizens, journalists, German companies that put morale above profit and politicians who had called for the sanctions against Russia. “Chancellor Scholz, please help us to stop this war”, Volodymyr Zelenskyy said. “Long live Ukraine.”