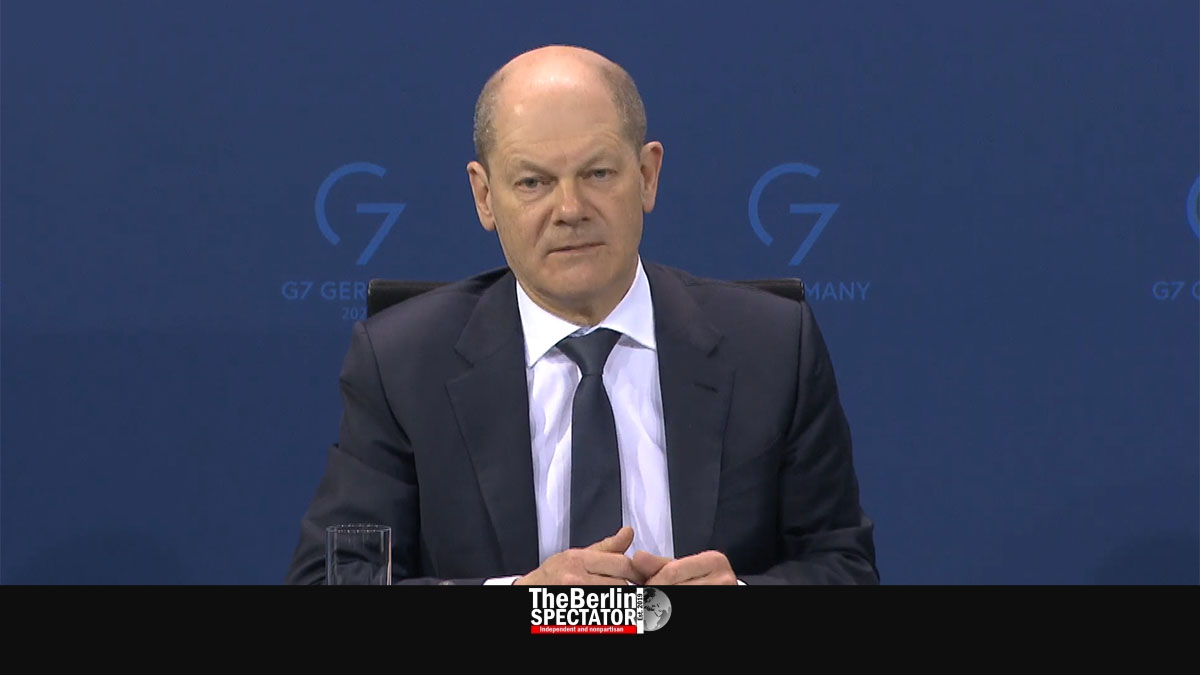 In Berlin, Olaf Scholz’ latest online meeting with the Governors from the sixteen federal states was about both Russia’s war against Ukraine and the Corona policy. Germany is trying to deal with two crises. While there is unity in regard to Ukraine, the government’s Corona approach led to arguments.

“Since Russia started its attack on Ukraine, we are dealing with another crisis”, Olaf Scholz said in Berlin. “It will affect all of us.” He said many of the millions of refugees had come to Germany in order to be protected from the attack ordered by the Russian President. “The federal government and the states condemn this war Putin has launched”, the Chancellor stated. “We are standing by Ukraine’s side, and we are supporting it financially, with humanitarian and military aid.”

Just hours before, Ukraine’s President Zelenskyy had criticized Germany for having acted too late and demanded more help in a speech in front of the Bundestag, which he held from Kiev via a video connection. From the perspective of a President of a country that is being attacked without reason, more has to be done to stop the war. But he did thank Germany for helping Ukrainians.

This exactly is one of Germany’s priorities right now. “We agreed that we will continue to support these people”, Scholz stated. “There will be many of them. Poland has accommodated most of them, and the numbers are increasing.” Germany wanted to offer protection to the refugees. For this purpose, the federal government and the federal states would pool their strengths.

“Everyone can enter Germany without visa. They will receive residence permits, are allowed to work, they are being offered German language and integration courses and there is medical care for them”, Scholz explained. He thanked all helpers, including the thousands of volunteers. There was “an overwhelming culture of helpfulness and solidarity”.

Helping this many war refugees from Ukraine costs money. Of course the big question arose during the online conference: “Who is paying?” Olaf Scholz said the government and the states would discuss this question in a working group over the next three weeks. By the time the next meeting takes places, the share the Federal Republic of Germany will be covering and the percentage the states need to contribute are supposed to be settled.

“We are not pointing fingers at each other, but linking arms”, the Chancellor stated. “This is what the citizens of this country expect.” The efforts would be organized jointly. Accommodating the refugees was a big task. Olaf Scholz also said it was clear that this was Vladimir Putin’s war. He had started it. Therefore, affronting, offending or attacking people from Russia was “completely unacceptable”.

At a press conference after the online meeting, Scholz was joined by Berlin’s Governing Mayor Franziska Giffey and North Rhine-Westphalia’s First Minister Hendrik Wüst. He was connected to both the meeting and the press conference from a hotel room in Jerusalem. During a visit to Israel, he was tested positive for Corona. For that reason, he could not return to Germany as planned.

Corona was the other big subject that was discussed. Today, the Bundestag is supposed to pass Germany’s new Infection Protection Act. “The pandemic is not over”, Olaf Scholz stated. “Fortunately, the situation at our hospitals is not as dramatic as it would have been months ago.” He said the disease progression for most people, especially those who had been vaccinated against Corona, was not as severe as it had been earlier in the ongoing crisis.

According to the Chancellor, a “new phase in the pandemic” has begun. Like in other European countries, Germany would abolish many Corona rules. The new law the parliament would pass today was taking the latest developments into account. The basic rules, including the mandatory mask rule in public transport and regulations for regions with very high Incidences, would remain in place. The Chancellor thanked the thirteen First Ministers, two First Mayors and one Governing Mayor for the “constructive discussion” they had had.

Many disagree with Germany’s new Corona approach. Most federal states wanted more rights in regard to Corona rules for emergency situations. According to Olaf Scholz, the Bundestag can and will react quickly and come up with a new Infection Protection Act whenever necessary.

Kool & the Gang to Bring the Funk to Germany