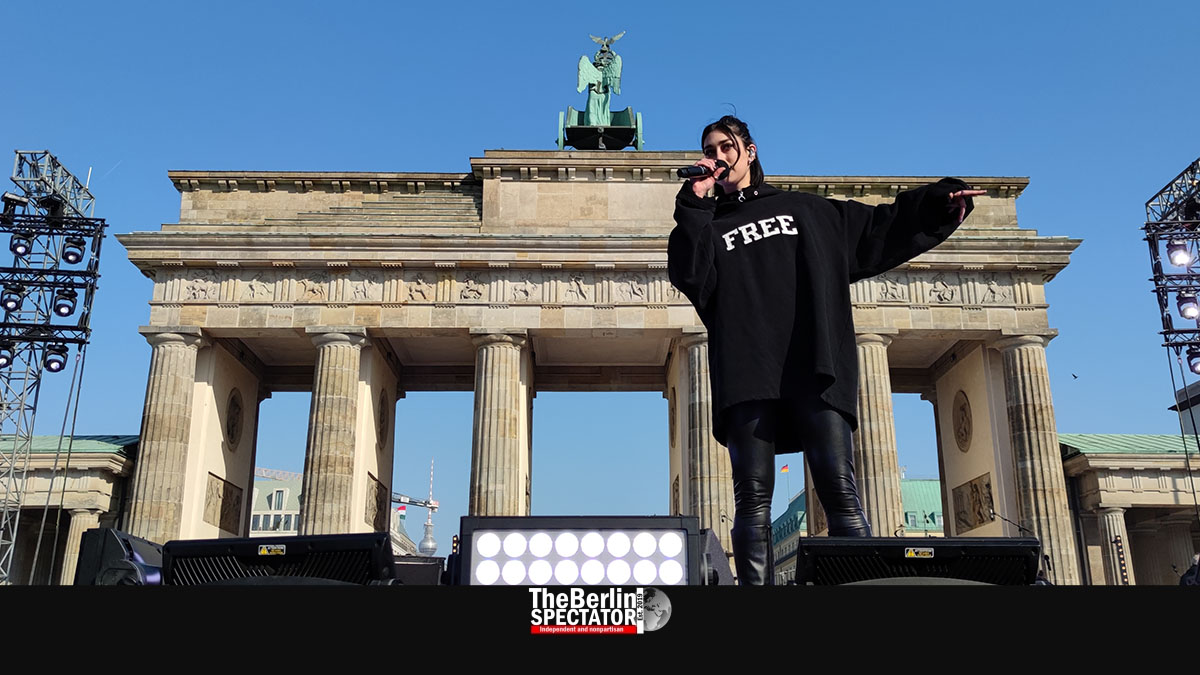 In Berlin, 15,000 people gathered at Brandenburg Gate on Sunday afternoon, where German bands and singers performed at a protest against Valdimir Putin’s war of aggression in Ukraine. Even more Berliners were expected at the ‘Sound of Peace’ rally in the evening.

Berlin, March 20th, 2022 (The Berlin Spectator) — Crowds of Berliners took part in several demonstrations against the war in Ukraine yet again. One of those was a “dance event” the participants of which demanded an end to discrimination of LGBTIQ people and persons of color who are fleeing from Ukraine. In front of the Russian Embassy, a constant protest demonstration took place. A total of five anti-war protests had been registered with the Berlin Police Department.

The biggest one of them all was a concert. A stage was set up on the western side of Brandenburg Gate. In the early afternoon, Madeleine Juno sang a song just before another young lady presented a short rap performance. Natalia Klitschko sang a song as well. She is married to Vitali Klitschko, the Mayor of Kiev. “What is happening in my country is just terrible”, Mrs. Klitschko said on stage. It was important for the world to see that many people supported Ukraine, she stated. Ending Russia’s war was the most important aspect, Natalia Klitschko told the audience. “If we stand together, we will reach this goal”. She also thanked all participants for their support.

Later on Sunday evening, some rather big names in German Pop and Rock music were supposed to hit the stage too, including the singer and actor Marius Müller-Westernhagen, the band Fury in the Slaughterhouse, violinist David Garrett, the German singer Sarah Connor who adopted this English name because it sounds more international, the bands Silbermond and The BossHoss as well as many others.

Just about half a mile away, at Berlin’s Central Station, people who just fled Ukraine, three weeks into the Russian war, arrived on platform 14. Dozens of women and children got off a Polish train, one of many that were expected today, at 3:32 p.m. local time. They were informed about their options by volunteers and sent downstairs, were they got hot soup, sausages and beverages. Buses took them to the new refugee welcome center at former Tegel Airport.

This is where new arrivals are supposed to register before they are being sent to cities and counties in all parts of Germany. Those who want to stay in Berlin may do so, but Germany is now trying to take most refugees elsewhere. Berlin’s official refugee hostels are crammed, which is why some trains with Ukrainians are being sent to Hanover directly, without stops in the capital. From Wednesday, Cottbus Central Station will be yet another big hub for war refugees.

The Berlin Spectator finally has a newsletter, on Substack. You can subscribe here:

According to Berlin’s Governing Mayor Franziska Giffey, soldiers will help run the refugee hostel in Tegel for ten days. By then, the city would need more volunteers, she stated. So far, the city state of Berlin has spent 26 million Euro (28.8 million U.S. Dollars or 21.8 million Pounds Sterling) for the accommodation of refugees from Ukraine, but this amount does not include the social welfare some of them are receiving as well.