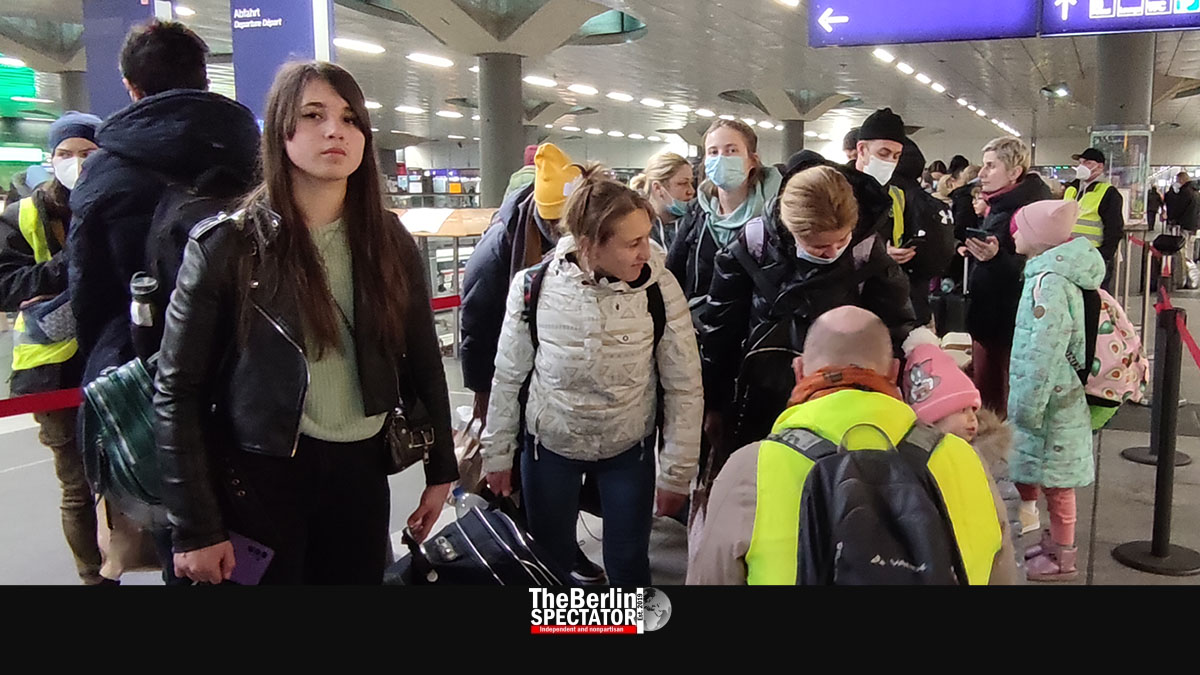 Since Russia commenced its attack on Ukraine three weeks ago, ten thousand war refugees arrived in Berlin almost every day. Now, there is some relief for the German capital: Hanover and Cottbus are being turned into additional hubs.

Berlin, March 20th, 2022 (The Berlin Spectator) — When the Russian war of aggression commenced in Ukraine, refugees started coming to Germany. Volunteers organized themselves immediately and helped new arrivals from the start. Many Berliners accommodated thousands of Ukrainians in their homes. At the same time, Berlin’s refugee hostels filled up quickly. Then, former airports were turned into refugee emergency accommodations and registration centers.

When Berlin reached its limit some two weeks ago, Governing Mayor Franziska Giffey called for help from the federal government several times. Now, finally, her calls have been heard. Hanover just became one of the hubs at which trains with refugees arrive. This means that the burden Berlin was carrying has been eased to some extent. This coming week, on Wednesday, another hub will be added. It is the city of Cottbus in Brandenburg.

Cottbus makes a lot of sense. Located only 36 kilometers (22 miles) from the Polish border, it has the right geographic location. Six refugee trains per day are supposed to be sent there. Up to 3,500 war refugees per day are supposed to reach Cottbus Central Station every day. From there, they will be allocated to cities and regions all over Germany, meaning, a just distribution will be ensured. The Interior Ministry in Berlin is involved in the efforts to organize the logistics.

From Wroclaw to Cottbus

German-language media quoted a spokesman for the Ministry who said Deutsche Bahn and the main Polish railway company had agreed to send a few special trains per day from Wroclaw to Cottbus directly. From there, the war refugees will be sent to destinations in all parts of Germany by bus. The Red Cross is supposed to coordinate this endeavor. But it is unclear how many Ukrainians or persons with other nationalities who lived in Ukraine will concur. They have the right to go anywhere they want. Many of them might still want to go to Berlin.

According to the RBB radio and TV network, Brandenburg’s Interior Minister Michael Stübgen was “irritated” a little. He was quoted as saying Cottbus was ready to provide help to 800 refugees per day. If the federal government wanted Brandenburg to accept more Ukrainian refugees, it would have to coordinate things with the state and provide more funds.

What Holger Kelch, the First Mayor of Cottbus, had to say sounded better: “This is a new situation and a new challenge”, he stated. It would be met with some pride and self-confidence because, so far, the accommodation and care provided in Cottbus had been exemplary, Kelch stated.

So far, at least 207,742 war refugees from Ukraine have arrived in Germany. This is the number of people the Federal Police registered at the borders. But the actual number is probably a lot higher. The borders between Poland and Germany are open. This means most persons who enter Germany from there will not even be checked, unless they sit on trains full of refugees. In Frankfurt (Oder) and at other locations, the Federal Police are checking the I.D.s of most passengers on trains from Poland.