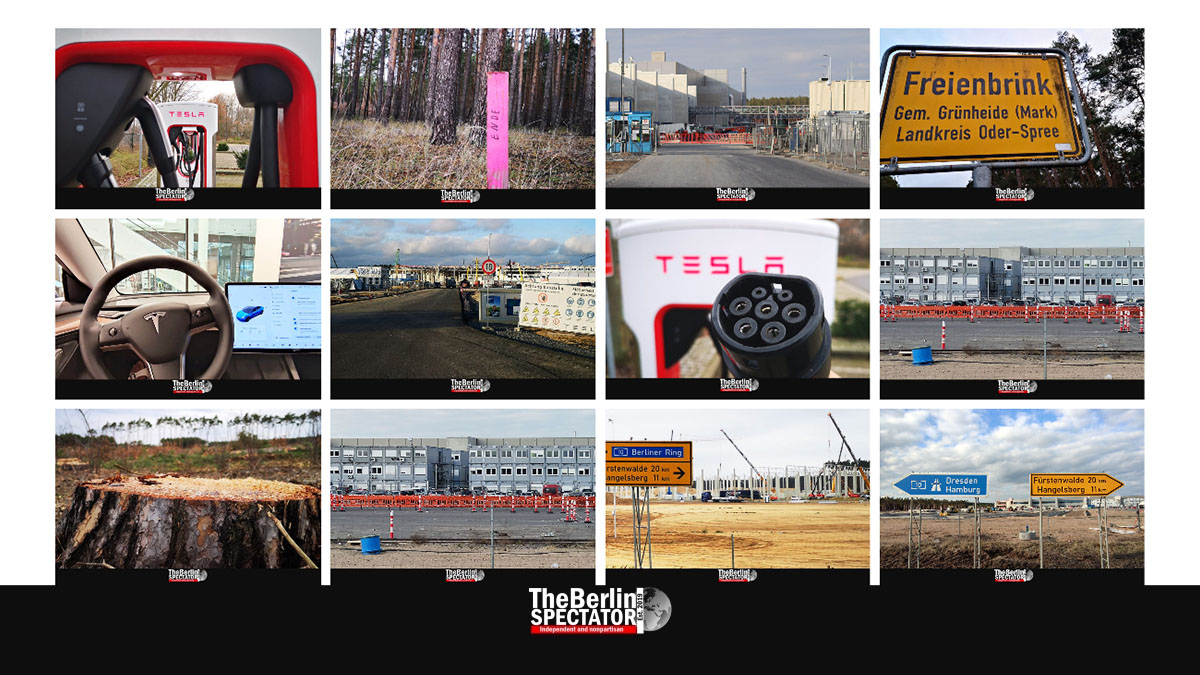 Great events are often foreshadowed. In Brandenburg province, one of them is about to happen. Starting as soon as tomorrow, Tesla will manufacture cars in Europe. The company’s CEO already flew in.

Berlin, March 21st, 2022 (The Berlin Spectator) — On Monday, just after 3:00 a.m. local time, a Gulfstream business jet took off from Austin. Was Elon Musk on board? You bet. He was supposed to land at BER Airport in Brandenburg at 11:57 UTC according to the Twitter account ‘Elon Musk’s Jet’, which was 12:57 p.m. CET. From there, his new ‘Gigafactory’ is some 32 kilometers (20 miles) away. At full throttle, Tesla Model S can do it in 35 minutes.

Pain in the Neck

Musk is the man who pulled through. Just before Corona hit, on November 13th, 2019, he announced he would have a factory built close to Berlin. Last year, in the summer of 2021, ‘Berlin Model Ys’ were supposed to be produced there. Ambitious goals are good in oder to get ahead quickly, especially in Germany, where lame approval processes can be a pain in the neck.

If you intend to build a factory, do it like Elon Musk. Make sure it is the biggest industrial project eastern Germany has seen since the country’s reunification in 1990. The state government helped Tesla get through the notorious German bureaucracy in record time. Today, the final permission is supposed to be issued. All Tesla will have to do is to build its vehicles and comply with a few more requirements.

The main reason for the speed at which Tesla replaced a tree plantation in Brandenburg with a ‘Gigafactory’ was its readiness to take risks. The factory was built preliminary permissions. Had the Germans not played ball, Musk would have had to strip down the new factory and try somewhere else. But it was clear the endeavor would be successful, in spite of hurdles that had to be taken along the way.

Elon Musk himself intends to hand over the first 30 ‘Model Ys’ to customers on Tuesday after 3:00 p.m.. He will also welcome some rather prominent guests at an inauguration event. According to the RBB radio and TV network, Chancellor Olaf Scholz is supposed to be there with Commerce Minister Robert Habeck. Brandenburg’s First Minister Dietmar Woidke and members of his state government are invited too.

‘Automobilwoche’, a publication that specializes on the auto industry, reported Tesla had already tested its production line at the ‘Gigafactory’ located at the Freienbrink industrial park by manufacturing as many as 2,000 ‘Model Ys’ ahead of the official production start. Half a million vehicles per year are supposed to be pumped out of there soon. According to the German ‘Auto, Motor und Sport’ magazine, 30,000 of them would be made during the first half of this year.

The German auto industry did not take Musk seriously when he started fitting batteries and electric engines into Lotus Elise bodies. A bit later, when Tesla introduced the Model S, the laughter among Germany’s top auto industry managers turned into an uneasy smile. Then, when more Tesla models were added and when they sold successfully, including in Germany, even without the ‘Gigafactory’, some of those managers probably did not sleep too well. Tesla vehicles now carry the “Made in Germany” label. The German auto industry was just revolutionized by an American with South African roots.