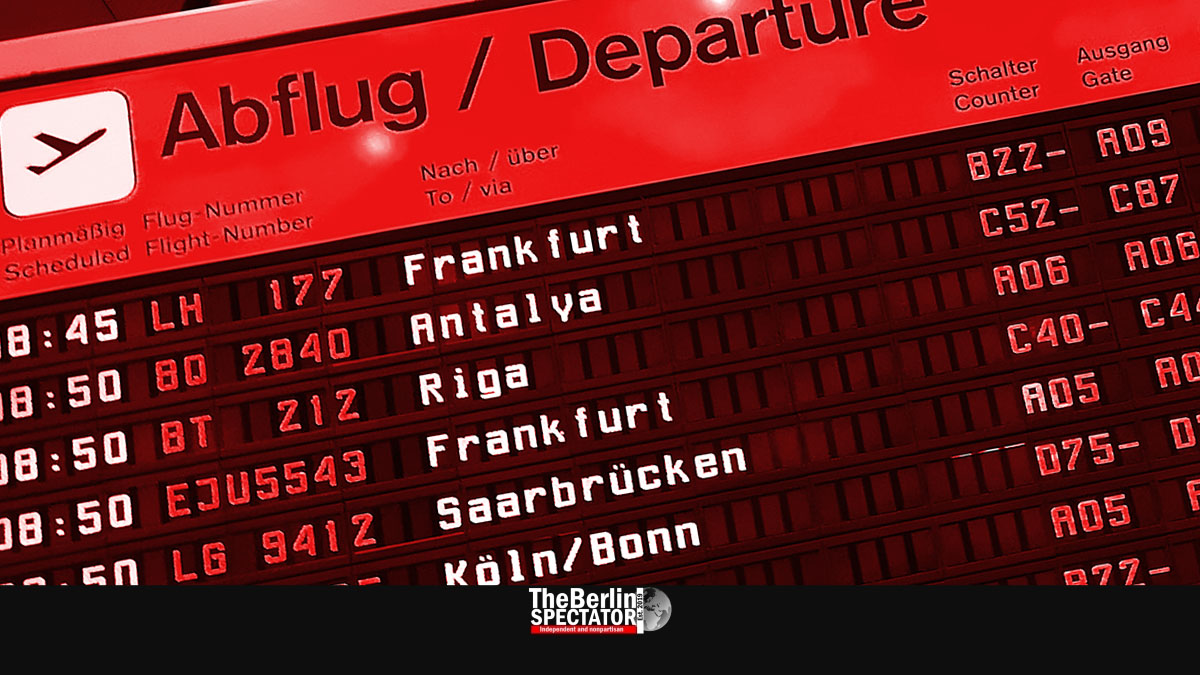 For the second time within a week, the German Verdi Union called on security personell at most big airports in Germany to participate in a warning strike. As a result, many flights will have to be cancelled again.

Berlin, March 21st, 2022 (The Berlin Spectator) — A rather bad mess is expected to hit almost all major airports in Germany on Tuesday. Today, the Verdi Union called for a new warning strike which is supposed to involve hundreds of security agents employed by companies that cooperate with airports all over the country. When they are not at work, passengers cannot go through security checks, and therefore they will not be boarding flights.

The new strike will affect Frankfurt Airport, Germany’s biggest airline hub, BER Airport in the Berlin Brandenburg region as well as the airport in Bremen, Cologne Bonn Airport and the ones in Düsseldorf, Hamburg, Hanover and Stuttgart. In Frankfurt, only transit passengers are supposed to be checked on Tuesday. This means persons who come in on international flights, including intercontinental ones, who intend to board connecting flights, can probably do so.

Verdi wants to put more pressure on the employers ahead of the next round of negotiations which are scheduled to take place on March 24th, 2022. While the Federal Association of Aviation Security Companies (BDLS) seems to be ready to agree to a pay raise of 22 percent, Verdi wants more. Apart from an increase of the hourly wage for security agents by 1 Euro, the union insists on an adjustment of salaries in certain regions.

In addition, Verdi demands 12-month contracts and raises for baggage workers and other employees. The employers disagree. It was unclear how much damage the next warning strike will do in terms of lost revenue for airlines and airports in the middle of the Corona crisis which has caused existential problems for the entire industry. The union, on the other hand, wants its demands met in spite of the pandemic.

Last Monday, BER Airport and Hamburg Airport had been affected by warning strikes. On Tuesday, other airports followed, including the big one in Frankfurt am Main. Depending on the number of security agents who take part in the walkouts, things could be worse tomorrow.

The Berlin Spectator now has a newsletter. You can subscribe here if you want to:

Apart from Corona, the Kremlin’s war of aggression against Ukraine has hit the airline industry. There are no flights to or from Ukraine and Russia, because of both the danger and the embargo. European airlines cannot fly through Russia’s airspace either, which means they burn more kerosene on their way to Asia or Australia. Bypassing the largest country in the world is expensive.

Passengers with reservations on Tuesday are being asked to check the status of their flights before they go to the airport.

Germany: Warning Strike Leads to Cancellation of Most Flights at Most Airports