Germany: Warning Strike Leads to Cancellation of Most Flights at Most Airports 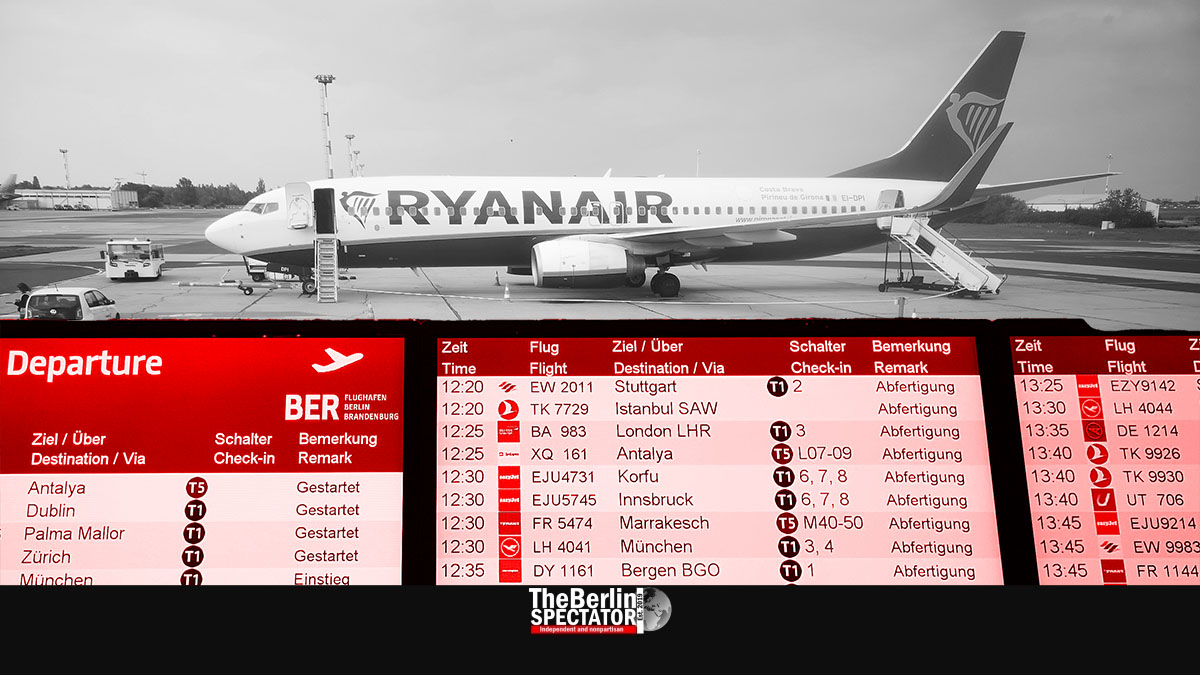 The airports in Frankfurt, the Berlin Brandenburg region, Hamburg and five other German cities were a sorry sight this morning. Hundreds of security agents started a warning strike. ‘Cancelled’ was the most popular flight destination.

Berlin, March 22nd, 2022 (The Berlin Spectator) — Trains do not have wings. Still, Lufthansa lists them as flights at Frankfurt Airport. At 7:08 this morning, flights were supposed to leave to Cologne Bonn Airport and to Münster. In both cases, the status information they gave was “train”. And they had a good reason to do so. On Monday, the Verdi Union announced a warning strike most security agents at most of Germany’s major airports are now part of. The walkouts are supposed to last all day (see separate article Germany: More Walkouts to Disrupt Flights at Eight Major Airports on Tuesday published on Monday evening).

At Frankfurt Airport, many flights that were not listed as trains were cancelled. But some did leave or prepare for departure, including Lufthansa’s flight to Roma at 7:25 a.m. and United Airlines’ flight UA to Chicago’s O’Hare Airport at 8:40 a.m.. Other than that, the departures list was a sorry sight. At least the incoming flights from America were not turned back. American Airlines’ flight from Dallas-Fort Worth landed at 7:02 a.m., Lufthansa brought in its passengers from Miami and Air Canada’s flight from Montréal was about to land shortly after 7:00 a.m.. Most international flights seemed to be allowed to pick up new passengers.

Also, transit passengers were supposed to be checked in for connecting flights, especially international ones. But many of them, those who intend to continue on to other German cities, will likely end up on trains without wings, just like everyone else.

At Munich’s Franz Josef Strauss Airport (German spelling: Strauß), things looked pretty good, because it is the only major airport in Germany that was not supposed to be affected by the warning strike today. A few domestic flights were cancelled here too, including the ones to Berlin and Düsseldorf in the evening, because the strike hit those destinations. Other than that, the departures list looked as good as it usually does.

The exact opposite was the case at BER Airport in Schönefeld (Brandenburg), a town located just outside Berlin. The new airport’s departures list looked bad. Some 80 percent of all flights were cancelled on Tuesday. But those to Fuerteventura, Tenerife, Brussels, Madrid and Porto were supposed to take off. The aircraft that came in from those cities and islands were allowed to accept new passengers, and return.

At Hamburg Airport, ‘cancelled’ was the most-used word this morning. It was written all over the arrivals and departures board too. If ‘Cancelled’ was a flight destination, it would be a very popular one. Apart from Hamburg, Berlin and Frankfurt, the Cologne-Bonn Airport was directly affected by the warning strike. The same applied to Bremen, Düsseldorf, Hanover and Stuttgart.