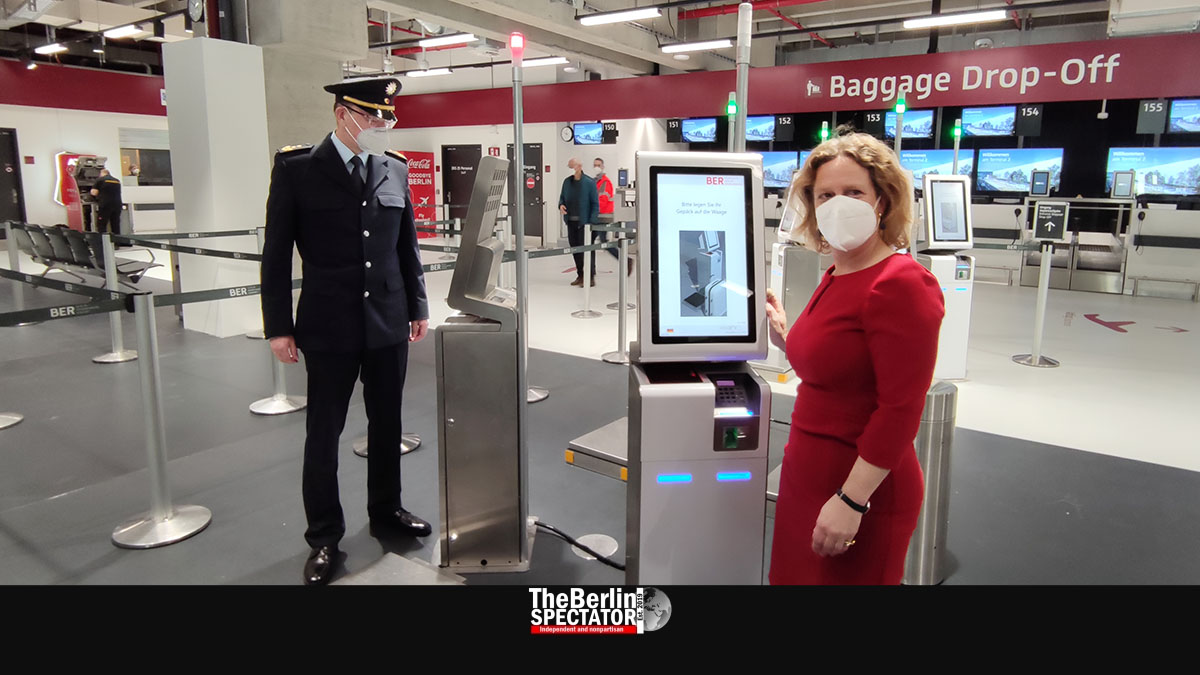 BER Airport now has more room which it mostly does not need. Its new Terminal 2 was presented today. The first passengers are supposed to use it tomorrow.

Berlin, March 23rd, 2022 (The Berlin Spectator) — BER Airport has been in the news for many years now. There is always something to report. First, its conception was in the headlines. Then, for a decade, countless stories explained why the new airport for the Berlin Brandenburg region just could not be completed. Once it finally was, the opening of Terminal 1 was a big story (read ‘The Eighth Wonder of the World: BER Airport Finally Opens‘).

If there was a contest for opening and closing terminals, BER Airport would win it. A few days before the new one was inaugurated, former Schönefeld Airport was turned into BER’s Terminal 5. A few months later, it was closed again because nobody needed it due to the declining number of passengers in the ongoing Corona crisis. Then, the opening of Terminal 2 was postponed because of the pandemic. Now, it is being opened in spite of it.

Why does BER Airport even have a Terminal 2? This has to do with exploding passenger numbers before Corona hit. A strong trend of this kind was registered in 2017. In December of 2019 2019, the 35 millionth passenger of that year was identified at Schönefeld Airport. He got a voucher for the duty free shop and a miniature aircraft. At that moment, when the sky was still the limit, BER Airport was 10 months away from its inauguration. It would replace both Schönefeld and Tegel Airport, but only has a capacity of 28 million. Terminal 2 and former Terminal 5 were supposed to cover the rest.

At today’s event, Aletta von Massenbach said Terminal 2 had actually been completed in the late summer of 2020, as intended. At that point, when something at BER finally worked the way it had been planned, the inauguration of Terminal 2 was scrapped because the number of flight passengers had decreased by up to 99 percent. “We had a difficult year 2021”, she said. Of course, 2020 was even worse.

In the fall of 2021, the decision to open Terminal 2 in spite of it all had been taken, Aletta von Massenbach stated. She explained that certain processes take longer because of Corona. The company FBB, which she is the CEO of, came to the conclusion that more room would help streamline those processes. That is why the passengers for the first flight will be welcomed at Terminal 2 tomorrow.

According to Mrs. von Massenbach, FBB is expecting a total of 17 million passengers this year, which is a lot more than in the past two years, but less than half the 35 million passengers who were counted in 2019. In theory, Terminal 1 could handle those passengers but, especially in summer, there are moments at which the BER Airport will be hitting its full capacity. So, in spite of billions of Euro of losses, Terminal 2 is ready to rumble. Ryanair is the airline that will be using it. Passengers for some flights by other airlines might see its inside as well, once in a while.

Terminal 2 is not just any airport terminal. “Processes here will be quick. This is a very compact building, a so-called processor building”, Aletta von Massenbach said. She also stated it could not function without Terminal 1. That is because all gates for departing passengers are located there. A bridge connects the two parts. All Terminal 2 passengers will enter Terminal 1 before they board the aircraft they are supposed to be on.

In Terminal 2’s main hall, there are more check-in machines than check-in counters. It shows us what airports of the future will probably look like. Here, the passenger checks in himself, or herself, weighs the luggage he or she wants to check in and places it on a conveyor belt afterwards. Yes, passengers do all the work themselves. Soon, they will probably be serving orange juice and checking, fixing and flying those planes themselves too.

The very first flight to “leave from Terminal 2” (not really, because the gate is in Terminal 1) goes to London Stansted. It is Ryanair’s sold out flight no. FR177 with 189 passengers. When the pilots set takeoff thrust, reach ‘V2’ and fly into the afternoon sky at 14:00 hrs. on Thursday, they will know they were the first. Later this week, all Ryanair passengers will be going through the functional new terminal.

Just like FBB, the Federal Police is happy. Karl-Heinz Weidner, its Berlin Chief, said the modern infrastructure at Terminal 2 would accelerate the process of security checks. Almost twice the number of passengers can be checked per line, since the processing time is cut in half.