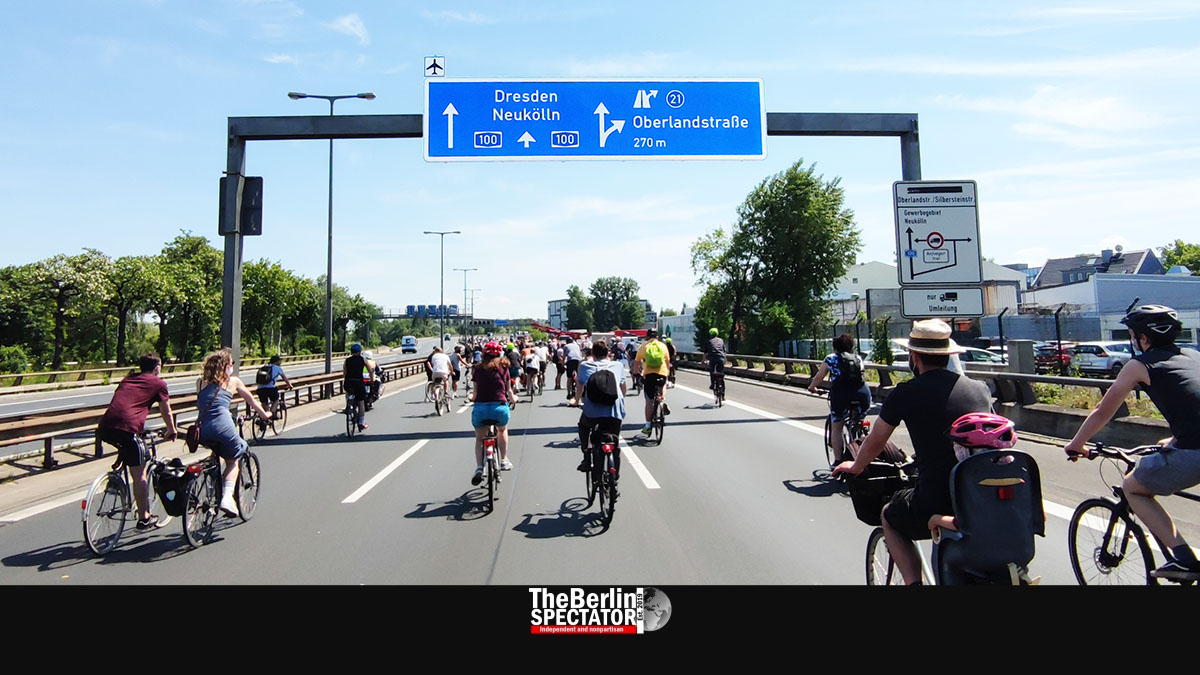 In Berlin, the implementation of projects takes a long time. This applies to an endeavor hundreds of thousands of cyclists are waiting for: bicycle highways. Now, the second of six steps was finally reached.

Berlin, March 25th, 2022 (The Berlin Spectator) — In 1969, Dennis Hopper and Peter Fonda were the personifications of coolness on their loud choppers that did spread CO2. Today, fifty-three years later, cyclists look a lot cooler than those who ride motorized bikes. There are more and more cyclists in Berlin. Because they help Germany reach its climate goals, and due to the fact that the allocation of space on the streets of the capital is not supposed to favor the car that much anymore, cyclists will have their own highways in Berlin.

There was a lot of talk about this in 2019. Since, feasibility studies were conducted for ten planned bicycle highways. The ones for the ‘Reinickendorf route’ and the ‘Mittel – Tegel – Spandau’ route were just completed. As of this moment, seven out of ten bicycle highways are now in their preplanning stages, which means they will probably be available in the year 3000 if the project keeps on dragging on the way it has until now.

Sure, there are good news too: For the two routes mentioned, the result of the feasibility studies turned out to be positive. The cost-benefit ratio is good and the projects are feasible. What this means is that the traffic infrastructure along the way can be altered accordingly. According to Berlin’s Senate Administration of Mobility and the Environment, “the prestage for an advanced planning of all ten evaluated bicycle highways is completed”. It probably took a week to construct this sentence.

On the route from Berlin’s Mitte district via Tegel to Spandau, the experts who are dealing with the planning on computer screens favor a solution that includes an installation of those fast bike lanes next to existing main artery roads for motorized vehicles 58 percent of the way. There will likely be stretches with bidirectional bicycle highways and others with monodirectional ones on both sides of the street. According to the people in charge, this particular bicycle highway will be 14.8 kilometers (9.2 miles) long. In the preplanning phase that is now commencing, all kinds of aspects will be checked, including the environmental friendliness on certain stretches.

The length of the Reinickendorf route is supposed to be 10.8 kilometers (6.7 miles). It will connect Berlin’s northern city limits in the Reinickendorf district to what will be the Schumacher neighborhood soon and the Urban Tech Republic at former Tegel Airport. In this case, cyclists will cover two thirds of the distance next to main traffic arteries. Again, it will contain bidirectional parts and monodirectional ones on both sides of the street.

All in all, the results of the feasibility studies for all ten planned bicycle highways were positive. An issue popped up on the shortest one called ‘Spandauer Damm – Freiheit’ from Spandau to Westend. In this case, the project is feasible part of the way only. The seven remaining bicycle highways are supposed to connect Nonnendammallee to Falkenseer Chaussee, go along the city’s ‘equator’ (western and eastern route) and cover the north-western, north-eastern, south-western and south-eastern parts of the German capital. From all areas, cyclists will have the possibility to race to the two city centers Berlin has.

So, the feasibility studies were the first step, and the preplanning stage is on right now. Afterwards, it will be time for the design documentation, the authorization process (yawn) and the detailed design phase (snore). By the time the building phase begins, probably in the year 2999, excitement will likely start spreading.