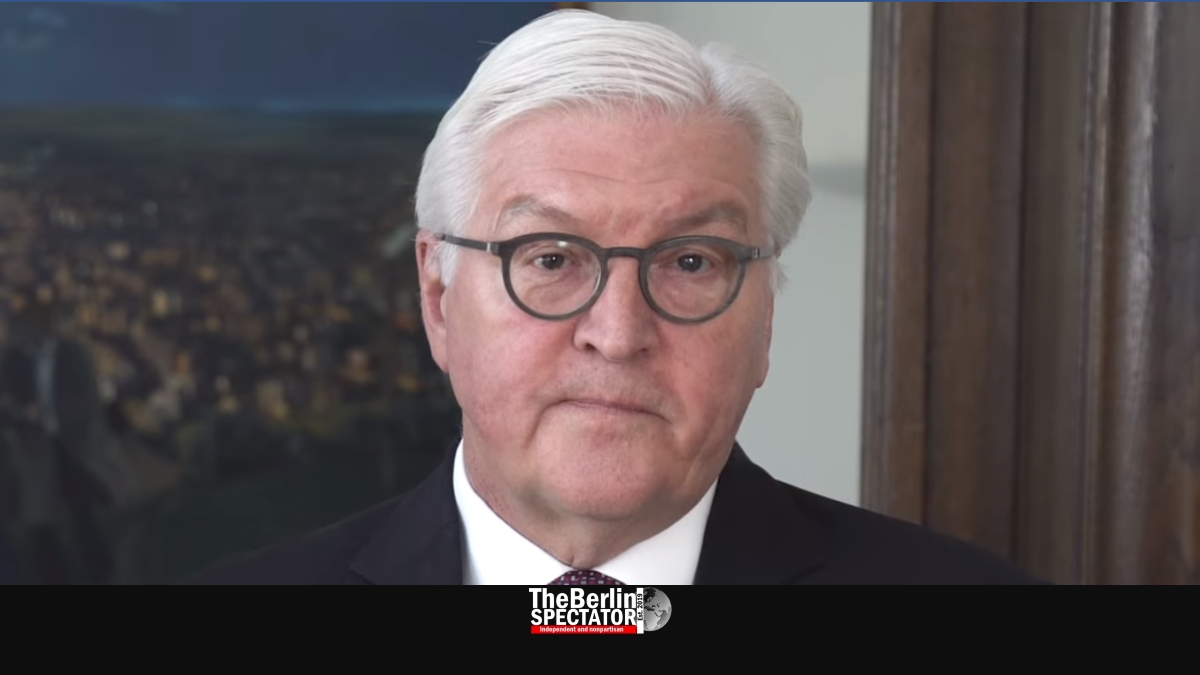 At Bellevue Palace, Frank-Walter Steinmeier and the Berliner Philharmoniker orchestra invited guests to a concert for Ukraine on Sunday. Germany’s President said the displacement of millions was “a catastrophe on a scale unseen in Europe since WWII.”

Berlin, March 27th, 2022 (The Berlin Spectator) — Not everyone accepted President Steinmeier’s invitation to a solidarity concert for Ukraine at Bellevue Palace on Sunday. On Twitter, Andrij Melnyk, the Ukrainian Ambassador to Germany, complained it was “an insult” that only Russian soloists would perform, and no Ukrainian ones. He announced he would not accept his invitation for that reason. The Federal President’s Office had announced “musicians from Ukraine, Russia, Belarus, Germany and other countries” would play “compositions by Ukrainian, Russian and Polish composers” without volunteering information about soloists.

In a televised speech at the event, Steinmeier said both he and his wife were infected with the Coronavirus and could not be at the concert for that reason. “Ladies and gentlemen, even before the first note has sounded, everyone can sense the tension inherent in this concert – or, to put it another way, the contradictions it reveals”, the President told the guests. “Here we have this festive, brightly lit hall, we have the musicians and the audience, dressed in their finery and looking forward to some marvelous music. A picture of harmony, a picture of civilized culture, a picture of a contented and peaceful Sunday.”

“And there, in stark contrast, we have the reason for this concert: Russia’s brutal, illegal and inhumane war of aggression against Ukraine”, Frank-Walter Steinmeier stated. “The brave and intense struggle by the Ukrainian people for freedom and self-determination. The horrors of this war, the dead and the wounded, the increasingly mindless destruction, the targeted attacks on the civilian population.”

He said millions of people were “fleeing their beloved homeland in the face of Russian missile attacks, mainly women and children, having to leave their husbands, sons and fathers behind to an uncertain fate.” Steinmeier reminded his guests of the fact that ten million people have been displaced. “This alone is a catastrophe on a scale unseen in Europe since the Second World War. These are terrible days and weeks. We are all in a state of shock, we are all appalled by what is happening in Ukraine.”

“Many people in Germany would like to help, would like to find some way of showing their solidarity and compassion”, the President continued. “And many are indeed helping, particularly by assisting those seeking refuge, be it through their donations, by offering support for those arriving in Germany or by taking refugees into their own homes. I am very grateful for all of this.”

President Steinmeier stated many people, in Germany too, were afraid. “A war is being fought in Europe. For older people, this is reviving deeply buried, harrowing memories. For younger people, it is a horror they could not conceive of. A major nuclear power is seeking to subjugate and destroy a neighboring country. And all this barely a two-hour flight away.”

“I can understand the fears in our country. And I cannot simply take them away”, Frank-Walter Steinmeier conceded. “Nobody can. But we can counter this fear with our steadfastness and our humanity and solidarity, with our determination for peace to prevail, with a belief in freedom and democracy – which we will never surrender, which we will always defend.”

“I am well aware that a belief in freedom and democracy alone will not stop any tanks. But I also know this: no tanks can ever destroy this belief. No army, no oppressive regime is stronger than the allure of freedom and democracy in the hearts and minds of the people. Not in Ukraine, not here, not anywhere.”

“Following my re-election on 13 February I said: ‘Mr. Putin, do not underestimate the strength of democracy!’ We now know that he did underestimate it”, Steinmeier said on Sunday. “He underestimated the Ukrainians’ strength, courage and love of freedom as well as the unity and resolution of our alliances, of the European Union and NATO.”

“I have all the more reason to tell us and our compatriots: We can and must build not on this fear, but on the very things we are countering it with, on the power of freedom and democracy. We know what we stand for, and we know what we have to defend. Our hearts beat hotly at the injustice of this war. Our heads must remain cool as we recognize our responsibility. That is what matters now.

Steinmeier said with the concert he wanted to express “our solidarity with the people in Ukraine and with the refugees. The illustrious Ukrainian composer Valentin Silvestrov is among those who have been forced to escape the bombing – now, at the great age of 84. I am glad and grateful that he is here today, and that this concert will begin with his music.”

The Federal President explained the concert at Bellevue Palace was “an affirmation of freedom and peace, an affirmation articulated in unison by musicians from Germany and Ukraine, from Russia and Belarus. Your stance against this criminal war is a question of humanity, not of nationality. So let us beware of all-in hostilities and refuse to engage with Putin’s pseudo-historic nationalistic delirium. We must not permit Putin’s hatred to become a hatred dividing peoples and individuals, and it must not be allowed to divide our society either.”

“Let us keep this in mind as we listen, following works by Silvestrov and Chopin, to the music of two great Russian composers, Tchaikovsky and Shostakovich”, the President stated. Then he asked a rhetorical question: “Indeed who could tell us more about the cruelty of totalitarianism in his own country than Dmitri Shostakovich?”

“This concert can and should give us encouragement”, Steinmeier told his guests. “It can and should give us renewed strength. We need that strength. Because the injustice of this war concerns us all, it must not remain unanswered. We cannot merely distance ourselves and shrug our shoulders. The vast majority of people in Germany are well aware of that, and are willing to accept hardships.”

“Not only our humanitarian solidarity is required. Germany will also continue, with its allies, to support the Ukrainians’ brave battle for their country. We are helping them defend themselves against this brutal invasion. And we have imposed tough sanctions that are intended to make it impossible for Russia to continue its destructive and inhumane policies”, Frank-Walter Steinmeier explained. “These tough sanctions will inevitably also bring uncertainties and losses, for us too. We will have to be prepared to accept them, if our solidarity is to extend beyond mere lip service, if it is to be taken seriously.”

“Yes, harder days are ahead for us in Germany too”, he said. “Days that will change the world, and that will change us, perhaps faster than we would ever have thought possible. The plain truth is that many hardships still lie ahead. Notwithstanding all the ongoing diplomatic efforts to end the war, our solidarity and our support, our resilience, as well as our willingness to accept austerities, will be needed for a long time to come.”

“But let us not lose our confidence. Perhaps it may be helpful, in the difficult weeks to come, to recall the words of the great humanist Lev Kopelev, a son of Kyiv, in his acceptance speech upon being awarded the Peace Prize of the German Book Trade four decades ago: ‘Certainly there are people of good will in all countries of the world, people of different nations and classes, of different faiths and beliefs, but of one good will.'”

“All of you artists from Ukraine, from Russia, Belarus and Germany, are playing today out of precisely that shared good will. Or, as Kopelev put it, ‘they all have strengths that are more enduring and more effective than any bombs or missiles can or should be. One only needs to recognize and learn to use them'”, President Steinmeier said.

He concluded his speech by saying Kopelev had been far from naive. “He himself had known and suffered the brutality of the Soviet regime. And just like him, we too know that when faced with war, the power of good will is not the only force on which we can rely. But we do have to know what we are building on and what we are fighting for.”