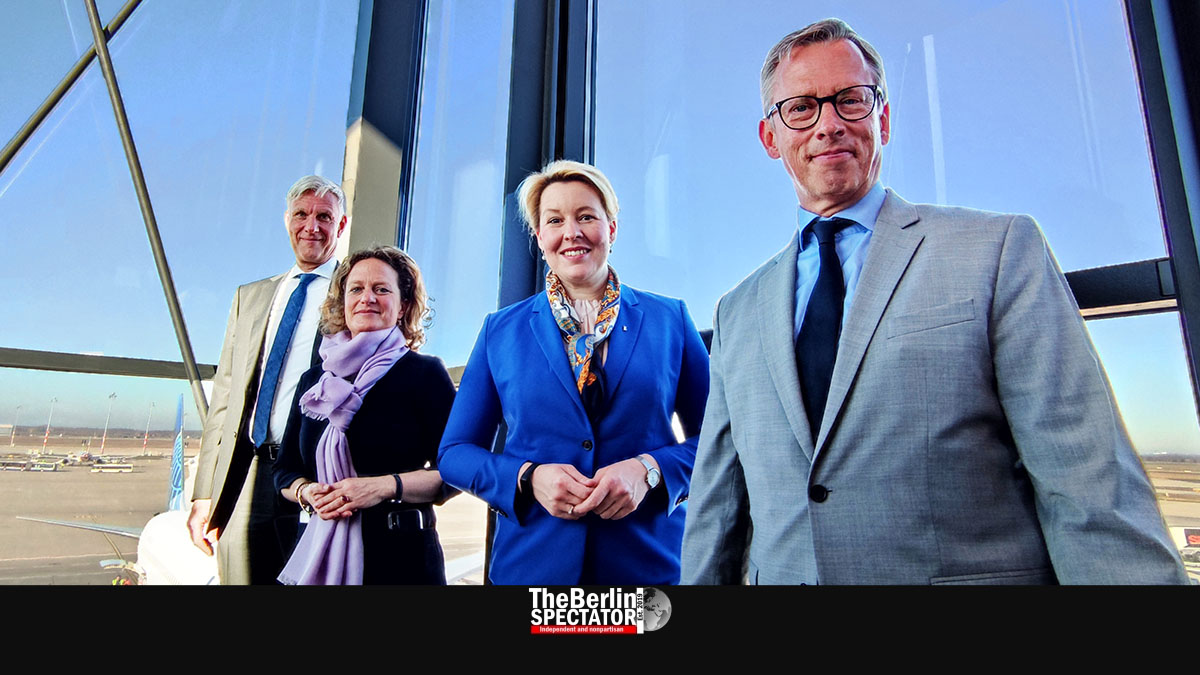 The very first direct flight from Berlin’s BER Airport to America is on its way. Governing Mayor Franziska Giffey spoke to passengers before they boarded the plane. United Airlines’ plans to offer direct flights to another U.S. destination too were scrapped.

Berlin, March 28th, 2022 (The Berlin Spectator) — In at least one way, Berlin is a provincial town. The German capital’s new airport has a flight route to Singapore, some to Middle Eastern destinations like Tel Aviv or Doha and a new one to Newark, New Jersey, which is the first direct flight to any destination on the American continent, ever. These are the only intercontinental flights BER Airport has to offer.

That is why United Airlines flight no. UA963 caught the attention of Berlin’s Governing Mayor Franziska Giffey today. She came to BER Airport, spoke to passengers, to airport boss Aletta von Massenbach and airline representatives. A strong economy needed good flight connections, Mrs. Giffey stated. “We are glad United Airlines took this decision.” According to her, the daily flight will help Berlin as a tourist destination, but also as a trade fair and congress location. Economic ties would benefit from the new flight too. So would the science community, the Governing Mayor said. “This is a big chance and a signal for the restart of Berlin’s economy after the pandemic.”

“Here, we have a fully booked aircraft”, Franziska Giffey stated in BER Airport’s gates area, from which she pointed at the plane. The Mayor said she had spoken to a couple who had told her they had chosen to go to New York because of United Airlines’ offer. “We assume that there are people on the other side too who will decide to go to Berlin because of the new direct flight offer”, she stated. “This is a good day for Berlin’s economy, for Berlin’s tourism and a good day for the German-American friendship.” In times like these, this was a very important aspect.

“This is a very important step towards normality”, Aletta von Massenbach said. “Usually, one would not celebrate a flight route from Berlin to New York, because connections of this kind are normal. But we are happy today anyway.” She stated a lot of effort had been required to get the route up and running. Everyone knew why it had not been operational for two years. She was referring to the last time United Airlines took off towards New York from Berlin’s former Tegel Airport, before the Corona pandemic hit, and before BER was opened on October 31st, 2020. “We are looking forward to many happy landings”, Mrs. von Massenbach said.

United Airlines was going to offer direct flights to Dulles Airport in Virginia as well, but the plan was scrapped because of the Corona situation and the Russian war of aggression against Ukraine. This does not seem to be the right moment for experiments, from the perspective of airlines. Ads for flights to Washington D.C. were still displayed at BER Airport. They will probably be changed soon.

All seats on the 31-year-old Boeing 767 United Airlines sent were sold, meaning this is a good start, especially for frequent flyers based in Berlin. Stefan Franzke, a businessman who was booked on the flight, told The Berlin Spectator he could spend a relaxing Sunday in Berlin because of the new flight route. He said it had saved him an entire day. Besides, he believed these kinds of direct flights decreased the world’s CO2 emissions because the more there were, the less connecting flights were needed.

At the airports in most other Western European capitals, a direct flight to New York is not exactly a sensation. But this case is different because of Germany’s history. Before the reunification, West German airlines were not allowed to fly to Berlin at all. That is one reason why Frankfurt Airport developed into a major hub. It is far more important than BER Airport, even today. The same applies to Munich’s airport.

The advertising slogan United Airlines picked for its new flight route between Berlin and New York was very appropriate: ‘Re-United‘. First of all, it is a United Airlines flight. Secondly, those two metropolises mentioned are connected now, meaning their were reunited, in a way. Thirdly, Berlin is a reunited city in a reunited Federal Republic of Germany. Amen.