‘WTF Berlin’: Jacinta Nandi Explains all the Weirdness We Run Into in the German Capital 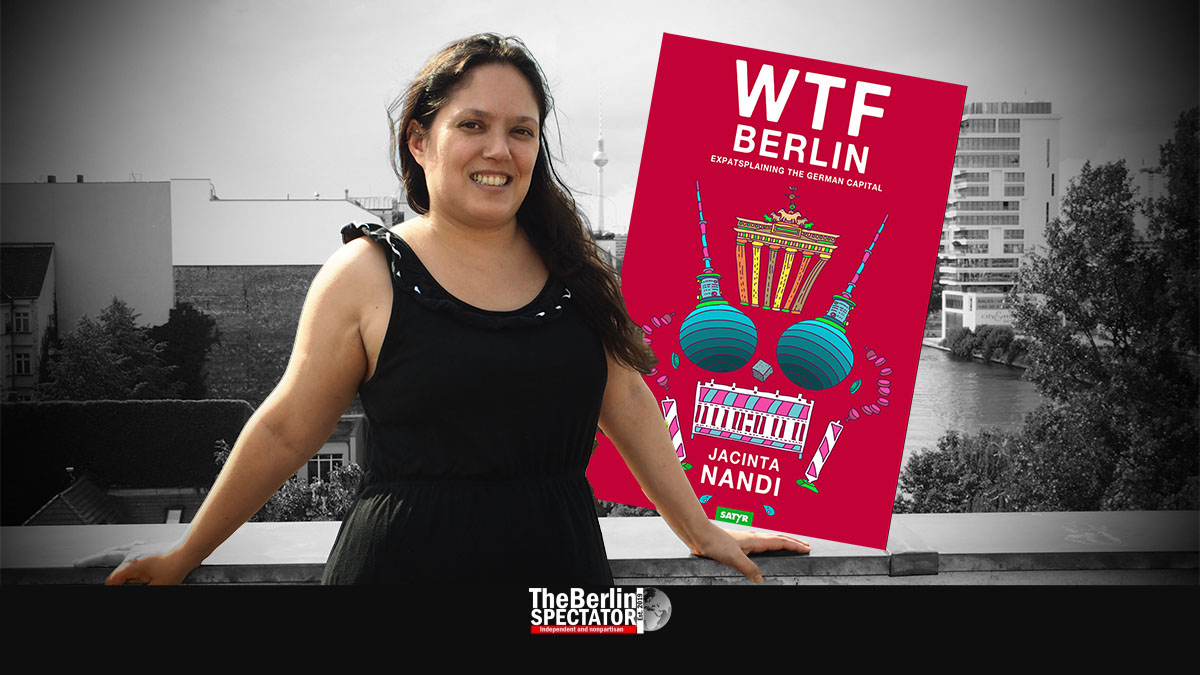 It was about time for an honest Berlin guide, one that tells us what we really have to expect. Thanks to Jacinta Nandi, the wait is over. She lists all the BS around us which nobody had the courage to address.

Berlin, March 30th, 2022 (The Berlin Spectator) — Sound the alarm! Foul language ahead, including the f-word. Ready? Here we go: ‘WTF Berlin’ would have to be written right now if Jacinta Nadi had not done so already. Eleven years after Roger Boyes came up with ‘A Year in the Scheisse: Getting to Know the Germans’, a book that could be a sequel is about to be released.

Like Boyes, Jacinta Nandi delivers an overdose of brutal honesty about the land of sausages, cuckoo clocks, nude beaches and vehicles with stars on their hoods. She expresses almost philosophical thoughts many of us have had. The difference is that she comes up with answers. “I think it’s okay to live here for twenty years and still not know your adjectival endings”, she writes. “[…] But it’s not okay to judge non-native speakers whose English isn’t perfect when you’ve been living in the country for seven years and still can’t order yourself a fucking Orangensaft.”

“Jacinta Nandi has seen through us all”, the German author Leo Fischer concedes. He states she had written “a devastatingly accurate report on the German nation.” The man is right. “In this collection of short texts, she’ll tell you everything you need to know about stingy male ‘feminists’, oppressive church taxes, unnecessary Anmeldungen – and how to make the perfect German Abendbrot (exhausted cucumbers are key)”, the official description of ‘WTF Berlin’ reads.

The author holds the mirror up to us Germans. Many of us will wish she hadn’t. But, in today’s world, some truth can’t hurt. Jacinta Nandi does not flinch from ridiculing herself a little, at moments at which she tried to deal with all the German bullshit, most notably during an appointment at the OB/GYN, but she mostly mocks those who deserve it, namely us Germans.

She is the first to identify the “important German greetings etiquette: Greet each other in the coldest voice imaginable, and then say absolutely nothing to each other ever again as long as you both shall live”. Jacinta Nandi also uncovers “the weirdest thing about Germany, of all the weird things. […] When you rent a place they don’t just take the light bulbs out – but all the light fixtures, too. You have to literally pay electricians or bribe ‘Hausmeisters‘ you once fucked to connect the wires together and stuff. I have no idea why people do this.” Well, neither do we.

According to Satyr, the publishing house that will be releasing ‘WFT Berlin’ in May, “Jacinta Nandi was born 1980 in east London and moved to Berlin aged 20.” It took us a while to figure out that she must have moved here in or around the year 2000. “She writes in German and English and has published four books in German.” Apparently, she “also writes and blogs” (What’s the f***ing difference?) for The Berlin Spectator’s competitor we will not mention here, namely the ‘Exberliner’. She is the mother of two boys and lives with them in sleepy Lichtenrade.

If there was a prize for the most courageous expatriate in the city, and for the best analysis of weird German bullshit, it would have to go to Jacinta Nandi. If we could, we would employ or adopt her. Or both. She is our heroine. Thank you.

‘WTF Berlin’ can be pre-ordered here (link to Amazon Germany).

Berlin to Drop Most Corona Rules on April 1st, 2022