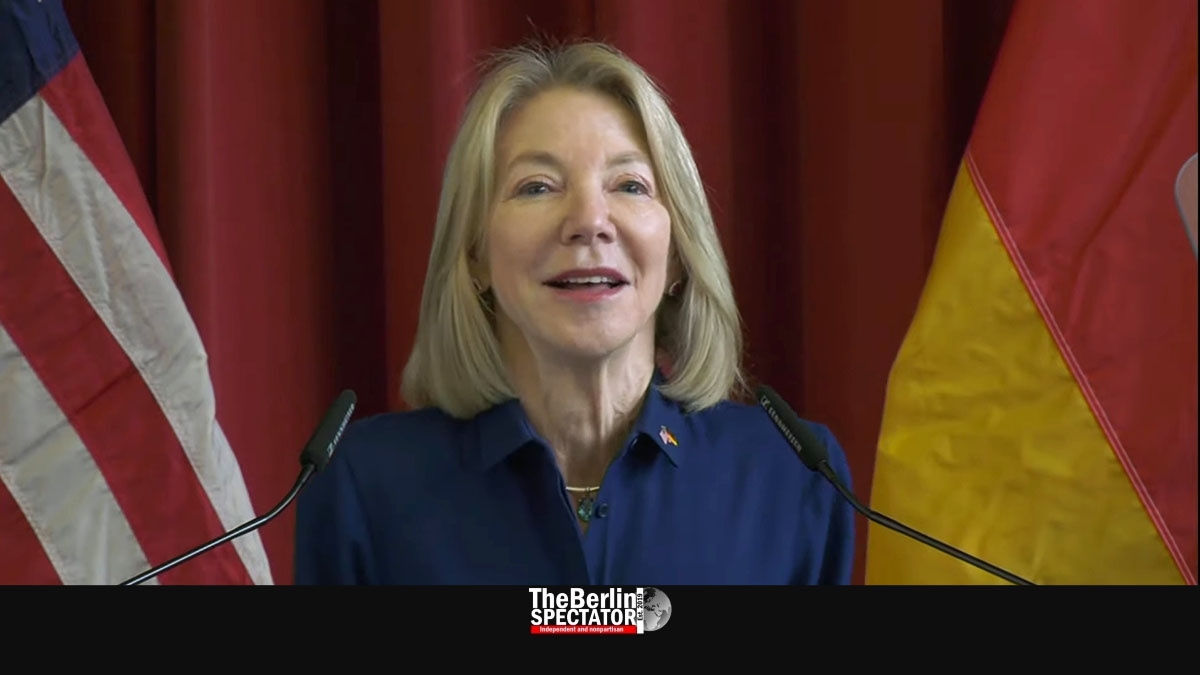 Amy Gutmann, the new U.S. Ambassador to Germany, held her first public speech in Berlin. At Freie Universität, she talked “about the difficult road to democracy that we often take for granted, and about what these times of great change require.”

Sofia, Bulgaria, April 6th, 2022 (The Berlin Spectator) — Just after Ambassador Amy Gutmann presented her credentials to Germany’s President Frank-Walter Steinmeier in February, she took part in the Munich Security Conference. At Freie Universität she said, the main topic had been the potential consequences of a Russian invasion [of Ukraine]. “Days later, Russia invaded, with a brutality that absolutely shocked decent people worldwide”, the Ambassador stated.

She said there had indeed been consequences for President Putin. He had never foreseen them. “He thought Ukraine would fall. Ukraine stands strong against his brutal forces. He thought he would show the absolute might of Russia. Russia is shown to be no might against the force of Ukraine and their courage. He banked on NATO being split. NATO has never been more united than it is today”, Amy Gutmann told the audience.

“I see that unity in our work with partners at all levels of the German government and German civil society.” Ambassador Gutmann stated she was “greatly appreciative of that”. She said she knew she spoke “for so many in my country, including the Administration and Congress by saying how grateful we are for Germany and the United States’ unity.”

Amy Gutmann said the unity mentioned was reflected in three key goals that would guide her team’s diplomatic work. “Advance our alliances, innovate inclusively and defend democracy. These goals sound simple, they are short and to the point. But, in fact, they represent the complex and difficult challenges we face in the United States, in Germany and all around the world”, the new U.S. Ambassador said.

“Today we are at another critically important juncture in history.” The coordinated response to Russia’s invasion of the Ukraine demonstrated “a new unity of purpose and action, a new period in trans-Atlantic solidarity. As we confront new threats to global peace and security, the U.S.-German relationship and friendship could not be more important.” According to the Ambassador, the U.S. Embassy in Berlin and its five consulates have a vital role to play “in ensuring a revitalized trans-Atlantic relationship that goes far beyond ending Putin’s brutal, cruel, inhumane war.”

Amy Gutmann’s father Kurt Gutmann was a German Jew from Feuchtwangen who fled Nazi Germany. She said she would visit his birth city soon, for the first time ever. The 72-year-old former President of the University of Pennsylvania is the first female U.S. Ambassador to Germany. She was appointed by President Joe Biden in July of last year.

Amy Gutmann’s entire speech at Freie Universität Berlin can be heard and watched in the video above, posted by the U.S. Embassy.

The Berlin Spectator has a new newsletter. You can subscribe here:

Germany Expels Russian Diplomats Because of War Crimes in Bucha

Germany: The Pandemic Rules We Still Need to Adhere to when We Travel