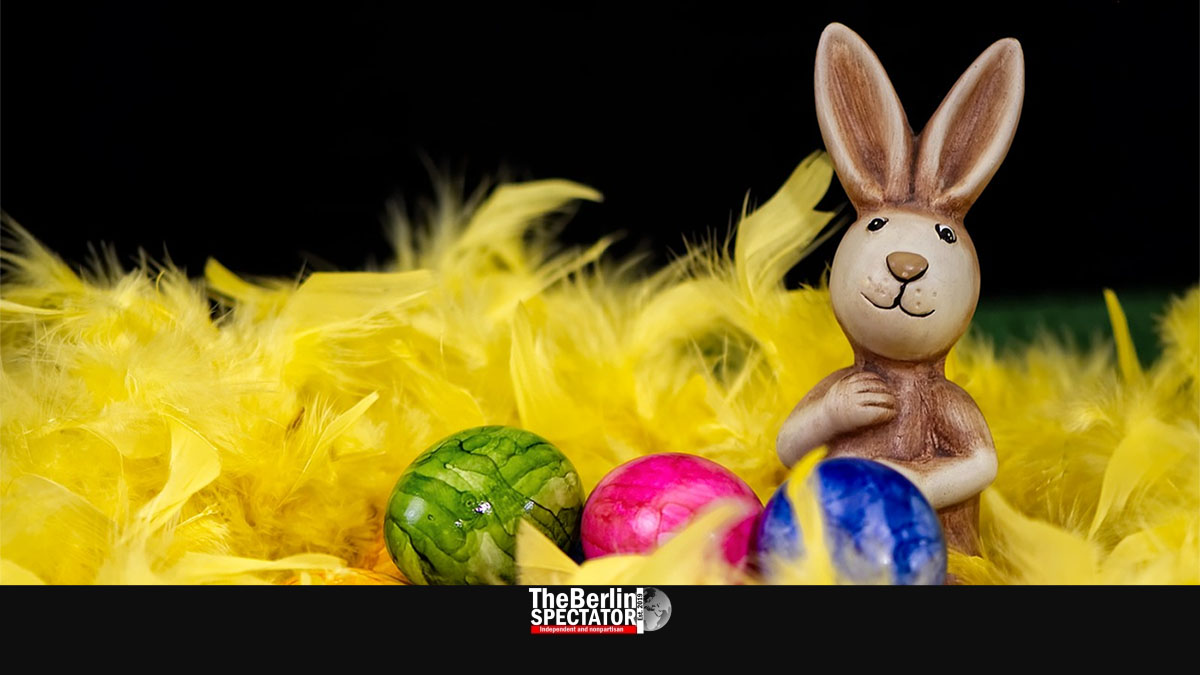 Tens of millions of Christians in Germany celebrate Easter one way or another. Especially in the more devout southwestern part of the country, the Easter mass plays a big role. But most Germans just color eggs and eat.

Sofia, Bulgaria, April 10th, 2022 (The Berlin Spectator) — There are some 45 million Christians in Germany. Among them are about 22 million Catholics and 20 million Lutherans who will celebrate Easter, one of their most important holidays, starting on Good Friday, in a few days from now. The 1.5 million Orthodox Christians in the Federal Republic have different Easter dates, a week later. But all of them celebrate the resurrection of Jesus Christ.

Christian Germans and expatriates, but also many non-Christians, follow some of the Easter traditions and customs that are popular in Germany. More devout Christians will usually go to the Easter Vigil or Easter Mass at their churches. Most other traditions symbolize important aspects of this holiday.

The Easter bunny is not only a commercial item made of chocolate which is offered at supermarkets all over the place. In the Byzantine Empire, the rabbit was a symbol of fertility and virility, aspects that are related to resurrection. But, in some regions, this symbol changed. In parts of Germany, there used to be an Easter fox, in others a rooster or stork. These animals used to bring the Easter eggs to the people. Now, the bunny works overtime since it has to deliver the eggs alone.

Not only in Germany, the Easter egg is another symbol for the resurrection of Jesus, for fertility and life. Many Germans empty the eggs, without breaking them, paint them in all colors of the rainbow and hang them up on tree branches that are in bloom. Full eggs are being boiled for at least 4 minutes, until they are hard, before they are being colored as well. In Germany, the Easter egg hunt is a tradition many people follow. One person in the family hides them, the others search them, until the egg basket is full again. If they miss an egg, they will definitely smell it a few weeks later.

There is more. Easter bonfires are a tradition many German Christians still follow. The idea was to welcome the spring. Fertility, but also growth and a good harvest were supposed to be guaranteed as long as there was a big and nice bonfire. In some congregations, those fires are being lit in front of the church, and used to light the separate Easter fire. Consuming an Easter lamb is yet another tradition.

While the Western Easter commences in Good Friday, which is April 15th, 2022, the Orthodox one begins on April 22nd this year. Tens of millions of Christians observe Easter. Germany’s tiny Jewish community, on the other hand, has its Passover holiday. It commences on April 15th and lasts until the 23rd. Passover commemorates the anniversary of the miraculous Exodus from Egyptian slavery.

The many non-religious Christians in Germany just pick the traditions they like. They mostly go for the egg coloring, the egg hunt and the big meal. And they travel a lot during the Easter holidays. By doing so, they cause pretty bad traffic jams.

We have a favor to ask: As of April 9th, 2022, twenty readers are supporting The Berlin Spectator on a monthly basis. We appreciate everybody’s help a lot. Thank you so much! You know who you are.
But, we need more supporters.
This is the obvious question to you: Would you consider supporting The Berlin Spectator?
Even small donations help. You can choose between one-time contributions and monthly ones. And you have the choice between Paypal and Patreon. You can check out our Donations Page first if you want to. Thank you.

Germany: Lots of Traffic at Airports and on the Autobahn due to Easter Vacations