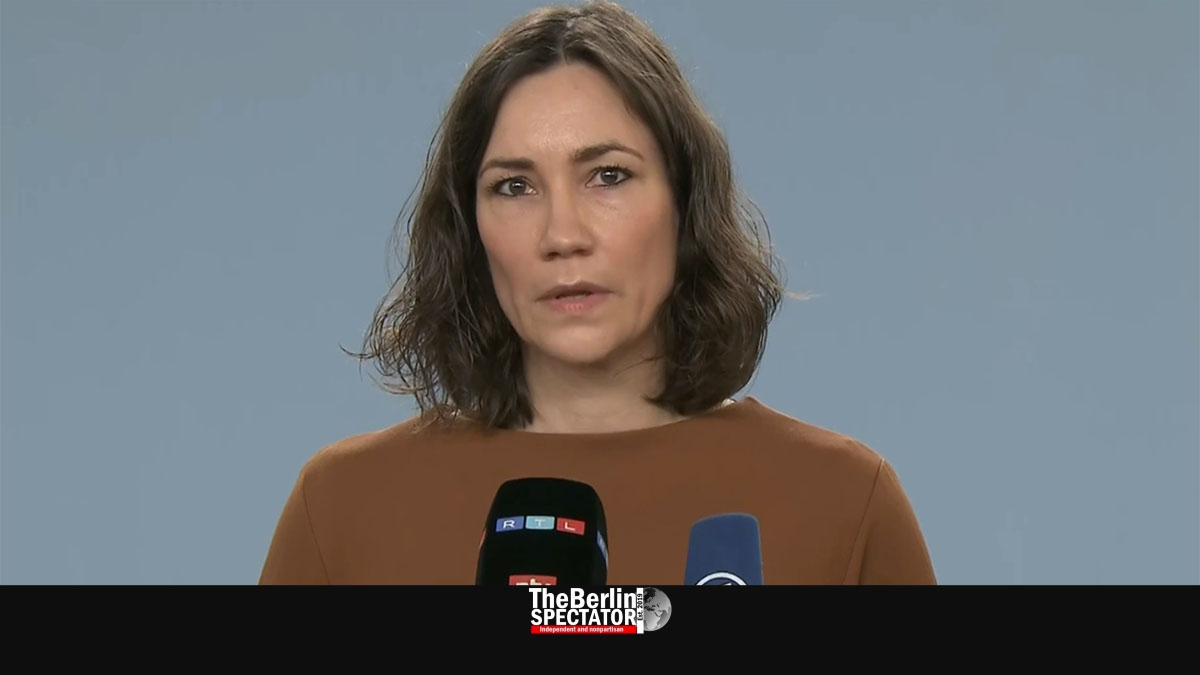 Before the Green politician Anne Spiegel became Germany’s Family Minister in December of last year, she was Environment Minister in Rhineland-Palatinate. In this position, she took a long vacation right after the flood disaster there, in July of last year. Yesterday, she apologized. Today, she resigned.

Sofia, Bulgaria, April 11th, 2022. Update 15:37 p.m. CEDT (The Berlin Spectator) — Family Minister Anne Spiegel resigned today, because of a scandal uncovered by the ‘Bild am Sonntag’ weekly. On Sunday night, she apologized for the priorities she set last year. But this appearance failed to save her political career. Even her own party colleagues reportedly wanted her to resign.

In mid-July of 2021, catastrophic floods hit parts of Europe. Especially the Ahrtal region in Rhineland-Palatinate and North Rhine-Westphalia was affected. In Germany, at least 180 people died in the floods. In the two federal states that suffered most, the governments needed to organize the search for the missing, help for the survivors whose homes and businesses were destroyed, clean-up efforts and the reconstruction of the destroyed infrastructure.

While most politicians in charge worked relentlessly, there were two who did not. Ursula Heinen-Esser (CDU), the Environment Minister of North Rhine-Westphalia, took a summer vacation instead of helping. She stepped down on Thursday of last week because of her scandalous performance back then. Her former colleague in Rhineland-Palatinate, Anne Spiegel, who is Family Minister in Berlin by now, went on vacation with her family. According to ‘Bild am Sonntag’, she also spread false information.

In late July of last year, when flood victims were still missing and hundreds were homeless because of the catastrophe, she went to southern France for a four-week vacation with her family. Even earlier, there had been issues. Just before the floods, an authority she was responsible for as Minister at the time released a statement according to which “no extreme floods” needed to be expected.

Then, ten days after it had happened, she took off to France. During her long vacation, she reportedly returned once, on August 10th, for a public relations appointment. A government spokesman recently stated Mrs. Spiegel had taken part in cabinet meetings online, from France. Now, it turns out she did not. Last night, she appeared in front of TV cameras with an emotional statement.

She said her family had badly needed a vacation because her husband had suffered a stroke in 2019 and could not deal with stress anymore for that reason. Also, her three children had not come through the Corona crisis well. Anne Spiegel admitted she had not joined those cabinet meetings, contrary to earlier statements, but had been reachable throughout her vacation and answered e-mails. On the brink of tears, she apologized.

The priorities Anne Spiegel set in the summer of last year led to calls for her resignation. Friedrich Merz, the chairman of the conservative Christian Democrats (CDU), told ‘Bild’ Chancellor Olaf Scholz needed to dismiss the Minister. He was not alone with this opinion. According to the ‘Bild’ tabloid, the leadership of her own Green party wanted her to resign as well.

Olaf Scholz has been in office since December 8th, 2021. He is heading a coalition that involves his center-left Social Democrats, the left-wing Greens and the center-right FDP. The scandal that surrounds Family Minister Spiegel is the first one to rock the new government.

Omnid Nouripour, one of the chairpersons of Anne Spiegel’s party, the Greens, said her decision to resign had been right. The other party chairperson Ricarda lang stated she had a lot of respect for her courage and clarity.