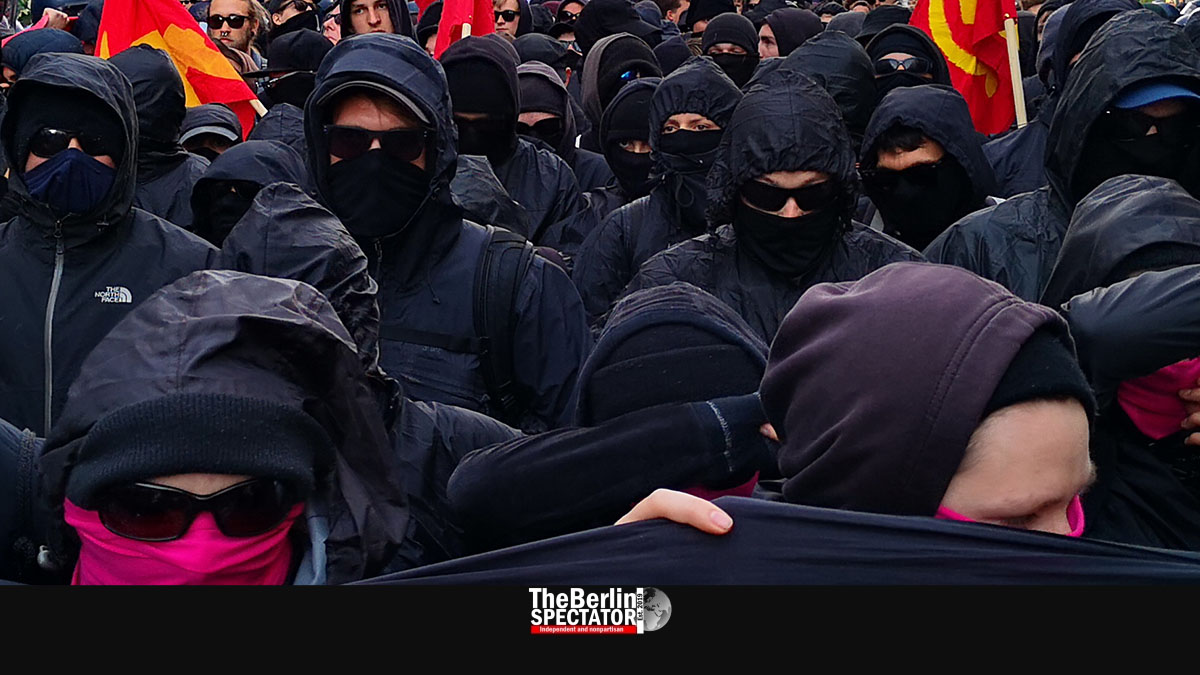 In Berlin, the traditional May 1st rally organized by unions is always peaceful, but the ‘Revolutionary May 1st’ is not. Left-wing extremists intend to make it “a day of resistance against capitalism” again this year. The Berlin Police Department knows what this means. It will follow the overkill approach again.

Berlin, April 12th, 2022 (The Berlin Spectator) — “As the wealth of the rich continues to grow, so do our problems and worries”, a website run by left-wing extremists in Berlin says. “We are becoming poorer because the prices of heat, power and groceries keep increasing, while rent has been costing us large parts of our salaries already. Our exploitation is the foundation on which their wealth has been built.”

The organizers of the ‘Revolutionary May 1st’ protest do not only want to change the direction grocery prices are taking. This is not what makes them radicals. But their intention to change the entire system does. “The capitalist system devours the lives and dreams of workers all over the world”, it says. Every year, this radical protest turns against the state and the police. “Let us declare war against the wars waged by the ones in power!”, the organizers say.

Note: The Berlin Spectator uses the words ‘extremists’ or ‘radicals’ for persons, groups or parties that fight democracy, the state, its institutions, its police and/or its values, on both the far-right and the far-left.

In 2021, the police had to end the protest because of attacks against officers and the participants’ failure to adhere to orders in regard to the Corona rules. One hundred officers were injured and 350 protesters arrested. Every time, the Berlin Police Department (BPD) sends thousands of officers who have to defend the city against the violent participants. Usually, the organizers refuse to even talk to the BPD’s communication teams on site. Instead, they always chant “Everyone in Berlin hates the police!”, a lie which is supposed to escalate the situation. After those ‘Revolutionary May1st’ protests, those who stage them usually accuse the police of having attacked peaceful protesters and what not. Obviously, the truth is not what counts in those circles, but violence and their fight against the state that gives them the right to demonstrate, to express their opinions, the democratic Federal Republic of Germany that supports them in many ways and gives them opportunities.

In the 1980s, the ‘Revolutionary May 1st’ rallies became very violent. When radical protesters attacked the police with stones and set police vehicles on fire, officers reacted with clubs and tear gas only. Since, the police have changed their approach. Today, they always give the ‘revolutionaries’ the opportunity to cooperate, for instance by encouraging them to communicate and cooperate with the officers. Generally, they prevent escalations by following the overkill approach. This basically means the police flank the ‘revolutionaries’. While they do, they pull out individuals they identify as perpetrators of violence and arrest them. This strategy has prevented full-blown street wars from taking place for years.

This year, on May 1st, 2022, the ‘revolutionary’ rally is supposed to commence at Hertzbergplatz in Berlin’s Neukölln district at 4:30 p.m.. Other than that, no details have been announced by the organizers. Still, the Berlin Police Department is already preparing. It will be a challenge, as always. Hundreds of officers from other federal states will have to help their colleagues in the capital. Accompanying the peaceful May 1st demonstration staged by the DGB, the umbrella organization of Germany’s unions, already is a big job, but dealing with violent ‘revolutionaries’ is far more difficult.

Again, the police intend to have many officers in place, probably more than 2,000, in order to be able to react to eruptions of violence anywhere in the city, at any moment. That way, volent protesters can be stopped before the situation escalates further.

While the ‘Revolutionary May 1st’ rally needs to be dealt with, the antisemitic ‘Al Quds March’ was cancelled this year. Before these good news came in, Berlin’s Interior Senator Iris Spranger had announced she wanted to try to ban the event which had been announced for April 30th. The problem is that antisemitic groups are usually part of the ‘Revolutionary May 1st’. Last year, ‘Palestine Speaks’, a group that spreads conspiracy theories about Israel, was part of the ‘event’. The ‘Al Quds March’ was initiated by the Iranian regime. It calls for the annihilation of the only predominantly Jewish state on the planet.