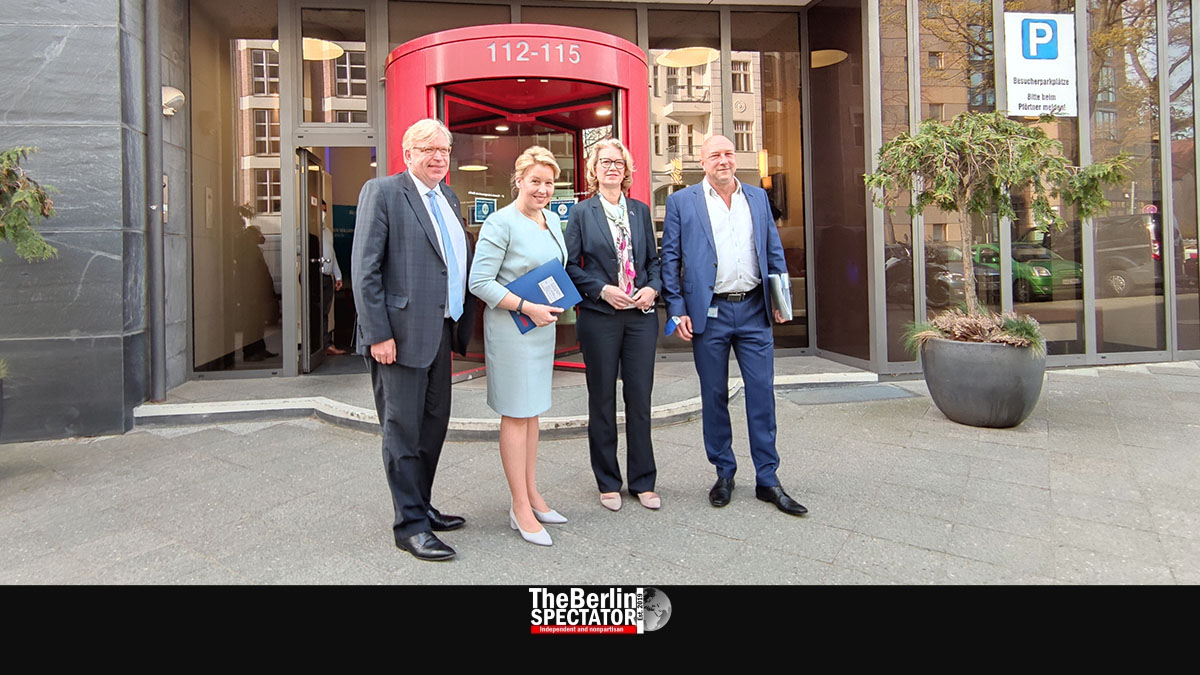 Since this morning, Berlin has a Security Operations Center (SOC). Its task is to identify cyber attacks and defend the city against them. Governing Mayor Franziska Giffey and reporters were given access to the most secret room in Berlin.

Berlin, April 13th, 2022 (The Berlin Spectator) — Russia’s war of aggression against Ukraine is taking place on the ground. But cyberspace is a war zone too, one of a different kind. “The war in Ukraine is not only being fought with weapons, but also on the Internet, far beyond Ukraine’s borders”, Berlin’s Governing Mayor Franziska Giffey said when she inaugurated the city state’s Security Operations Center (SOC) on Wednesday.

Berliners needed to be able to rely on the safety of their personal data which they shared with the authorities, she stated. Cyber attacks threatened democracy, especially in this situation, Mrs. Giffey warned. “With the Security Operations Center, we are taking another step in regard to the protection of the IT infrastructure of this city.” The Governing Mayor called the SOC “some kind of fire department”. She said there were 15 million cyber attacks and illegal access attempts against Berlin every year. Defense was existential.

“The number of threats posed by hacker attacks, malware programs and security breaches has increased for years”, Marc Böttcher, the chairman of the ITDZ Berlin, the institution which is now running the new SOC, stated. He said a lot of expertise and the latest technology were being bundled at the new center. According to him, cyber security needs to be managed actively and adjusted all the time.

Ralf Kleindiek, Berlin’s State Secretary for Modernization at the Administration, said information security was a prerequisite for the digitization the federal state was working on, and for online services Berliners could use. “The rest of Germany envies us for the new Security Operations Center”, Kleindiek stated. He said the SOC had modern methods and qualified personnel.

Franziska Giffey, Ralf Kleindiek, their hosts and dozens of journalists were given access to the SOC’s new command center today. It was the most secret room in the city until everyone entered it this morning. Seven desks with two big screens each are ready for just as many cyber security experts. Two of them, and their superiors, were present when some 30 reporters stormed it. The room is hot as hell because of all the electric devices they use in there. Three kilometers (1.86 miles) of cables were laid for the command center.

On several screens fixed to one of the room’s walls, the number of cyber attacks and illegal access attempts registered in the past 24 hours is being displayed. The next screen shows the origins of cyber attacks. Yet another screen displays the attacks that hit Berlin, and shows which of the city’s districts is affected. Thanks to the people who work at this command center, at the SOC and at the ITDZ, and thanks to Berlin’s investments into cyber security, the city’s residents are a little safer now when they communicate with the authorities. The city’s critical infrastructure is safer too.