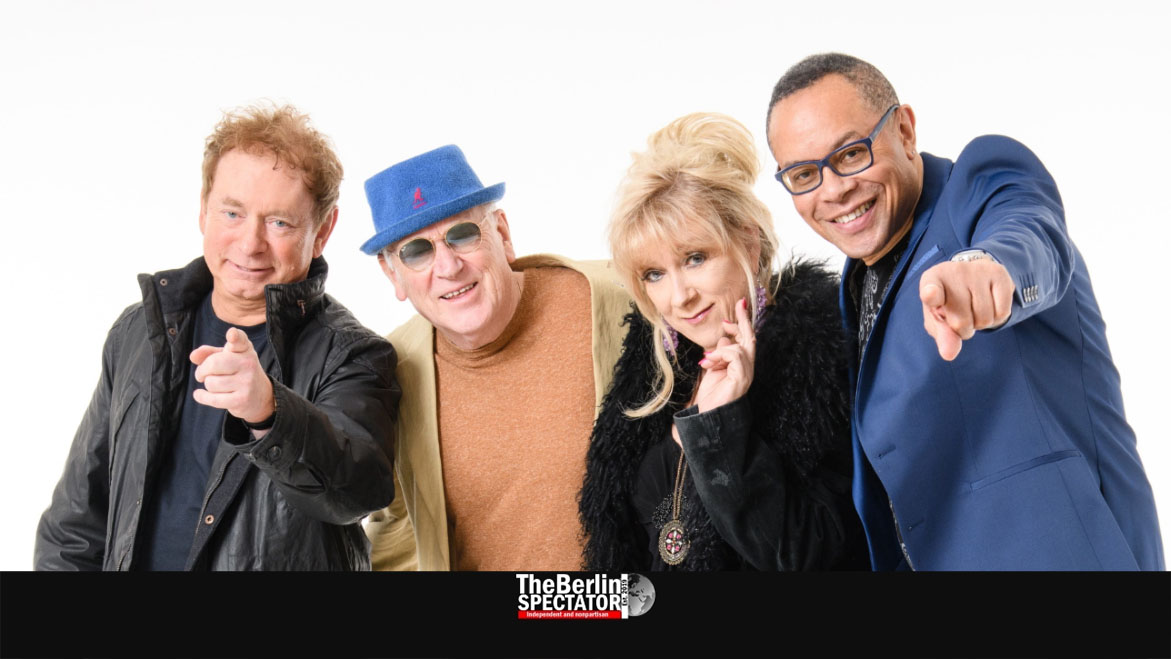 Shakatak are legendary. For decades, they have spread sophisticated Jazz-Funk. Fortunately, they are back on the road. Their tour had to be postponed a million times because of the pandemic.

Berlin, November 17th, 2020. Update: April 13th, 2022 (The Berlin Spectator) — In the late 1970s, British Jazz-Funk acts like Morrissey Mullen and Light of the World delivered some stunning sounds. The same applied to the latter band’s offshoot acts Beggar & Co. and Incognito, two groups that are still active today. This was long before The Brand New Heavies and The James Taylor Quartet were founded in 1985, and even longer before Jamiroquai entered the British Jazz-Funk arena in 1992.

Forty-two years ago, in 1980, pianist Bill Sharpe, drummer Roger Odell, slap bass hero George Anderson Junior, guitarist Keith Winter, the vocalist and percussionist Jill Saward and others extended the existing British Jazz-Funk community by founding Shakatak. Except for Keith Winter, who had to drop out for health reasons, all of the members mentioned are still in the band today.

While Beggar & Co. and Incognito hit the stages with huge brass sections, Shakatak was more restrained. They delivered genteel, unobtrusive Jazz-Funk. Their sound was different. It appealed to the Pop crowd more than the other acts mentioned, due to their Pop-compatible vocals. But Shakatak did deliver the Funk too, and still does.

George Anderson’s killer slap bass was always very prominent. In the 1980s, he often started their gigs with breathtaking 10-minute solos. Combined with Bill Sharpe’s brilliant keyboard and piano sounds, Roger Odell’s precise drumming and Jill Sawards percussion sounds, they developed their own Funk style. The guitarists they played with, including Keith Winter and Mezzoforte’s Friðrik Karlsson, added Rock and Fusion sounds. By doing so, they made Shakatak’s sound even more distinguishable, both in the studio and on stage.

One of those early Shakatak tunes which did not become a hit in the single charts, ‘Takin’ Off’, may be one of the most typical pieces of theirs. It stands for the sophistication of their compositions, for the energy they put into their sounds, for their typical backing vocals and the stunning slap bass sound they have been known for all along. ‘Takin’ Off’ includes it all, but so do many other Shakatak tunes.

Once they managed to hit the single charts, Shakatak released some very commercial songs such as ‘Down on the Street’. At the peak of their worldwide success they recorded ‘Day by Day’ with the late Al Jarreau. Even when those chart hits were history, they kept on going. In Japan, Shakatak have always had a huge fan base. They played those venues in Tokyo and Yokohama all the time, before Corona hit. And they have recorded several exclusive albums for Japan.

Today, Shakatak are as energetic as ever. George Anderson and Roger Odell are the Duracell bunnies in the band. They run their own projects on the side, including the George Anderson Band and Beatfik. And they are doing so in spite of the extensive tours Shakatak keep embarking on. Heathrow and Gatwick are like second homes to them. Brexshit does not exactly make those countless trips easier, does it? Neither does Corona, by the way.

The gifted Jill Saward is their main vocalist and percussionist. She recorded a stunning solo album as well. An interesting aspect is that none of the solo projects mentioned are far from Shakatak in regard to their style. During the Corona crisis, mastermind and keyboarder Bill Sharpe delivered excellent solo piano versions of Shakatak tunes via social media. But he also mesmerizes live audiences by playing ‘In Shadows’ on stage.

Time to get to the good news: Shakatak are finally coming to Germany soon. The invasion is going to happen later this month. Many witnesses are accusing the band of spreading sophisticated British Jazz-Funk all over the place. The verdict is ‘guilty as charged’.

Jülich, Bonn, Dortmund and Bad Salzuflen are on the touring plan in April of 2022. On May 1st, 2021, they will raise the roof at Berlin’s ‘Quasimodo’, just before they hit stages in Bremen and Hamburg. At this point, Stuttgart, Schwetzingen and Augsburg will still be ahead of them. Tickets for their German gigs can be purchased here.

By the way: Shakatak would not be Shakatak if they had not organized a loooong tour on their home turf as well. And they will be returning to Tokyo for some gigs.

Shakatak’s entire touring schedule can be accessed on their website.