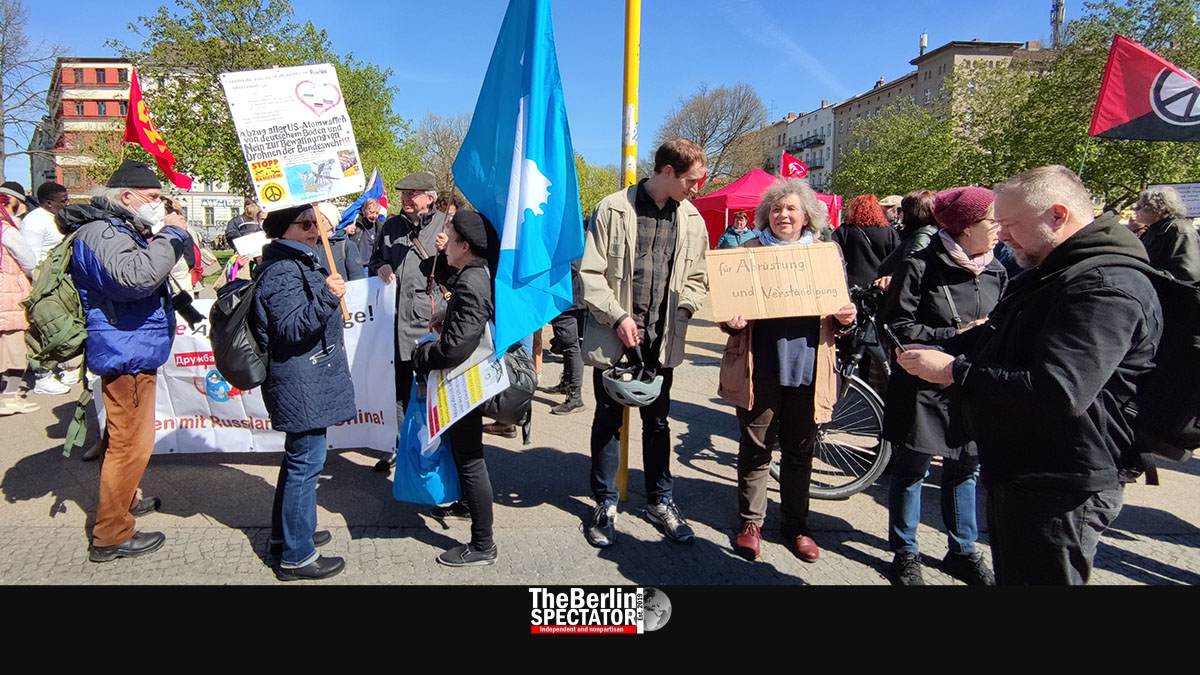 In the 1980s, West Germany’s peace movement demanded an end to the arms race between the Warsaw Pact and the West. Today, less than two months after Russia launched its attack against Ukraine, it protested against NATO. Is today’s peace movement misguided?

Berlin, April 16th, 2022 (The Berlin Spectator) — “The aggression by NATO and the E.U. provokes war in Ukraine”, it says on one of the flyers given out to protesters who took part in one of the Easter Marches in Berlin on Saturday. It was printed by a Marxist group. Other communist organizations, including the parties DKP and MLPD, were present as well, at Oranienplatz in the German capital’s Kreuzberg borough.

Most demonstrators here either did not know Russia is waging war against Ukraine or they did not want to know. They do not seem to understand Russian soldiers are murdering and raping Ukrainians, or they simply do not want to understand. In these circles, the answer to the question who is responsible is always the same: America, of course. And NATO. This was the dominating worldview at the protest in Kreuzberg today.

There was a tiny minority among the protesters through. Our reporter found two ladies who held signs that said Putin needed to be stopped and Russia’s military had to pull back and leave Ukraine now. Asked how they would end the war, other participants said Ukraine needed to give Russia the Donbas region. What happened to the ‘peace movement’ in Germany?

In the early 1980s, hundreds of thousands of its members protested against the deployment of the West’s Pershing II missiles. Many of them ignored the fact that Russia had hundreds of SS-20 missiles that were pointed at West Germany. Back then, the SPD’s Chancellor Helmut Schmidt was criticized by the movement, and by many in his own party, for supporting NATO’s Double-Track Decision, which included the deployment of more missiles as a reaction to the Soviet Union’s missile deployments, and an offer for negotiations with Moscow.

Whether the peace movement was wrong four decades ago is still being discussed. But, what about today? To most Germans, it is crystal clear who is responsible for the war against Ukraine, namely the country that launched it and has came up with far-fatched justifications since. A peace movement that supports Russia, the aggressor, is misguided to the opinion of many.

Germany’s Vice Chancellor and Commerce Minister Robert Habeck called on the Easter March protesters to convey a clear message against Vladimir Putin’s war of aggression. It was clear which side needed to be supported, also with weapons, Habeck stated. Putin threatened freedom in Europe, the Green Minister said. “Defenseless civilians are being killed, prisoners of war executed, hospitals attacked with missiles”. Just watching was not an option. Most protesters in Kreuzberg did not seem to care about these aspects. Similar rallies took place in many other German cities too.

On Friday night, Chancellor Olaf Scholz announced Germany would provide more than 1 billion Euro (1.1 billion U.S. Dollars or 800,000 Pounds Sterling) to Ukraine. That way, the government in Kiev can purchase any weapons it wants. On top of this amount, 400,000 Euro (432,476 Dollars 331,145 Pounds) will be given to the European Peace Facility which buys weapons for Ukraine. Recently, Scholz announced Germany would invest 100 billion Euro (112.7 billion U.S. Dollars or 84 billion Pounds Sterling) into its own defense. Many protesters at the Easter March in Berlin criticized this step. They said more weapons would prolong the war.