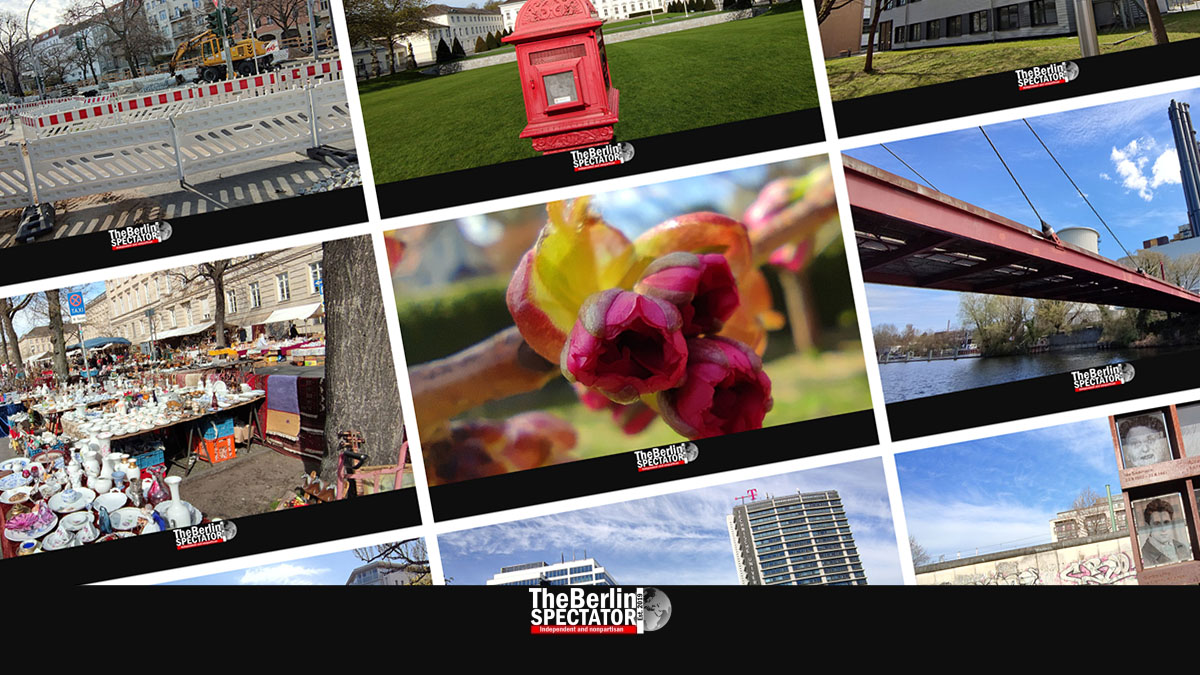 Since I wanted to see those Sakura flowers, I cycled all the way from Prenzlauer Berg to Lichterfelde. When I finally got there, the cherry blossoms were not in bloom. It took me a while to find the answer to the question whether I had gone there late or too soon. Hey, at least I got to see more of Berlin on the way.

Berlin, April 18th, 2022 (The Berlin Spectator) — It was Easter Sunday and I felt the inner urge to move. So I picked the obvious destination, namely the ‘TV Asahi Cherry Blossom Alley’. It is located in Teltow, Brandenburg, right behind Berlin’s Lichterfelde borough. The alley was named after the Japanese TV station Asahi which collected donations and used them to have hundreds of cherry trees planted there, between 1990, just after Germany’s reunification, and 2010.

So, I hopped on my bicycle and got going. The starting point was the northeastern part of Prenzlauer Berg. Usually, the intersection of Pappelallee, Schönhauser Allee, Danziger Strasse and Eberswalder Strasse ist a big mess. Not on Easter Sunday at 10:00 a.m., when everyone was either asleep or busy slurping hot chocolate. Hardly anyone was there.

Since I wanted to make some headway, I pedaled like crazy. At the Berlin Wall Memorial at Bernauer Strasse, I was reminded of the fact that this city has been united and free for 32 years only and that freedom is not self-evident and needs to be defended. Many died trying to reach the free and democratic West Germany.

Do you have any idea how many constructions sites I saw along the way? Neither do I. Do we Berliners actually live on a giant construction site? In a way we do. But things were a lot worse in the 1990s, I guess. Instead of thinking about construction sites too much, I concentrated on increasing my speed.

Those cherry blossoms were still very far away when I passed Bellevue Palace, which accommodates Federal President Frank-Walter Steinmeier. At this point, I was starting to think this trip would tire me out. On the other hand, I was not climbing Everest. This was a bit of cycling only, right?

Urus in the Metropolis

At Ernst Reuter Platz, I shot the fountains and the Technical University because I somehow like the look of this square. After about one minute, I was moving again since I still had to kill many kilometers in order to see those cherry blossoms.

At the next corner, I found a car dealership called Area Cars. How about a Lamborghini Urus with 650 HP for 404,900 Euro (436,952 U.S. Dollars or 335,470 Pounds Sterling)? Orange, anyone? Lamborghini’s LM2 was one of the first SUVs ever, decades before everyone else built them, and the Urus is its successor. But this wasn’t my concern. I wanted cherry blossoms. So, I kept on going.

Lost on the Campus

In Wilmersdorf, I crossed the A100 city Autobahn. Still, I was nowhere near my cherry trees. At this point, I became aware of the fact that I would have to return home later, which would double the distance I was covering. Hell! Then I got lost and found myself on the campus.

In Dahlem, a rather posh part of the city, I was looking at all those beautiful gardens and big villas. “Is this even Berlin?”, I was asking myself. Here, the world was still alright. Soon, I reached the city limits and Teltow Canal. At some point, I saw the combined heat and power station in Lichtenberg. Now, my blossoms were only minutes away.

Then, my horse got thirsty. I wanted to give it some Diesel but could not locate the filler neck. I was so close to the cherries now and expected to shoot the most stunning photos ever, with my Chinese-made smart phone.

Then, finally, I reached the TV Asahi Cherry Avenue. The bad news was the fact that the blossoms were not in bloom. Two couples who were chilling out on a blanket they had placed under the cherry trees told me I was about a week late. Because I wasn’t entirely convinced, I asked more people. About 50 percent of them said I was late, the other half told me I was early.

Then, I found people who live right there, next to the cherry trees. They said I was early. An elderly lady stated she expected them to blossom “within a week or ten days”. Another local said it might happen in three to five days. Sound the cherry blossom alarm!

When I looked at the blossoms closely, I thought they seemed to be ready to pop. Yes, I was perfectly aware of the fact that I would have to do another 31 miles on the bike very soon.

Was I tired when I finally got home after a ride of 4 hours and 44 minutes during which I did 51 kilometers (31 miles)? Take a wild guess.

Dear readers: We need your help.
The Berlin Spectator delivers news and features about a wide range of topics from Germany. This includes local stories from Berlin, politics, culture, tourism and people. In the past two years, we covered the Corona situation in the Federal Republic a whole lot. Recently, we reported from Berlin Central Station intensively, when thousands of Ukrainian war refugees arrived there every day.
We do a lot. But copying and pasting news agency files in order to hide them behind paywalls and call them articles is a strategy we leave to others. This is not how we work. As opposed to others, we actually are in the country we are reporting about. We are based in its vibrant capital.
The Berlin Spectator is what we call “a publication with a personality“. Anyone can sound conventional. We do not.
We thank those who are already supporting us. Without you, we would have given up a while ago.
But we need more support since we will not get too far with some 200 Euro per month.
Would you consider supporting The Berlin Spectator? These are your options:
– You can send us a one-time donation via Paypal.
– You can support us on a monthly basis via Paypal.
– You can become our patron on Patreon (monthly donation).
– You can go to our donations page first, to check your options.
The Berlin Spectator is a good project. Help it by donating. Thank you so much.