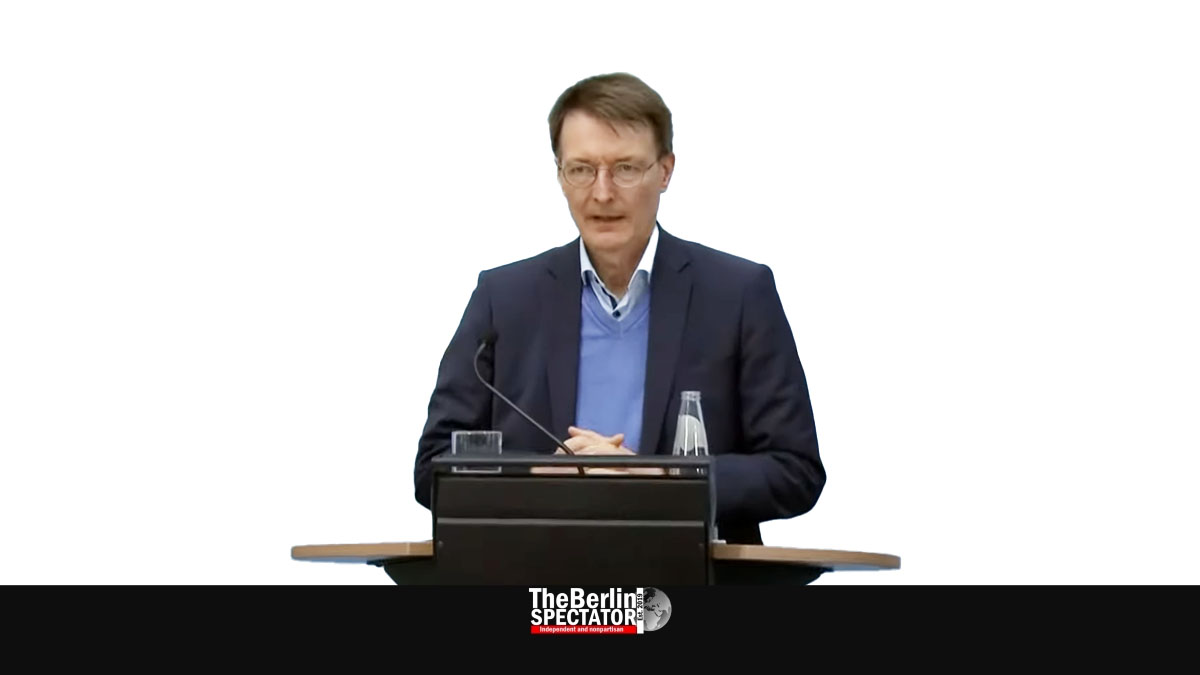 Germany’s Health Minister Karl Lauterbach believes the Corona situation will improve during the summer, but not as far as it did last summer. His prediction for the next fall does not sound good at all.

Berlin, April 22nd, 2022 (The Berlin Spectator) — Karl Lauterbach was invited to speak at the ongoing Ludwig Erhard Gipfel in Bavaria, a “summit for opinion leaders”. He did so via a video link. What he had to say was neither pleasant nor reassuring. At this time, no all-clear could be given, the Health Minister stated.

According to him, a seasonal improvement will be felt during the summer, but not like last year, when Germany had almost been “Corona-free”. Lauterbach’s prediction for the fall of this year is far less optimistic. He believes there might be Corona variants that cannot be stopped by vaccinations, just like Omicron, and that enter the lung tissue like the Delta mutation. In the United States of America, a more contagious Omicron subvariant had already been identified, he said.

In Germany, the messenger seems to be to blame. Earlier this week, Karl Lauterbach was criticized for warning the nation of a “killer variant” of the Coronavirus. “They pay me to state the truth”, he told the participants of the summit. He said his task was to come up with predictions without exaggerating or being overly optimistic. Germany needed to be able to prepare itself well, the Minister said.

Lauterbach also said he believed Germany’s actual Corona infection numbers might be twice as high as the official ones right now. At this stage, mostly persons with symptoms are being tested for COVID-19. The number of Corona-related deaths might be higher as well, the Health Minister believes. He said many patients with other diseases, including heart attacks, probably would not have died without Corona.

According to the Robert Koch Institute (RKI), the total number of Coronavirus infections since the pandemic began in early 2020 now exceeds 24 million. Since yesterday, 161,718 new cases were registered and 289 Corona patients died. Germany’s Seven Day Incidence increased to 733.4. On Tuesday, it had been 669.9. Because of the Easter holidays, less cases were reported in the past seven days.

Look at the States

Berlin is the federal state with the lowest Incidence. Since yesterday, it decreased further, to 344.0. In Brandenburg, Saxony and Thuringia, the Incidences are relatively low, from today’s perspective. With levels in the 400s and 500s, they would have been regarded as extremely high half a year ago. Bremen, Lower Saxony, Saarland and Schleswig-Holstein have the highest Incidences in Germany right now. They are in the 900s.

Dear readers: We need your help.
The Berlin Spectator delivers news and features about a wide range of topics from Germany. This includes local stories from Berlin, politics, culture, tourism and people. In the past two years, we covered the Corona situation in the Federal Republic a whole lot. Recently, we reported from Berlin Central Station intensively, when thousands of Ukrainian war refugees arrived there every day.
We do a lot. But copying and pasting news agency files in order to hide them behind paywalls and call them articles is a strategy we leave to others. This is not how we work. As opposed to others, we actually are in the country we are reporting about. We are based in its vibrant capital.
The Berlin Spectator is what we call “a publication with a personality“. Anyone can sound conventional. We do not.
We thank those who are already supporting us. Without you, we would have given up a while ago. We appreciate your help a lot. You know who you are.
But this publication needs more support. At this stage, we are getting a low three-digit amount per month.
Would you consider supporting The Berlin Spectator? These are your options:
– You can send us a one-time donation via Paypal.
– You can support us on a monthly basis via Paypal.
– You can become our patron on Patreon (monthly donation).
– You can go to our donations page first, to check your options.
The Berlin Spectator is a good project. Help it by donating. Thank you so much.