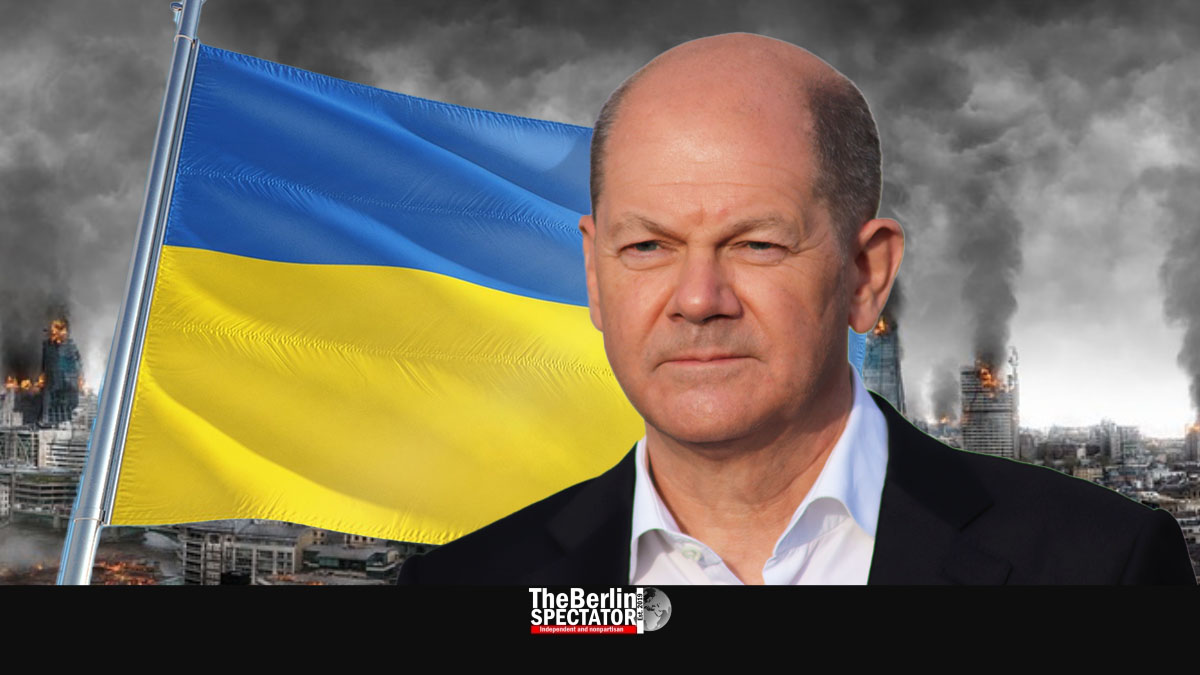 Chancellor Scholz is being criticized from all sides for not delivering heavy weapons to Ukraine, even though Germany is helping the country in many ways. The critics do not seem to consider the enormous risk either.

Berlin, April 23rd, 2022 (The Berlin Spectator) — Olaf Scholz is under pressure. The conservative opposition wants him to send heavy weapons to Ukraine. So do MPs for parties that are part of his government coalition, namely the FDP and the Greens. Ukraine’s Ambassador to Germany keeps on slamming the German government, and especially Scholz, for not providing heavy weapons.

Since Russia attacked Ukraine on February 24th, since the war of aggression has been going on, Germany has changed its policy. The diplomacy approach failed, and the Federal Republic’s assumption Vladimir Putin would remain tame and gentle as long as economic projects like North Stream 2 existed turned out to be wrong. Berlin has conceded mistakes and adjusted its policy.

Even before Moscow launched its war, Germany was Ukraine’s biggest supporter. Since February 24th, the country changed course. First, Berlin was ridiculed for sending helmets only. Then, Chancellor Scholz announced weapons would be sent. Last week, he even promised the Ukrainian government 1.5 billion Euro (1.62 billion U.S. Dollars or 1.27 billion Pounds Sterling) for any weapons it wanted.

While helping Ukraine, the Scholz government is trying to make sure it does not become a war party, in order to avoid possible consequences that are too terrible to even mention. It is a thin red line, also because the aggressor, Russia, could accuse Germany of entering the war at any moment, because of the military help it is providing. A further escalation of the war cannot be ruled out. With every step towards more military help, this risk increases.

In spite of all of this, Olaf Scholz is still being slammed for being indecisive or for not helping. The latter accusation is obviously wrong. But, what about those heavy weapons? According to the German government, the Bundeswehr, Germany’s armed forces, cannot give away more of its own heavy weapons, because, if it did, it would not be able to protect its own country or other NATO countries anymore. A multilateral weapons exchange which involves Slovenia is being prepared.

Now, the Chancellor explained his approach in an interview with the ‘Spiegel’ magazine. His highest priority was to prevent the war from spreading to NATO. “There must not be a nuclear war”, Scholz told the publication. “I am doing everything I can to avoid an escalation that could lead to World War III.” He stated this was why he had rejected the implementation of a no-fly zone in Ukraine from the start. But he did promise Ukraine heavy weapons. Will this statement reassure the critics? Probably not.

Not all of the support Germany provides has to do with weapons. According to the United Nations, more than 5 million people have fled Ukraine. Most war refugees are in neighboring Poland. So far, Germany has registered almost 370,000 Ukrainian refugees on its turf. They are being accommodated, they can register, get work permissions and apply for social welfare. In March, some 10,000 war refugees arrived in Germany every day. By now, this number has decreased to 2,500 to 3,500.