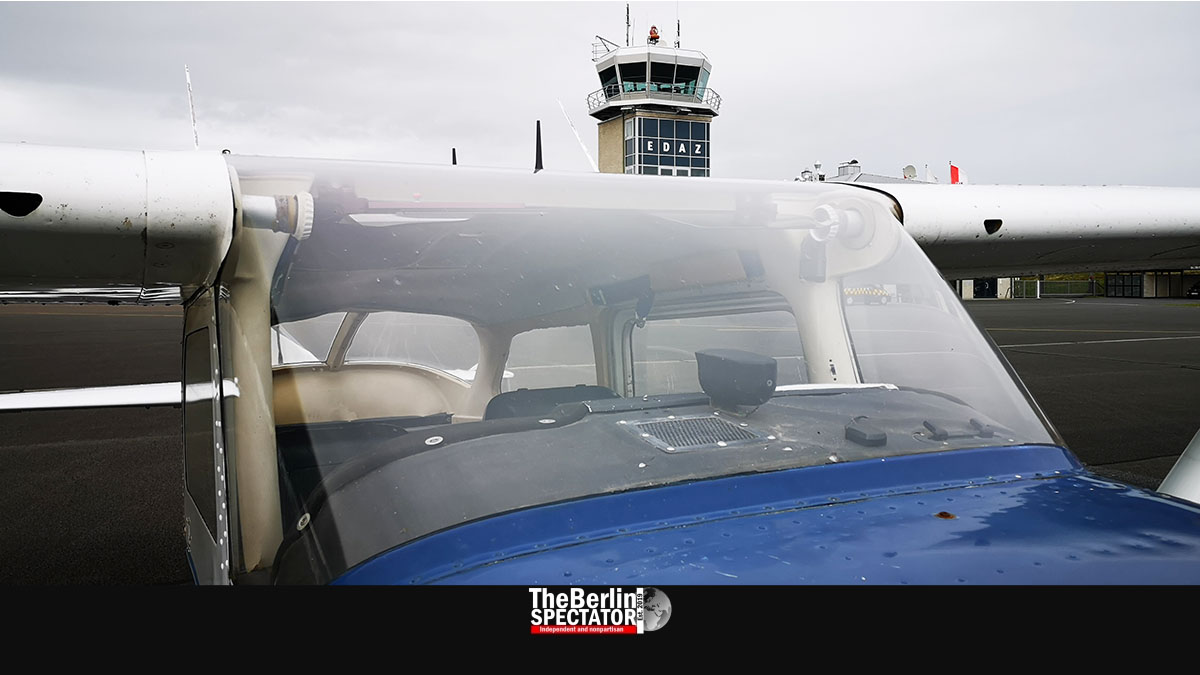 Welcome to Schönhagen Airport. Here, at this spot in Brandenburg, the world is still perfect. This is where Cessnas graze on pastures peacefully, and where pilots are still pilots.

Berlin, September 9th, 2020, updated April 24th, 2022 (The Berlin Spectator) — To those who have to find Schönhagen Airport from above, it is an advantage to know its coordinates. They are 52° 12′ 14″ N, 13° 9′ 36″ O. Getting there on four wheels is a little more complicated, at least from Berlin. The drive takes about as long as a flight from Schönhagen to Cologne.

Recently, Mark Wahlberg hit the site with a rather big entourage. A gazillion trailers were setup in advance, and a giant wooden platform was built for some shots. They put in quite an effort, considering only two short scenes for the motion picture ‘Uncharted’ were filmed at the airfield in Schönhagen, a village in Brandenburg province.

Compared to BER, the region’s new giant airport which was opened In October of 2020, Schönhagen is tiny. But it is a full-blown airport. According to its Managing Director Klaus-Jürgen Schwahn, a likable engineer and pilot from former West Berlin, even a big Boeing or Airbus could land here. The only problem: A large aircraft of this kind would not be able to lift off again because the two runways are too short. It would have to be disassembled, loaded onto several huge trucks, and put back together at BER Airport, 48 kilometers (30 miles) down the road.

Schönhagen may be a lot smaller than BER, but it does not have their problems. There is no need to invest hundreds of millions of Euro, there is no nine-year construction delay, there are no scandals and things are far more quiet.

The big airports in the Berlin Brandenburg metropolitan area, two of which ceased to exist one and a half years ago, were affected by Corona a lot. At some point, the number of passenger flights slumped by as much as 99 percent. Far more Chinese-made masks arrived in freighter planes at Tegel Airport than passengers. In Schönhagen, on the other hand, things just continued normally. During the ongoing pandemic, there were times when they had even more traffic than the big airports because most airline flights were grounded.

Schönhagen Airfield has been in service for more than 90 years. In the late 1920s, the neighboring hills had been used to get gliders up in the air, Klaus-Jürgen Schwahn says. Later, in fascist Nazi Germany, an airport was prepared at today’s location. The first aircraft took off in 1934. After WWII, in 1946, the Allies decided to destroy the airfield, also because there was a flying ban for Germans. The planes on site were burned.

Starting in 1950, Germans were allowed to use gliders again. By 1955, they had the right to fly motorized aircraft. A flying school was set up in Schönhagen. It was used by the former GDR. “Anyone in East Germany who wanted to fly for the NVA (the GDR’s armed forces) or in civilian aviation, came here”, Schwahn says.

He explains that, after Germany’s reunification, his airport was the first one to be used by former West Berlin’s hobby pilots. During the Cold War, they had been forced to go to airfields near the West German cities of Braunschweig or Hof, because of the flight ban in Berlin. From 1990, everything changed, and Schönhagen is a lot closer than what used to be West Germany.

In 2002, when Klaus-Jürgen Schwahn came in after flying for Eurowings and running a private airline, Schönhagen was not that large. Since, he has extended it in all ways possible. Aviation is not everything here. Schwahn and his staff had to go through all of the bureaucracy Germany is known for when they wanted to extend it. Then, they added buildings and accommodated companies. By now, there are 41 of the latter.

“We do everything those large airports don’t”, Dr. Schwahn states. He explains that sixty percent of the air traffic is commercial in the sense that companies that are active in Berlin have business jets that take their managers to Berlin and back to their HQs in other parts of Germany. Of course there are private pilots as well. They come to Schönhagen to take their steel bird up into the skies for pleasure.

In Germany, 75 percent of all air traffic is not connected to the large airlines with their big Airbuses and Boeings. Small planes do most of the flying in this country. One of the private pilots who lands in Schönhagen on a regular basis is Friedrich Merz, the new chairman of the conservative Christian-Democratic Union (CDU).

Ambulance aircraft use Schönhagen Airport as well. Berlin’s two ambulance helicopters and the Federal Police fly in on a regular basis, but only to suck kerosene or for repairs at the local helicopter service location. By now, 80 percent of Schönhagen Airport’s revenue has little to do with flights, but more with service.

When Hollywood superstars and their people show up, as they do on a regular basis, revenue is being generated. Every month, the owners of all 180 aircraft on site pay rent. Even room for conferences is being offered by Schönhagen Airport. Here, the sky is obviously the limit, also business-wise.

But those sleek business jets are truly impressive. There are pretty elegant planes with up to eight seats that are being propelled by single turbo prop engines. Everyone around here knows the exact model names of every single aircraft in the rather big hangars. At the tower, an employee is busy working the radio and talking to pilots. He has the best view in the house.

Forget BER. Schönhagen is far more overseeable, cozy and authentic. This is the place for true aviators, located in the middle of nowhere in beautiful Brandenburg. Our reporter would not even have found Schönhagen Airport if the street that connects it to the village was not called ‘Zum Flughafen’ (‘To the Airport’).