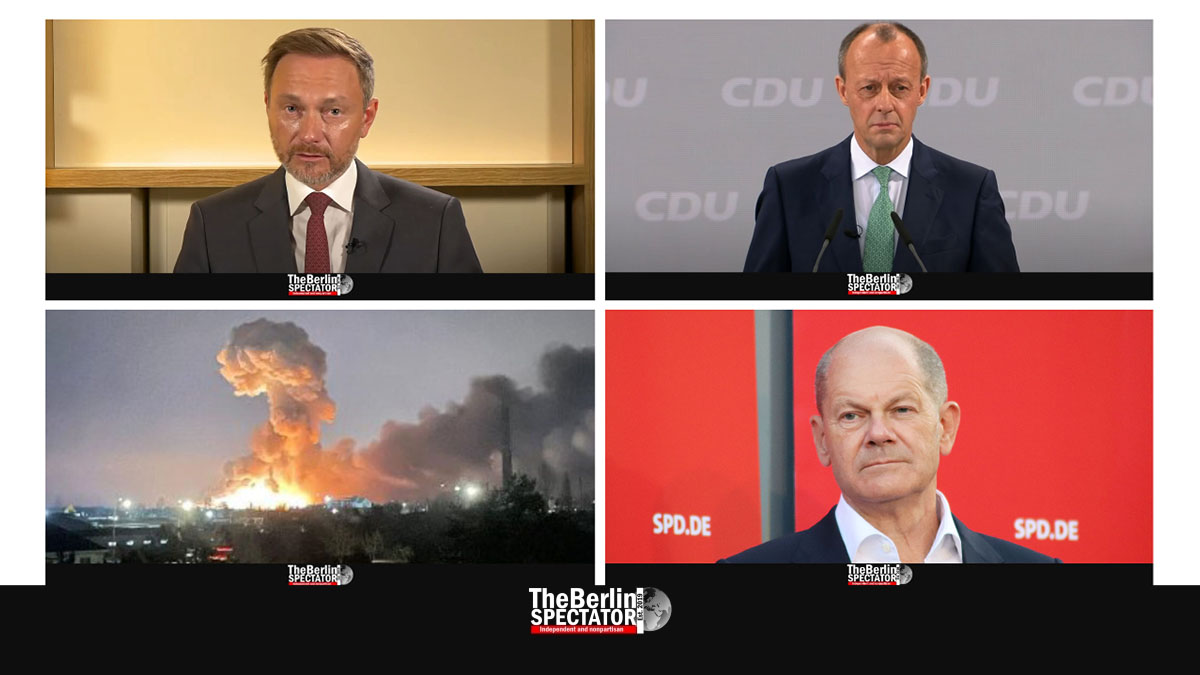 In Berlin, not a day goes by without verbal attacks against Chancellor Scholz in regard to his approach on Ukraine. In some cases, one short statement by a party chairman can make the criticism disappear into thin air. Besides, the major parties at the Berlin Bundestag are on the same page anyway.

Berlin, April 24th, 2022 (The Berlin Spectator) — The Free Democrats (FDP) are one of Chancellor Olaf Scholz’ two junior coalition partners. Still, several members have constantly criticized him harshly in the past days and weeks, saying he was hesitant on Ukraine. Wolfgang Kubicki, one of the party’s vice chairpersons, said there were those who believed there was a lack of willingness to lead. This was only one of many attacks against Olaf Scholz.

Marie-Agnes Strack-Zimmermann, one of Kubicki’s party colleagues who recently visited Ukraine, made clear she believed a procrastinator lived in the chancellery. She has demanded weapons for Ukraine on a daily basis, even though this is exactly what the government is working on. Bijan Djir-Sarai, the FDP’s new party secretary, said Ukraine needed to provide all the help it needed. Time was of essence here.

It took only a moment until all the direct and indirect criticism expressed by FDP members was annulled. Christian Lindner, the party’s chairman and floor leader at the Bundestag, who is stuck in Washington D.C. right now because of a Corona infection, appeared at his party’s convention on Saturday via a video link. He defended Scholz by saying he had the FDP’s trust. Criticizing the Chancellor generally was not what the FDP stood for. Lindner also said the situation required “responsible and serious decisions”.

At the same time, Lindner slammed the conservative Christan Democrats (CDU) by accusing them of “party political floor exercises” that were inappropriate in times of war. The CDU’s new chairman Friedrich Merz had criticized Olaf Scholz of “covering up and concealing” things and of “grave failures”. The German foreign and defense policies of the past twenty years needed to be looked into, Merz just told the ‘Bild am Sonntag’ weekly. During most of this time, his own party colleagues were Ministers of Defence while Angela Merkel, another CDU member and former party chairperson, was in office.

Merz also stated massive sanctions against Russia had been required since 2014, when Russia had invaded Crimea. Now, Germany was increasingly isolated. Russia’s President Vladimir Putin would continue on and on if he was not stopped. “Especially the refusal to provide heavy weapons makes an expansion and escalation of this war more probable”, Friedrich Merz stated in the ‘Bild am Sonntag’ interview. He also said the CDU fraction at the Bundestag would vote against Scholz’ 100 billion Euro investment into Germany’s defense if he did not talk to the CDU. Just weeks before, Merz had announced he would not use Russia’s war of aggression against Ukraine for party politics.

The federal government in Berlin has already sent weapons to Ukraine. Besides, it is providing 1.5 billion Euro (1.62 billion U.S. Dollars or 1.27 billion Pounds Sterling) for any weapons Ukraine wants. A multilateral exchange which involves Slovenia is in the works. Ukraine is supposed to get Russian-built tanks from Slovenia’s army quickly, while Germany provides replacement. All major players, including Olaf Scholz, want to provide Ukraine with the weapons it needs, and the government is working on it. Many believe the alleged differences are overinflated.

Berlin and Brandenburg: Kids Return to School Without Masks