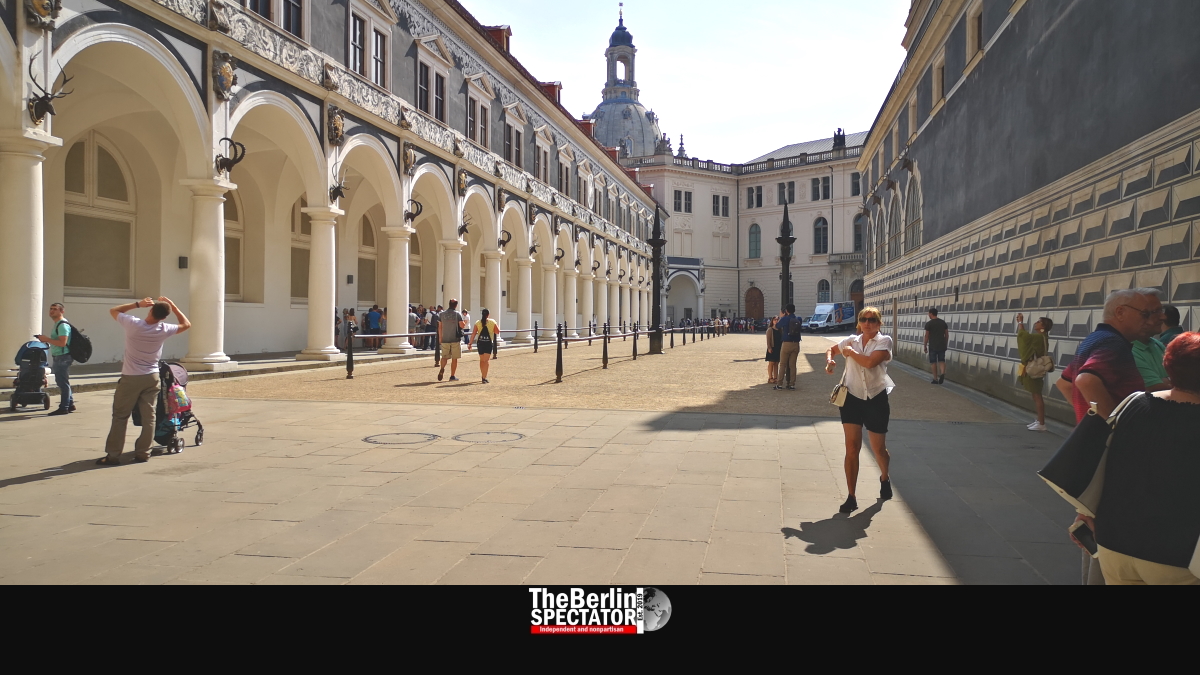 In Dresden, tourists from all over the world find what they are looking for. The city’s old town is simply stunning. Visitors who invade the city every day stare at all the beauty in disbelief.

Berlin, August 22nd, 2019. Update: April 24th, 2022 (The Berlin Spectator) — Tourist guide seems to be a very popular profession in Dresden. At every corner in the city center, at least one guide is busy with his or her monologue about the millions of sightseeing attractions available here. It almost seems like there are more tourist guides than people with conventional professions.

On this day, just before the Corona crisis, two ladies in their fifties explain things to British and American visitors in excellent Oxford English. They just made it to the most fascinating spot of them all, Frauenkirche, which used to be a pile of rubble after the war, until it was rebuilt in post-reunification times.

Three German-speaking tourist groups are on the move as well. One of the young guides sounds very intellectual. Maybe he just came out of one of the many colleges here. A lady explains things to a rather large Japanese group at the Procession of Princes. Most members of her herd are pointing their iPhone cameras at that truly fascinating mural.

As beautiful and historic the center of Dresden might be, it also was a mess, until recently. That is because a gazillion construction sites were spread all over the place, including in the historic Old Town. The provincial government is building like crazy. In 2019, the construction activities messed up part of Schlossplatz, the Augustus Bridge, the Terrassenufer which is the street along the Elbe river, and they produced two cavities in Old Town Dresden which were as big as several football fields.

Recently, a wooden construction site fence around the famous Semper Opera House used to spoil all of those photos, about 30 per minute, taken by tourists who walk in its direction. By now, at least this renovation has been completed. Tourists can actually see the impressive Opera House.

The countless tourists in Dresden need to be fed. This is where the city’s huge restaurant business comes in. For its 550,000 inhabitants, many of whom live in huge apartment blocks constructed in communist times, in the outskirts, Dresden does not need this many elegant restaurants in the very center. But sightseeing definitely makes tourists hungry.

At one of those many food spots, located on the ground level of a perfectly renovated medieval building, the chicken Schnitzel with mashed potatoes is not only delicious, but also looks attractive. The design of the meal on the plate makes it too beautiful to eat. Having Apfelsaftschorle, a very refreshing mix of apple juice and club soda (known as sparkling water in the U.K.), is compulsory in Germany.

In Dresden, there are so many important sightseeing spots, it is hard to find a good starting point. The Procession of Princes mural is 101 meters long and tells the story of a mounted procession of the rulers of the House of Wettin. The Pfunds Dairy was established in 1880. It is the most beautiful dairy shop in the world.

Inaugurated in 1841, the Semper Opera House is one of the buildings that were destroyed by the Allies’ bombings in 1945. Later, it was restored. The Royal Palace, constructed in the 15th century, was destroyed and rebuilt as well. Another fascinating building to check out is the Sanctissimae Trinitatis Cathedral, a baroque style chapel built from 1738 to 1754.

It does not end there. The beautiful Zwinger Palace, Brühl’s Terrace, the Golden Horseman and especially the Frauenkirche are places which need to be visited and admired. Martin Luther has the best spot in the city. His black statue in front of the enormous church is the perfect photo object.

The Frauenkirche, this enormous house of worship, was constructed from 1726 to 1743. Historians believe the chapel had a predecessor which must have been built shortly after the year 1000. It was probably a wooden construction. In the 12th century, a small church was erected on the premises covered by the church today. Archaeologists found pieces of the building’s walls.

Before World War II, parts of the Frauenkirche needed to be renovated all the time, since the material used for some walls and pillars which carried the bigger part of the weight of its gigantic dome had been of bad quality. Constantly, issues arose. Metal bars and other supporting elements needed to be built into the walls.

In the fall of 1944, the Allies were fighting Nazi Germany, and only months away from finally defeating fascism. In early 1945, from February 13th to 15th, the U.S. Air Force and the Royal Air Force flew attacks in four waves during which countless bombs were dropped on Dresden. Up to 25,000 residents died during those raids.

Historians are still discussing the question whether those bombardments were really necessary in order to defeat Nazi Germany. This argument is rather complicated, since the Allies took so many losses and saved so many lives by ending the Nazi terror, and by liberating Germany’s death camps as well as the entire continent.

The Frauenkirche was destroyed during those bombings. On the morning of February 15th, 1945, the huge fire storm caused by all the bombs had weakened the pillars of the church. At 10 a.m. they gave in and the dome collapsed. From this moment onward, the huge temple was a pile of rubble.

The GDR (communist Germany) checked whether a reconstruction was feasible. After a while, the regime in East Berlin came to the conclusion that a project of that kind was far too big and expensive. It had roses planted on top of the rubble and declared it a memorial.

After the reunification of Germany, the Lutheran Church started thinking about a reconstruction again. An association was founded for this purpose. On March 18th 1991, the Synod of Saxony decided to rebuild the Frauenkirche. From 1996 to 2005, the enormous endeavor was implemented. It cost 180 million Euro (160 million GBP or 212 million U.S. Dollars). A big chunk of that sum was collected from donors all over the world.

The reconstruction itself was more than complicated. First, every single stone on that pile needed to be identified, registered and numbered in a catalog. The parts also needed to be prepared and missing parts had to be made while architects tried to figure out how to make sure the new version of the temple would be stable.

The incredible history of the Frauenkirche and the reconstructed building alone justifies a visit to Dresden. So does the beauty of the city’s entire old town. While the main shopping zone is ugly as hell, since most of the buildings there were constructed in former East Germany during the 1960s and 70s, many parts are fascinating, including the Blue Wonder, a bridge across the Elbe inaugurated in 1893.

Dresden’s geographical location also makes it a good starting point for a nice little trip to Prague. The distance from Dresden to Berlin is only about 180 kilometers. Before you leave Dresden, do not forget to consume that Schnitzel and the Apfelschorle.

Note: There is a Dresden article in German too. You can access it here.