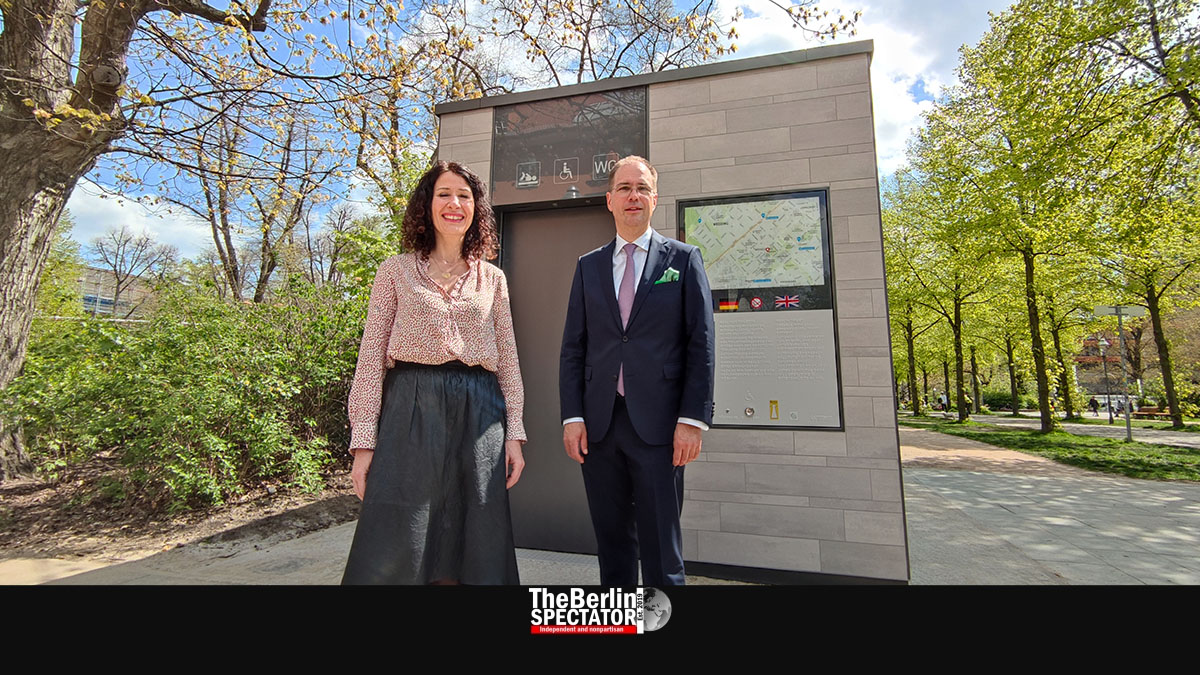 Apparently, Berlin has “the most modern public toilet infrastructure in Germany”. They are all over the city. So, you’re a tourist and need a toilet immediately? No problem. There even is a public toilet app.

Berlin, April 27th, 2022 (The Berlin Spectator) — On behalf of the Berlin’s Senate Administration for the Environment, yet another public toilet was just installed. It is located next to Zeppelinplatz, a square with a little park in the city’s Wedding district. ‘Wall GmbH’, a company that builds bus shelters and structures for advertising posters as well, set up the toilet cabin. For the company, its manager Patrick Möller joined Senator Bettina Jarasch at a tiny inauguration event.

So, what makes this particular toilet so important? It is the last one. In the past three years, a total of 278 of them were installed all over Berlin. ‘Wall GmbH’ even managed to do so on time, according to the contract it signed with the Senate. This completes the endeavor. In total, there are now 418 public toilets in Berlin, or one toilet per 90,909 inhabitants.

The new ‘Wall’ toilets are modern in several ways. They do not use that much energy, meaning the city will not have to build a nuclear power plant next to each of them. Also they partially clean themselves and provide a lot of room. Some of the city toilets in Berlin even have diaper changing tables. The ‘last toilet’ in Wedding consists of a regular toilet and two pissoirs that can be entered separately and used free of charge.

“This is a big infrastructure project”, Bettina Jarasch said. According to her, the first toilets that were installed in Berlin were “comfort stations, for men only”. The new ones, on the other hand, were developed for everyone, including seniors, parents and handicapped persons. All of the 278 city toilets installed by ‘Wall’ are barrier-free. They provide enough space for wheelchair users too.

It gets better. Berlin even has a toilet app for both Apple products and Android gadgets. No, it does not tell people how urgently they need to go to the bathroom or what exactly they should do there, but how to get there and whether the city toilet they are approaching is vacant or occupied.

Bettina Jarasch said the first part of the Corona pandemic had shown how important public toilets were. When all restaurants had been closed for months, people had still needed public toilets. Many restaurants do not let passers-by use their bathrooms anyway, especially in Berlin’s two city centers, because they are sick and tired of having people come in every ten seconds.

Using the ‘last toilet’ in Wedding, or any of the 278 ‘Wall’ toilets, costs 50 Euro Cents. We wait until it is our turn, we drop a coin in the slot, the doors opens automatically, we enter and we sit down on the toilet and do what we have to do. Sensors in those city toilets establish whether a person is inside or not. After 20 minutes, the door opens automatically if the person inside does not prolong his or her ‘appointment’ by the click of a button. This is a safety feature, in case someone faints or worse.

‘Wall’, the company that built the new city toilets will also clean them on a daily basis and make sure they are operational. This is good news for the many tourists who are now returning to Berlin, and Berliners who cannot make it home without going to the bathroom first.