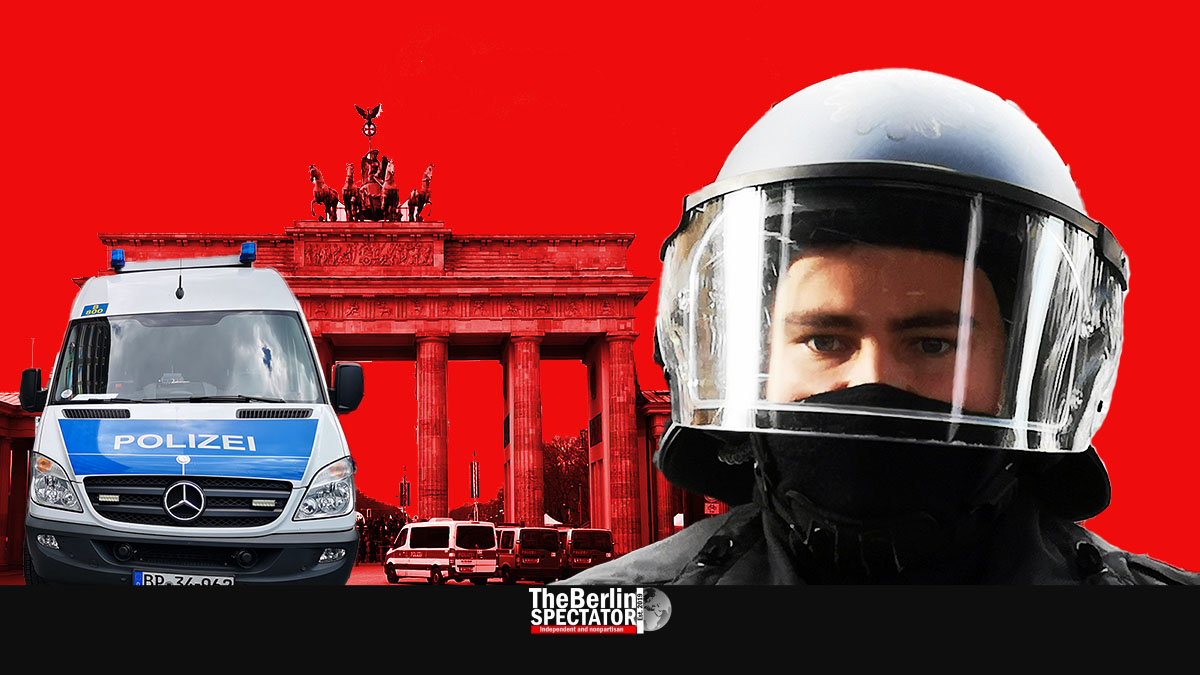 On Labor Day, the police in Berlin will have to deal with left-wing radicals who are willing to resort to violence in their fight against the things they hate, namely “the system”, the state and its police. Protecting the city will be quite a challenge, as always.

Berlin, April 28th, 2022 (The Berlin Spectator) — Blogs published by Germany’s extremist left are hard to digest. Here, authors who use the freedom they have to fight the state that gives it to them complain about “the system” and the police that protect the state and the rest of us against them. The police even protect the radicals from themselves, by limiting their opportunities to become violent on May 1st.

Note: The Berlin Spectator uses the labels ‘extremists’ or ‘radicals’ for persons, groups or parties that fight democracy, the state, its institutions, its police and/or its values, on both the far-right and the far-left.

Shortly before Labor Day, more and more invocations for participation in the ‘Revolutionary May 1st’ appear. “Let us declare war against the wars waged by the ones in power”, it says on a well-known radical website. “Let us take the streets together, yallah!” The use of the latter Arabic word is not a coincidence. It attracts like-minded groups from within Berlin’s large Arabic community.

The organizers are using legitimate concerns, such as rising food prices and rents, as well as calls against domestic violence as a justification for the ‘Revolutionary May 1st’, which is usually violent. “Years past have let us feel just how much resistance Berlin has to offer. We heard it sung in countless languages, and we saw it in many raised fists.” Raised fists against a free and democratic state that is helping its citizens with extensive social welfare programs and relief packages in times of crisis, a state that is welcoming hundreds of thousands of refugees from Ukraine as well as African and Asian countries.

Obviously, the police are Enemy number one. Every time, the participants of the ‘Revolutionary May 1st’ chant “All of Berlin hates the police!”. This lie is a cheap attempt to provoke the officers. But they are used to it. The Berlin Police Department has been following a strategy of de-escalation for years. The problem is that it does not help when there are too many radicals who are willing to fight street wars.

The radical blog accuses the police of having resorted to violence against the same protest in 2021. What the authors ‘forgot’ to say is that police were attacked just before the officers reacted, and that last year’s protest was stopped because too many demonstrators refused to adhere to the Corona rules. An entire page about an alleged “despicable behavior” on the part of the police shows what this protest is really about.

Berlin’s State Office for the Protection of the Constitution is expecting tens of thousands of participants at several May 1st protests most of which will be peaceful. The authority believes 5,000 to 20,000 people, including left-wing extremists, will take part in the ‘Revolutionary May 1st’ which is scheduled to begin at 6:00 p.m.. Some radicals are expected to take part in the traditional demonstration staged by the DGB, Germany’s umbrella organization of unions, too.

In the 1980s, the police used clubs and teargas first, while the thinking and talking was done later. By now, it is the other way around. The Berlin Police Department sends out communication teams in yellow vests. Also, they keep on reminding the participants to follow the rules and refrain from attacks in announcements. If that does not help, they try to pull violent protesters out of the crowds before the situation explodes. In 2021, fifty police officers were injured while they protected the city against a mob of violent left-wing extremists.

Berlin needs help. On May 1st, 5,000 officers will be spreading out on the streets of Berlin. Half of them will be part of the Berlin Police Department, while the other half is supposed to be covered by colleagues from other federal states as well as the Federal Police, according to Berlin’s Interior Senator Iris Spranger. The many peaceful protests will have to be accompanied and the traffic has to be blocked and rerouted. But the most difficult task is to prevent violence during the ‘Revolutionary May 1st’ march. Rapid reaction teams in police vans will be ready to go anywhere at a moment’s notice.

Senator Spranger said she hoped Labor Day would be peaceful. “We will see, because rallies of this kind on May 1st provide a platform for radicals and extremists too”, she stated. “A small part of the protesters will likely use the situation for throwing stones, pyrotechnical products and bottles.” But the police were prepared well, she vowed. They would rely on communication as long as the protesters were peaceful.

In the meantime, the radical left has a new enemy, namely Martin Hikel, the district Mayor in Berlin’s Neukölln district. He and his team organized several street fairs along the route the “revolutionaries” wanted to take. The protest is supposed to commence at Hertzbergplatz, a square next to Sonnenallee, a major street in Neukölln, and end at Oranienplatz, a square in neighboring Kreuzberg. The organizers of the ‘Revolutionary May 1st’ accused Hikel of curtailing the right to protest, with “street fairs that have no basis among the residents in the neighborhoods”. Well, neither do violent protests staged by radicals.