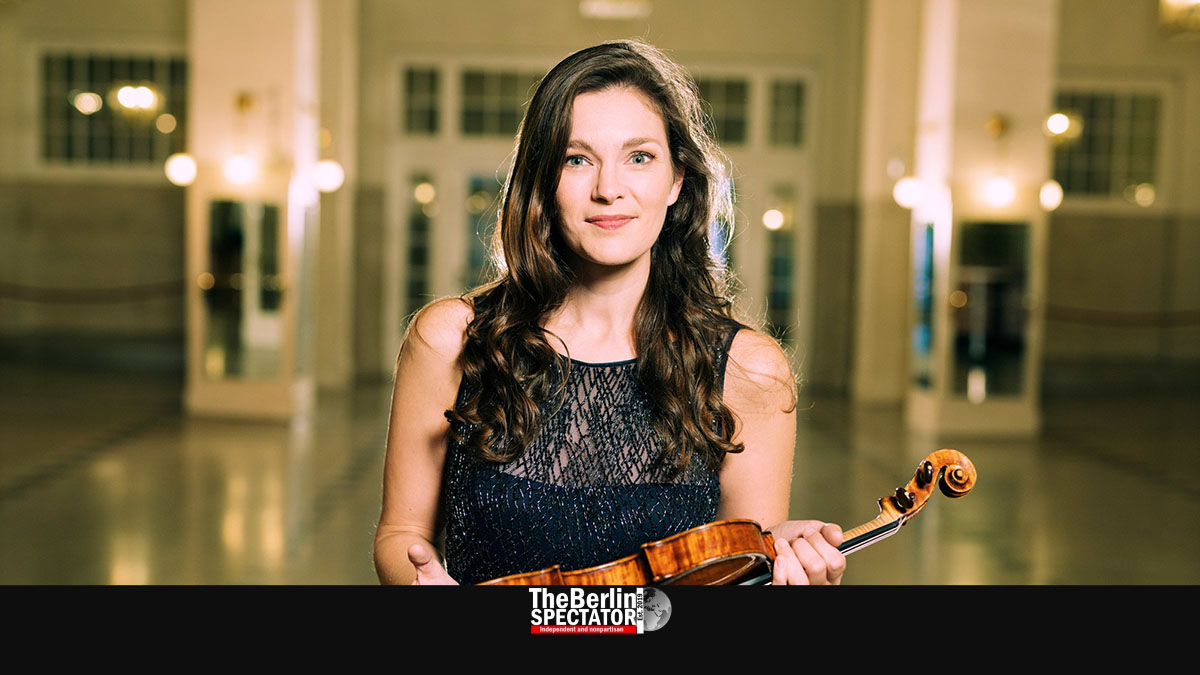 When you perform with the world’s greatest orchestras, when the Stradivaris you play have names, or when your own name appears in the title of a documentary, you are big. And when all these things happen at once, your name is Janine Jansen.

Berlin, April 28th, 2022 (The Berlin Spectator) — Is she playing the Stradivari or is the Stradivari playing her? It is probably both. Janine Jansen knows you should never hold this instrument in your hand without case, except when you are playing it. Otherwise it might be crushed in the sliding door of the van that takes you to the venue, it might get wet or cold.

The secret is to treat the Stradivari like a baby. One by the name of ‘Rivaz, Baron Gutmann’ is with her these days. This very special instrument is not for sale. It cannot be rented, tried or abused in any other way. You may play it if you wash and dry your hands first, if you refrain from dropping it and if your name is Janine Jansen.

“Violinist Janine Jansen is able to bring out the subtlest nuances of a work with focused, introspective playing”, it says on the Berliner Philharmoniker’s website. “This skill makes her ideally suited to the demands of Jean Sibelius’s Violin Concerto, with its delicate, clear-cut Nordic melodic lines.” True. Of course, the Berliners have more than one reason to publish accolades of this kind. First of all, the statements are accurate. Secondly, Janine Jansen will be performing with them in June.

The composition mentioned above is the one they picked. And they will play it three evenings in a row, on June 16th, 17th and 18th, 2022. There is one place in Berlin where they would stage concerts of this kind: at the Philharmonie. None other than Sakari Oramo, the chief conductor of the BBC Symphony Orchestra and the Royal Stockholm Philharmonic Orchestra, will be conducting this highlight. Yes, the Philharmoniker will play the 1st Symphony by the Danish composer Rued Langgaard too.

Last year, the documentary ‘Janine Jansen: Falling for Stradivari’ was released. It follows her “as she embarks on a once-in-a-lifetime opportunity to record a new album on twelve of the greatest violins to have ever been created”. The title of the album is ’12 Stradivari’. It is the tenth album she has released. On earlier ones, she interpreted the usual suspects four of whom start with a ‘B’, namely Bach, Bartók, Brahms, Beethoven, Mendelssohn, Prokofiev and Tchaikovsky.

In Janine Jansens family, everyone was or is a musician. This applied to her grandfather and her parents. Her brother plays the instrument she originally intended to go for, which is the cello. So does her husband. Listing the orchestras she has played with would make this article far too long. The same applies to the awards she was honored with.

Details about the upcoming three concerts in Berlin and the right link to the ticket shop can be found here.

Dear readers: We need your help. The Berlin Spectator delivers news and features about a wide range of topics from Germany. This includes local stories from Berlin and the rubrics politics, culture, tourism and people. In the past two years, we covered the Corona situation in the Federal Republic a whole lot. Recently, we reported from Berlin Central Station intensively, when thousands of Ukrainian war refugees arrived there every day.
We thank those who are already supporting us. Without you, we would have given up a while ago. We appreciate your help a lot. You know who you are.
But this publication needs more support. The support we are receiving needs to be increased substantially to give The Berlin Spectator more stability.
Would you consider supporting The Berlin Spectator? These are your options:
– You can send us a one-time donation via Paypal.
– You can support us on a monthly basis via Paypal.
– You can become our patron on Patreon (monthly donation).
– You can go to our donations page first, to check your options.
The Berlin Spectator is a good project. Help it by donating. Thank you so much.