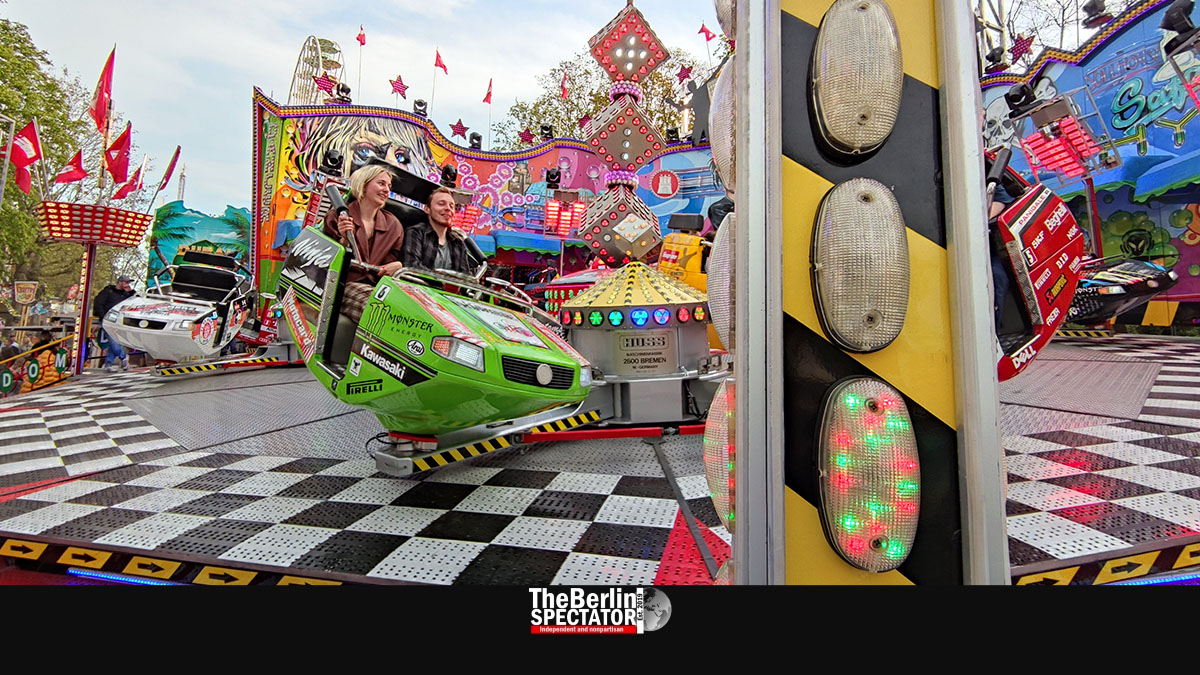 Berlin organizes funfairs several times a year. But only one of them is located at a park. Because the trees and other plants at ‘Hasenheide’ need to be protected, it is the last time.

Berlin, April 30th, 2022 (The Berlin Spectator) — Hasenheide is a giant park in Berlin’s Neukölln district. When the weather is nice, thousands of residents populate it. They fry themselves in the sun on one of the park’s many meadows, walk their cute doggies, let their four-legged friends play at the dog run and they take their kids to Hasenheide‘s tiny zoo. Young couples take romantic walks, hand in hand, older ones sit in the rose garden and enjoy the view. Unfortunately, drug dealers frequent the park as well.

A few days ago, one of the big meadows in Hasenheide was prepared for the ‘Maientage’. A thick layer of sand was spread all over the place in order to protect it. Then, about 100 fairground rides and food stands were set up there. It is the 55th time, meaning this has been going on since the mid-sixties. Because of Corona, the ‘May Days’ were cancelled in the past two years. Now, they are back, for the last time.

First of all, nobody will starve at this funfair at the park. Vegans have to look for their food for a long time because it is not being offered, but they do not seem to be the target group anyway. But there are loads of steaks, bratwürste, currywurst, French fries, candied almonds or apples, waffles, the obligatory cotton candy, ice cream and all of that. At the funfair’s own little beer garden, Neukölln’s District Mayor Martin Hikel was seen as he was discussing the situation with officers sent by the Public Office of Order on Friday evening.

A little shooting gallery is among the many attractions for visitors. So are a giant wheel, bumper cars for adults and kids, rollercoasters, kid’s carrousels, crazy houses, a tunnel of horror, raffle ticket booths and a mirror labyrinth. At Freefall Extreme, people can experience the effects of gravity in their digestive tracts. The best thing of them all is the funky music they play through giant loudspeakers at some of those crazy carrousels for teenagers and adults. Oh yes, there is a lot of action.

The event will last until May 22nd or May 30th, depending on the source. Nobody knows whether the ‘May Days’ will find a new home. One of the options is Tempelhof Airfield, a former airport which provides a lot of room. Since it is located next door, it might be a good alternative. Here, all those rollercoasters and other attractions could be set up on the former runway. How cool is that?

Hasenheide park will lose the ‘Maientage’ because it needs to be protected. The RBB radio and TV network quoted Jochen Biedermann, a Green alderman. He said the decision had been difficult but necessary, since the Hasenheide was not well. It was suffering from the climate change and an extreme draught. According to Biedermann, one tenth of all trees needed to be chopped down between 2018 and 2020. The funfair was damaging the park further, he was quoted as saying. For these reasons, the funfair in this unique atmosphere will be history soon.