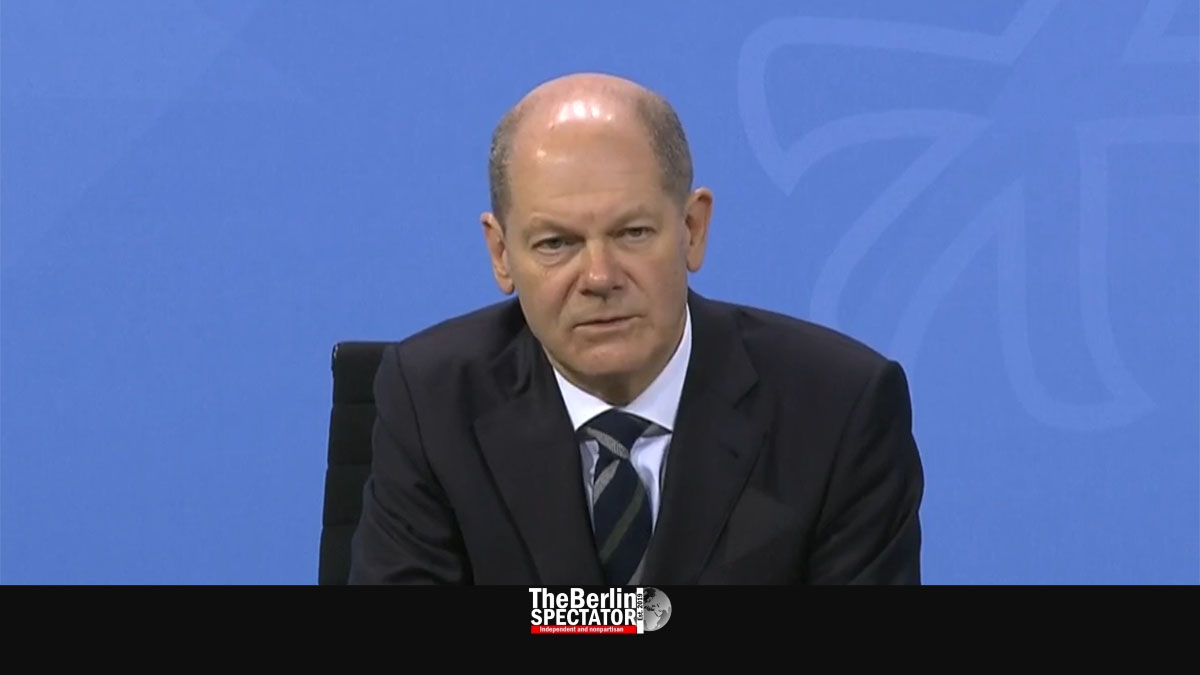 On ZDF television, Chancellor Olaf Scholz just rejected criticism expressed by his loud critics in regard to Germany’s Ukraine policy. Decisions on sending weapons there needed to be thought through carefully, he said. At the same time, he blamed the Ukrainian government for his refusal to visit Kiev.

Berlin, May 3rd, 2022 (The Berlin Spectator) — Germany was Ukraine’s biggest supporter before Russia attacked the country on February 24th, and still is today. Besides, the Federal Republic is supporting Ukraine by providing weapons it needs to defend itself. In order to be able to send them, Berlin changed its decades old policy of not exporting weapons to war zones. At the same time, Germany is accommodating and supporting some 400,000 Ukrainian war refugees.

Leading German politicians, including Chancellor Olaf Scholz and President Frank-Walter Steinmeier, a former Foreign Minister, have admitted that their former Russia policy was a mistake, from today’s perspective. Still, Steinmeier was disinvited by the Ukrainian government. Scholz told ZDF TV this was he reason he was not going there. The disinvitation had been a “remarkable occurrence”, he said. “You can’t do something like this. You can’t say the President may not come.”

Last month, Steinmeier had wanted to go to Kiev with his colleagues from Poland and Baltic states. Because of the role he played in the past, also in connection with the North Stream 2 natural gas pipeline, Ukraine had made clear it did not want him there. Not only Scholz, but also Foreign Minister Annalena Baerbock does not visit Ukraine because of the disinvitation of President Steinmeier. But Germany’s extensive support for Ukraine continues.

This week, Germany’s opposition leader Friedrich Merz, the chairman of the conservative CDU and its floor leader in the Bundestag, intends to visit Kiev. Merz said he would not let the government dictate whether he was going or not. Olaf Scholz, on the other hand, said in the ZDF interview, he approved Merz’ trip. Afterwards, he would communicate with Merz about his talks there. In the next two weeks, the CDU intends to win two state elections in Germany. They might be the reason for Merz’ stubborn tone of voice, in spite of the fact that there is a consensus behind the scenes.

Olaf Scholz rejected Merz’s criticism according to which he was hesitant and afraid in regard to his Ukraine policy. He had always taken important decisions quickly, the Chancellor stated. His strategy was to act prudently, instead of doing things only because somebody had told him to in a loud voice. All decisions needed to be thought through. Preserving the peace in Germany, and protecting the Federal Republic, was very important too, Scholz stated. His government wants to avoid becoming a war party while supporting Ukraine with weapons such as ‘Gepard’ anti-aircraft tanks. It is as thin red line.

According Scholz, Germany’s course is in line with that of the United States of America and E.U. countries. In the ZDF interview, he said several aspects were important in regard to weapons exports to Ukraine, including the question whether Ukrainian soldiers were trained on the systems that were sent there.

Scholz also criticized one of his predecessors, former Chancellor Gerhard Schröder who is friends with Russia’s President Vladimir Putin and a high-ranking representative for several Russian companies, including Gazprom. Scholz said this was unjustifiable. Schröder needed to vacate those positions, but added a Chancellor could not give his predecessor orders.