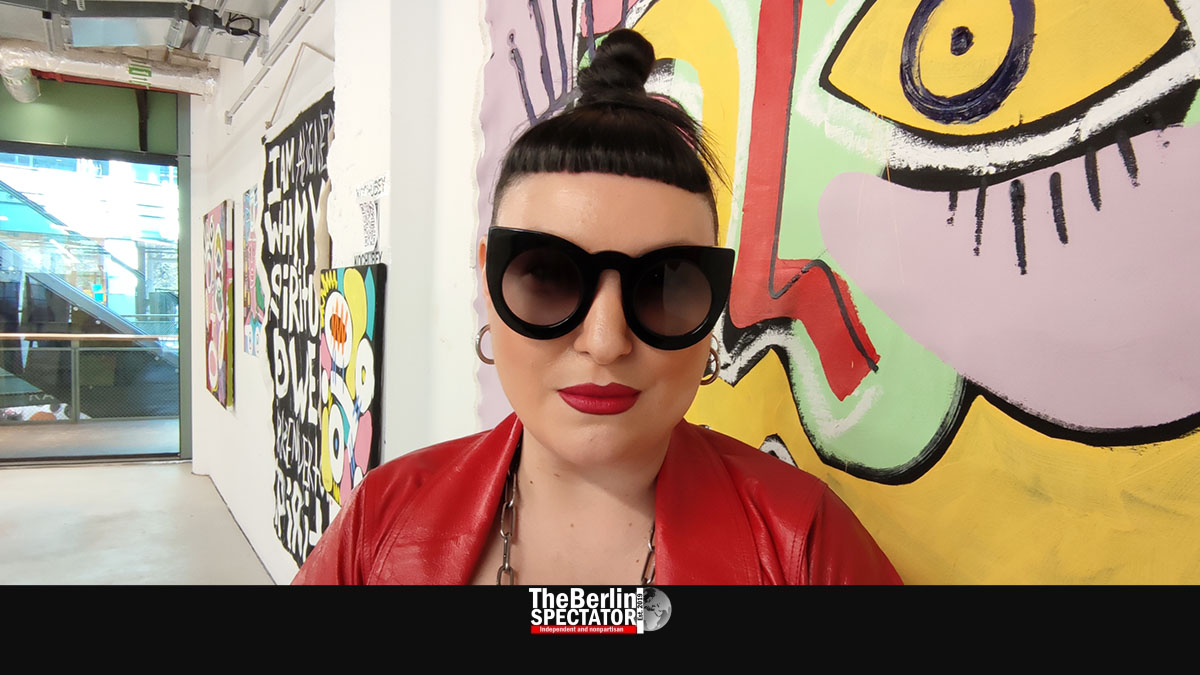 There is only one Vera Kochubey, and her art is unique. She focuses on Berlin, on queerness and strong messages, runs her own gallery and shows a lot of creativity. Her paintings are colorful, revolutionary and loud.

Berlin, May 3rd, 2022 (The Berlin Spectator) — The ‘Bikini’ at Budapester Strasse in Berlin’s Charlottenburg borough is a good address. Maybe even a little too good. On the first floor of this high-end (and high-price) mall, close to the excellent and very international food court, one place sticks out. It is a gallery that offers a lot of space, light and interesting contemporary art of the kind only one person creates. Her name is Vera Kochubey. And yes, she and her art stick out too.

She is not your typical artist in any way. At the university, her professor of art disliked her, most likely because she is and always was unconventional. He demotivated her by telling her she could not create true art. So, Vera Kochubey switched to psychology and became a journalist later. At age 22, when she had finally digested her experience at the art school, she returned to what she always had loved most.

Vera Kochubey does not paint plants on an easel set up on some nice pasture in the sunlit countryside. She does not draw historic buildings. Her creations are not modest and cute, but loud and majestic. It could be called in-your-face art. She has a message she conveys through her blend of art, and it will hit everyone in her reach. Her art does not hide. Her art does not make compromises. Therefore, it is very Berlinish.

She has exhibited her paintings all over Europe, including in Bolzano, London, Munich, Paris, Stockholm, and in Los Angeles. “Fuck Morals”, it says on one of her pieces which is part of a series with direct messages in black and white. In another series, she plays with colors, contrasts and figures very boldly. Berlin is the right place for her approach. “In Moscow, being an artist and queer personality seemed impossible”, she says. “So I moved to Berlin in 2011 to establish my artist career and live my life as a free spirit.”

Vera Kochubey says experiencing Berlin’s LGBTIQ and Techno scene had “stripped my art from anything but brutal lines and punk brushstrokes”. She says she was “quite an anarchist in the art world as I paved my way without formal training, choosing the opposite of the conventional route to success.” Her paintings will confirm the latter statement to anyone with open eyes.

At the gallery, she tells part of her story, how she remembers seeing those tanks on the streets of Moscow when communism collapsed three decades ago. She was five years old when it happened. Her grandfather was an “insanely talented artist”, but had to choose a more conventional profession in the USSR. So, he became an engineer who painted whenever he could. The apple does not fall far from the tree, but it might skip one generation.

“As soon as I could hold a brush, we painted together. When I was 3 or 4, he let me work on an oil color portrait of his father. I was raised in his studio, with the smell of oil paint and tobacco.” Her grandfather had been very authentic, she states, and had passed on the art to her from the very start, also by taking her to exhibitions by Kandinsky and other greats. Vera Kochubey was also influenced by the clear design of Soviet and Russian propaganda posters in red, white and black with strong messages.

It took the artist’s mother a long time to get used to her daughter’s kind of art. For quite a while, Vera Kochubey was in opposition to both her mother’s and her art professor’s more conventional ideas. “It took me years to persuade my mother that I am actually a fucking good painter and artist. I had to be brutal, loud and big to prove that I am serious. I am not going to paint little flowers. I want to do big art, I want to shout. There were lots of contradictions. My art was the only way to freedom. It let me be me.”

Soon, from June 17th, 2022, some of Vera Kochubey’s art will also be part of an open art and street art exhibition at Berlin’s Urban Nation museum that will last for two years. From November 4th, some of her paintings will be exhibited at another gallery, which is located in Bülowstrasse as well.

Punch in the Face

Of course, the Russian war of aggression against Ukraine is a big subject, to everyone, but above all to Vera Kochubey whose family has Ukrainian roots. “The war is a punch in the face to every Russian or Ukrainian person”, she says. For the first two weeks, she had been “in shock”. Most of her friends in Berlin are Ukrainians. “I have been active since day one and I’m trying to help and to volunteer.”