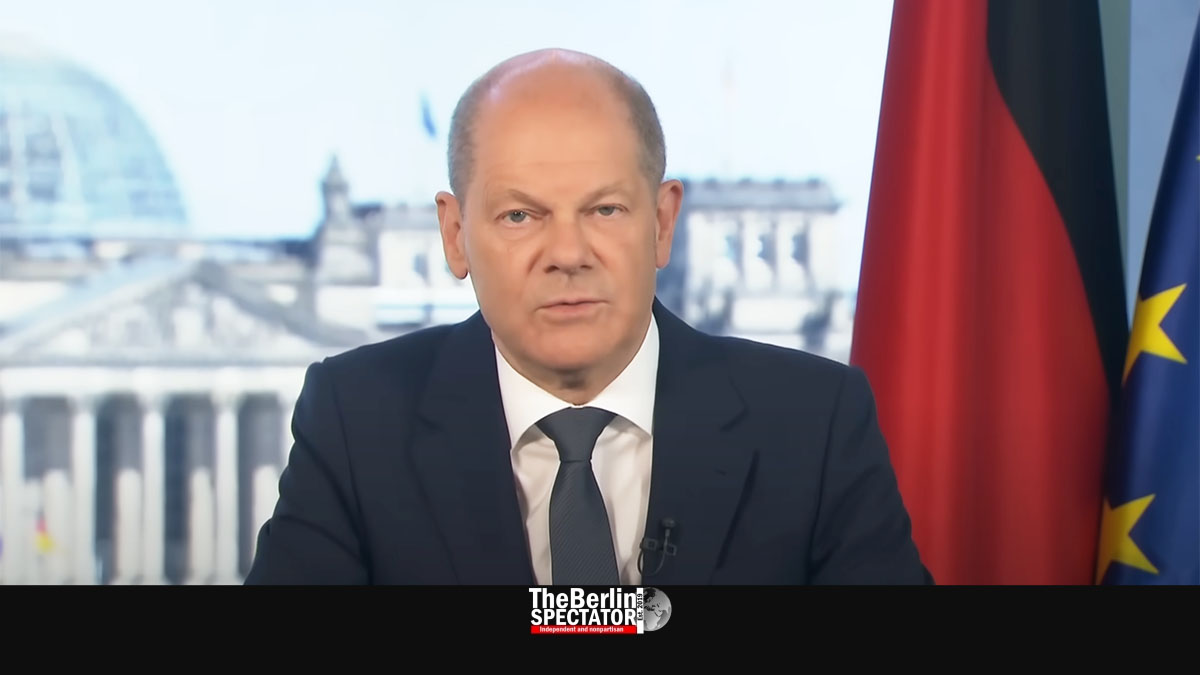 On the 77 anniversary of the Allies’ victory against Nazi Germany, Chancellor Olaf Scholz addressed the nation in a televised speech. He said it was painful to see the violence against the Ukrainians. President Putin wanted to subjugate Ukraine and to annihilate its culture and identity.

Berlin, May 8th, 2022 (The Berlin Spectator) — In a speech to the nation, Olaf Scholz reminded people of the fact that 60 million women, men and children were killed during WWII which ended 77 years ago today. Millions had died on battlefields as well as in their cities and villages, in concentration and extermination camps. “Germans committed these crimes against humanity”, the Chancellor said.

Seventy-seven years after WWII it was painful to see that there was violence against people again, in the middle of Europe, how the Russian army was killing men, women and children, flattening cities and even attacking refugees.

“We cannot recall the end of WWII in Europe without facing the facts: There is war again. Russia launched it”, Olaf Scholz told the Germans. “Back then, Russians and Ukrainians fought together, at great sacrifice, to defeat Germany’s murderous National Socialism.” Germany had been responsible for the war. Afterwards, it had worked on a reconciliation with both states. “But now, Russia’s President Putin wants to subjugate Ukraine and to annihilate its culture and identity.” Scholz said Putin was even equating his barbaric war of aggression with the fight against the National Socialists. “He is distorting history, and this is opprobrious.”

Germany was thankful for the Allies’ victory which had ended the Nazi dictatorship, the Chancellor stressed. The country had drawn a lesson from those events: “Never again! No more war! No more genocide! No more tyranny! But now, war in Europe is happening again.” He stated this meant that justice and freedom needed to be defended. “We support Ukraine against the aggressor”, Scholz said. “We are helping to make sure the violence will stop.”

Scholz mentioned the sanctions that were imposed on the Russian economy and leadership, and the fact that Germany is accommodating hundreds of thousands of Ukrainian war refugees. The German head of government thanked the many citizens who are helping. And he said the Federal Republic had exported weapons to a war zone for the first time. These exports would continue, he vowed.

This was about war and peace, about a historic responsibility, solidarity with Ukraine, but also about “our country’s and our alliance’s security.” Bringing in line these goals was a task the government was working on every day. There were four principles: First of all Germany would not take action without coordinating it with its alliance partners.

Secondly, Germany was making sure it preserved its own defense capability. Thirdly, actions that could harm Germany’s partners more than Russia would not be taken. The fourth point was not to take decisions that would make NATO a war party. The fact that there could not be another world war, especially not between nuclear powers, was another lesson drawn from May 8th.

Olaf Scholz told the German nation he could not say when and how Russia’s cruel war against Ukraine would end. But there would not be a peace dictated by Russia. “The Ukrainians will not accept it. Neither will we.” The Chancellor stressed Germany had seldomly been as unified with its friends and partners as it was now. “I am convinced: Putin will not win the war. Ukraine will prevail. Freedom and security will win” as they had 77 years ago.

The Berlin Spectator needs your support.
There are two ways to contribute, as you can see on our Donations Page.
Donations received in the past days:
May 8th: M.G., 5 Euro
May 7th: 0 Euro
May 6th: G.T., 2 Euro
May 5th: M.G., 5 Euro
Thank you!
We also thank our 15 regular supporters who donate about 8 Euro per day, in total.
In order to become a stable project, this publication needs at least 40 Euro per day. Would you consider becoming a supporter on Paypal (one-time or monthly donations) or a patron on Patreon (monthly donations)? Thank you very much.