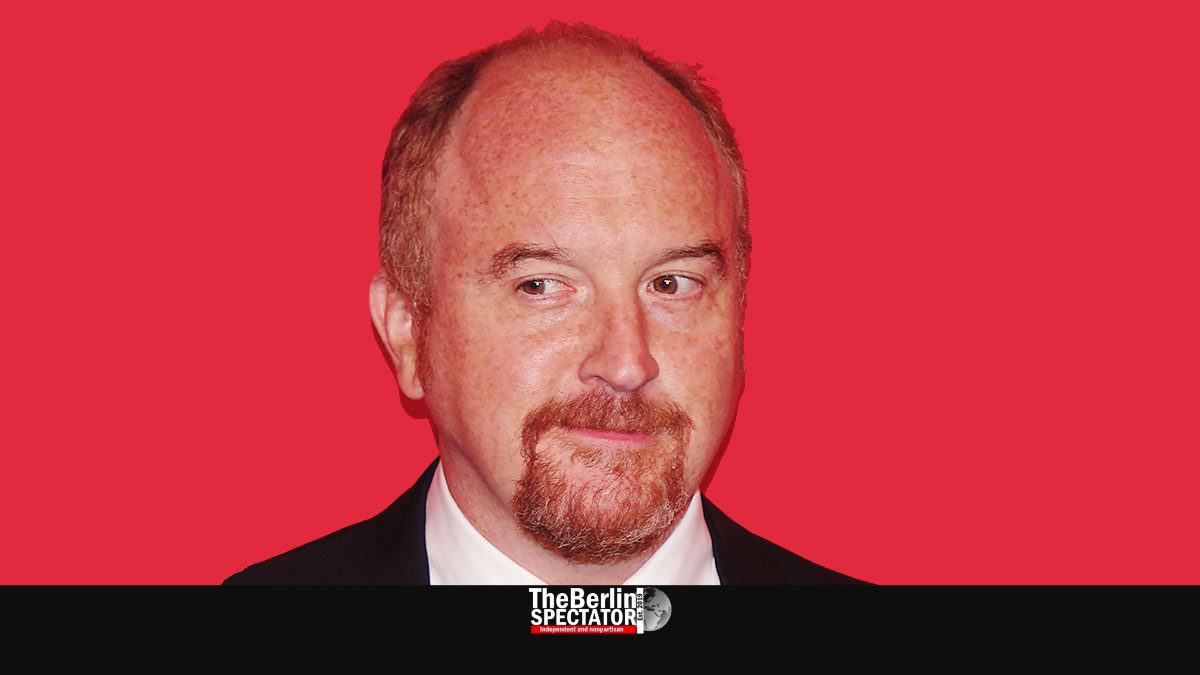 The brilliant Louis C.K. will be embarking on an international tour soon. It will take him to six European countries, including Germany. Unfortunately, only one German city is listed on his touring schedule.

Berlin, May 11th, 2022 (The Berlin Spectator) — When Louis C.K. takes on weird aspects of modern day life, he ridicules them and makes his message stick in all cases. In 2004, he philosophized about being broke in one of his programs. “Do you ever get so broke that the bank starts charging you money for not having enough money?”, he asked. By doing so, he delivered social criticism stirred into standup comedy.

“They charged me 15 Dollars. That’s what it cost me to only have 20 Dollars. Here’s the f-ed up part: Now I only have 5.” Louis C.K. also looked into a situation in which he had “negative 10 Dollars” on his account. “That means I don’t even have no money now. [….]. I wish I had nothing, but I have less than that. [….] If it’s free I can’t f-ing afford it.” These performances made his audiences laugh a whole lot.

Louis C.K. has been compared to the late George Carlin more than once. Sure, there are similarities, but the differences, in regard to their styles and the whole approach, outweigh them. On thing they had in common is that their material is hard to digest when they address sexual things the way both of them have. There is an aspect about Louis C.K. that is not funny at all, namely a sexual misconduct scandal that popped up during the ‘Me Too’ debate. It made him take a break for a while.

Like George Carlin, but also like his colleagues Richard Pryor, Dave Chapelle and Lewis Black, Louis C.K. entertains big audiences for an entire evening, on his own. He will share the stage with a microphone and tell us about our flaws, our weirdness and things we come across every day that do not make sense at all. Like the late Don Rickles, he also insults his own audience once in a while, in a more than funny way.

Louis C.K.’s new program is entitled ‘Sorry’. Here, he talks about absolutely everything, including Matt Damon’s old movie ‘Good Will Hunting’, which he analyzes for minutes. The older Louis C.K. gets, the more he develops his gift to talk about trivial BS while still convincing audiences and making them laugh without interruption. The man is a master.

Should he be forgiven for his sexual misconduct scandal? I would say yes, because of the combination of the following aspects: The whole thing was not ‘bad enough’ to have any legal relevance, he was already punished when he lost lucrative contracts, he did apologize, and female colleagues like Sarah Silverman forgave him too.

None other than Louis C.K. will be performing in Hamburg on June 8th, 2022. This event is part of his “international tour” that will also take him to Milan, Rome, Gothenburg, Paris, Stockholm, Stavanger and even Amsterdam. Let’s hope he will add some weird aspects about Europeans and their strange continent to his next program.

Tickets for Louis C.K.’s Hamburg performance are available here. His own website can be accessed here.

Main photo at top of page by David Shankbone (license)

The Berlin Spectator needs your support.
There are two ways to contribute, as you can see on our Donations Page.
Donations received in the past days:
May 10th: M.C., 5 Euro
May 9th: 0 Euro
May 8th: M.G., 5 Euro
May 7th: 0 Euro
Thank you!
We also thank our 16 regular supporters who donate about 8 Euro per day, in total.
In order to become a stable project, this publication needs at least 40 Euro per day. Would you consider becoming a supporter on Paypal (one-time or monthly donations) or a patron on Patreon (monthly donations)? Thank you very much.