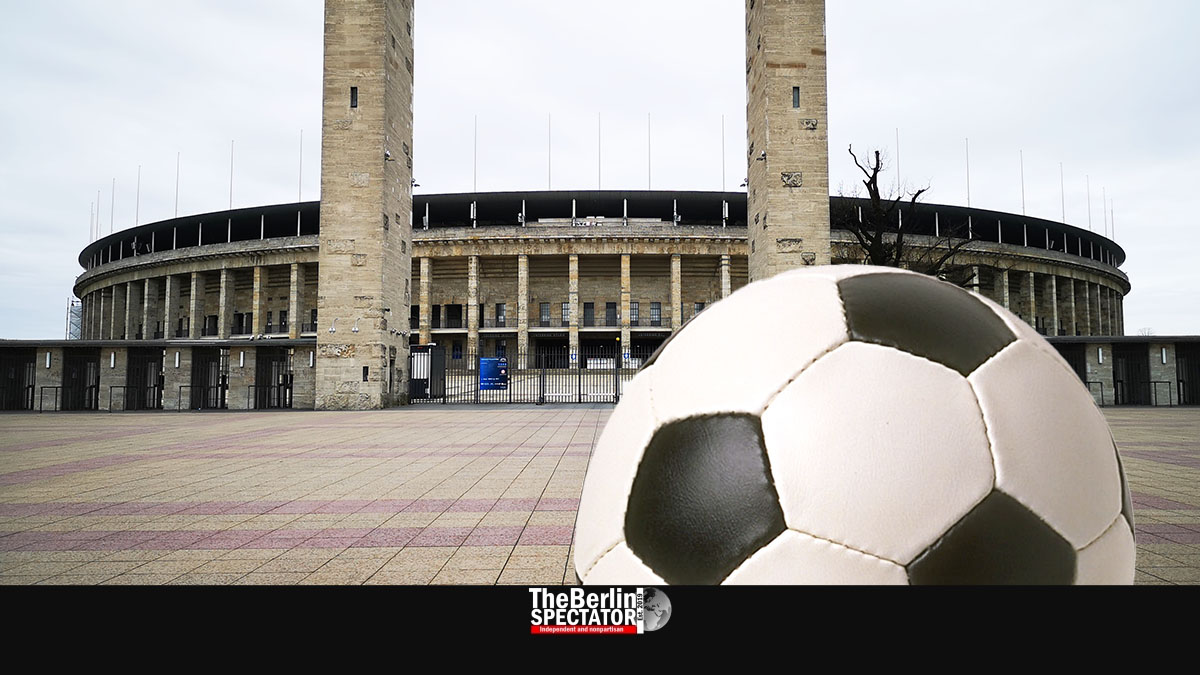 When you don’t have the faintest clue about soccer, a news item of this kind might not impress you as much as it should. Welcome to the club. But hosting the European Soccer Championship final is definitely good for Berlin.

Berlin, May 11th, 2022 (The Berlin Spectator) — Whether we are interested in watching 22 guys kick a ball or not does not matter here. Many Berliners and visitors are. The final match of the European Soccer Championship will make a lot more tourists come to Berlin. So will another five matches beforehand.

One of the Berliners who are really looking forward to all those soccer matches is Franziska Giffey, the Governing Mayor. “The decision by UEFA to have the final match take place at Berlin’s Olympic Stadium is cause for rejoicing”, she stated. “With guests from all over the world, we will be celebrating a huge soccer festival in the sports metropolis Berlin, in two years from now.”

“We are looking forward to a new summer fairytale in a great atmosphere, full stadiums and suspenseful matches. I am proud to have the opportunity to be the host of the final”, Franziska Giffey said. Her Senator of the Interior and Sports, Iris Spranger, is very enthusiastic too. She said the preparations were on their way at full throttle. “The Soccer Championship 2024 in Berlin will be diverse, inclusive and sustainable”, the Senator promised.

The final is scheduled to take place on July 14th, 2024. The other Berlin matches are supposed to happen on June 15th, 21st, 25th, 29th and on July 6th, 2024. Of course, one important question is open: Who will take part in the final match? It does not take a degree in rocket science to figure out which country German fans want to see play it.

Hamburg is part of all the action as well. The six groups the teams in which will face each other during the Championship will be drawn at the Elbe Philharmonic on December 2nd, 2023. Besides, four matches will be played at Hamburg’s Volkspark Stadium. The city state’s Sports Senator Andy Grothe said Hamburg would shape the Soccer Championship beautifully and attract the attention of the entire world. The event gave Europe “the chance to promote solidarity, understanding and respect.” Only sports had the power to do so.

The semifinals are scheduled to take place in Munich and Dortmund on July 9th and 10th, respectively. More footballs will be kicked in Stuttgart and Düsseldorf. In 1988, the Federal Republic of Germany hosted its last European Soccer Championship.

The Berlin Spectator needs your support.
There are two ways to contribute, as you can see on our Donations Page.
Donations received in the past days:
May 10th: M.C., 5 Euro
May 9th: 0 Euro
May 8th: M.G., 5 Euro
May 7th: 0 Euro
Thank you!
We also thank our 16 regular supporters who donate about 8 Euro per day, in total.
In order to become a stable project, this publication needs at least 40 Euro per day. Would you consider becoming a supporter on Paypal (one-time or monthly donations) or a patron on Patreon (monthly donations)? Thank you very much.