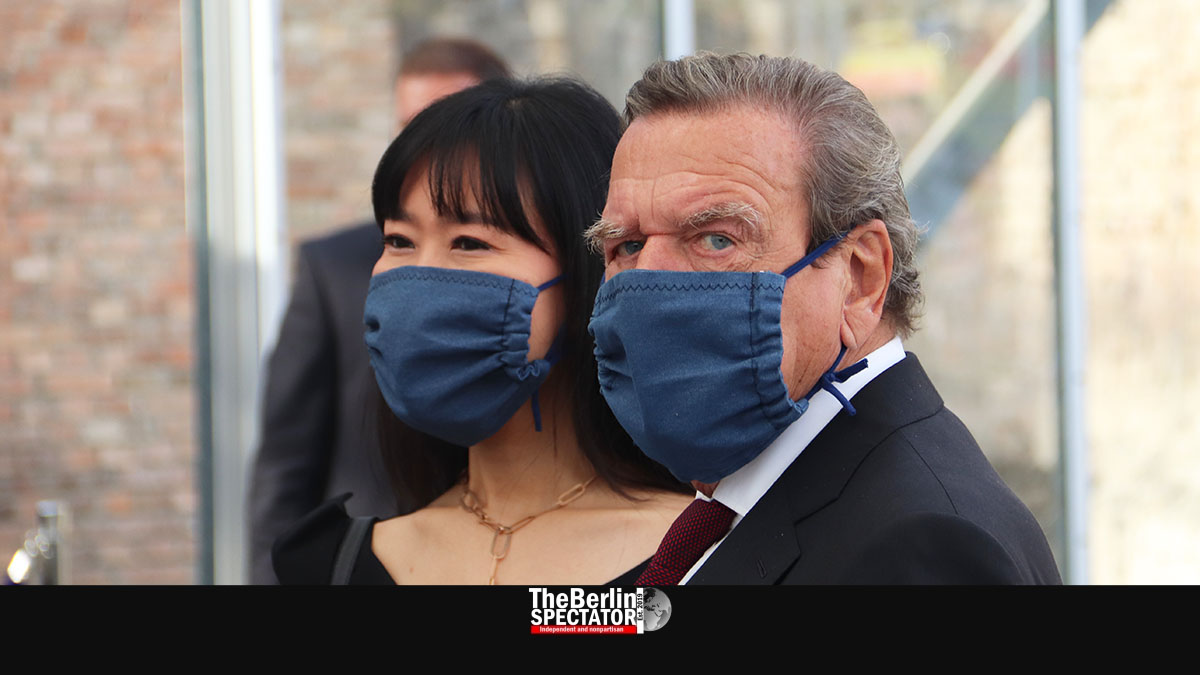 From 1998 to 2005, Gerhard Schröder headed a ‘red-green coalition’ which included his SPD and the Greens. After he lost elections against Angela Merkel’s CDU in 2005, he became a highly paid representative for Russian companies. His position on Ukraine now has consequences.

Sofia, Bulgaria, May 20th, 2022. Update: 4:56 p.m. CEDT (The Berlin Spectator) — Former Chancellors have a responsibility. They are neither supposed to work against their own country, nor work for or defend autocrats like Vladimir Putin who attack neighboring countries for no reason. Their income is not supposed to be more important than morals. After their time in office, Chancellors are expected to remain role models and serve their country.

Gerhard Schröder was Germany’s head of government from 1998 to 2005. When the conservative Angela Merkel became Chancellor, he started working for Russian or partially Russian companies, including Nord Stream, which was involved with the North Stream I and North Stream II natural gas pipelines, Gazprom and Rosneft. Long before Russia’s latest war against Ukraine, Schröder was criticized for those lucrative choices. Only today, Rosneft announced Schröder would not be part of its corporate board anymore.

With his latest comments on Putin’s ongoing war of aggression against Ukraine, he crossed a line. Even his party, the SPD, wants him out. Now, the Berlin Bundestag’s Appropriations Committee cut down his privileges, according to a report by the ARD radio and television network. Schröder, who spread Russian propaganda, for instance by accusing Ukraine of “saber-rattling” days before Russia attacked the country, just lot a lot of benefits.

The office he was running as a former Chancellor and its employees will not be paid for by the Federal Republic of Germany anymore. The ARD reports, the costs for the employees and their trips had amounted to 419,000 Euro (442,592 U.S. Dollars or 355,629 Pounds Sterling) in 2021. Gerhard Schröder will keep his pension with related benefits though, and his personal protection.

There is more trouble for Schröder. Since he has not left the Social-Democratic Party, in spite of the fact that the party leadership told him to get out, expulsion proceedings might be launched. It might just be a question of time until he is out.

On top of all of the above, the European Parliament wants to sanction Schröder. It approved a resolution that says E.U. member states should extend the sanctions they already imposed on Russian individuals to “European members of the management bodies of large, state-owned Russian companies” and persons who keep on receiving a lot of money from Russia. Both would include Gerhard Schröder. Other former heads of government, namely Wolfgang Schüssel from Austria and François Fillon from France, recently stepped down from the high positions they held in Russian state-owned companies. Schröder has refused to do so.

The Berlin Spectator needs your support.
There are two ways to contribute, as you can see on our Donations Page.
Donations received in the past days:
May 19th: A.Z. 10 Euro
May 18th: 0 Euro
May 17th: 0 Euro
May 16th: 0 Euro
May 15th: M.S., 3 Euro
Thank you so much!
We also thank our 16 regular supporters who donate about 8 Euro per day, in total.
In order to become a stable project, this publication needs at least 40 Euro per day. Would you consider becoming a supporter on Paypal (one-time or monthly donations) or a patron on Patreon (monthly donations)? Thank you very much.