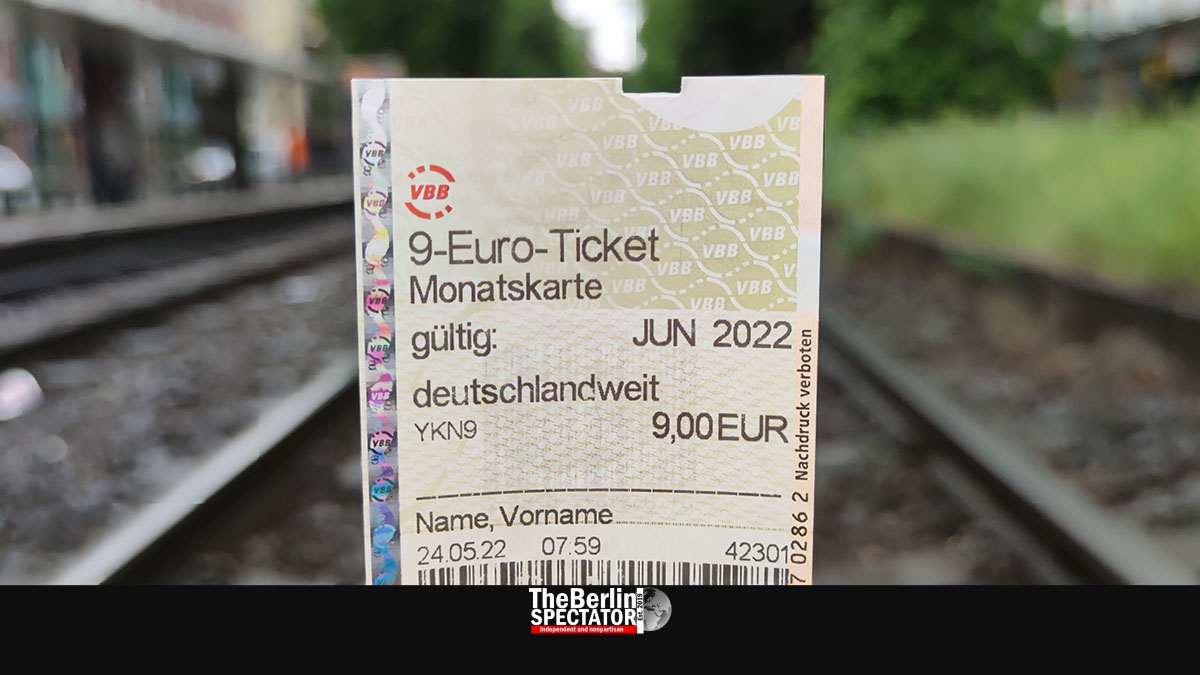 So far, the 9 Euro Ticket has not taken anyone anywhere. But it sells like warm bagels and even makes servers freeze. Everyone seems to be buying the ticket of tickets.

Berlin, May 24th, 2022 (The Berlin Spectator) — Only one ticket has ever made servers freeze. Only one has been posted on social media by thousands of its holders. Only one creates this kind of frenzy. Only one German train ticket has attracted this much attention abroad and even overseas. The 9 Euro Ticket is more than just a ticket. It’s an experiment and an opportunity. It is a great and a bad idea at the same time.

It is bad because it does not really serve its purpose, according to critics. A three-month measure like the 9 Euro Ticket will not make more people use the public transport, they believe, but create a chaos instead. Environmentalists have said the ticket was not sustainable. It is part of an expensive aid package that is supposed to reimburse Germans for the extremely high energy costs. If that is the case, why will the 9 Euro Ticket disappear after August 31st?

But the ticket is a good thing too. People who haven’t gotten up from their recliner since Germany’s reunification might use it to take a trip of a lifetime, or at least one to another city or the nice countryside Germany offers, for a little hiking adventure. It makes holidays affordable to those who cannot cover the usual train ticket prices. And it makes people squeeze into already overcrowded trains in times of Corona. Awesome.

On Monday, Deutsche Bahn (DB) began selling the 9 Euro Ticket. It did not take long until the state-owned company’s servers gave up. People who were trying to purchase the ticket of tickets got an error message instead. It told them too many people were making purchases at the same time and to “try again at a later time”. In Berlin alone, 130,000 people bought 9 Euro tickets from the public transport provider BVG last weekend. On Monday, 200,000 more individuals purchased them from DB, within a few hours after this ticket was added to all apps and ticket machines at train stations. Tens of millions of Germans, residents of other nationalities and tourists are expected to buy the 9 Euro Ticket in the coming weeks.

At Deutsche Bahn, they are preparing for a big run on all regional trains because those are the ones the 9 Euro Ticket can be used on. Going to almost any part of Germany on regional trains is possible. The downside is the fact that it takes a lot longer than on ICE, IC or EC trains. DB announced it would put more regional trains into service from June 1st and prolong existing lines to more destinations. Especially on the weekends, thousands of Berliners will want to go to the Baltic Sea. More trains will get them there. Will they be overcrowded anyway? You bet.

The 9 Euro Ticket is available for June, July and August of 2022. It has to be purchased separately for each month and person from 6 years of age. The local public transport in all of Germany can be used with one and the same 9 Euro Ticket. The same applies to Deutsche Bahn’s regional trains, including the ‘Regionalbahn’ (RB), the ‘Regionalexpress’ (RE) and the ‘Interregioexpress’ (IRE). In the Berlin Brandenburg region, the FEX Airport Express train between BER Airport and Berlin’s city center may be used by 9 Euro Ticket holders too.

The Berlin Spectator needs your support.
There are two ways to contribute, as you can see on our Donations Page.
Donations received in the past days:
May 23rd: 0 Euro
May 22nd: C.W. 5 Euro
May 21st : 0 Euro
May 20th: 0 Euro
Thank you.
We also thank our 16 regular supporters who donate about 8 Euro per day, in total.
In order to become a stable project, this publication needs at least 40 Euro per day. Would you consider becoming a supporter on Paypal (one-time or monthly donations) or a patron on Patreon (monthly donations)? Thank you very much.