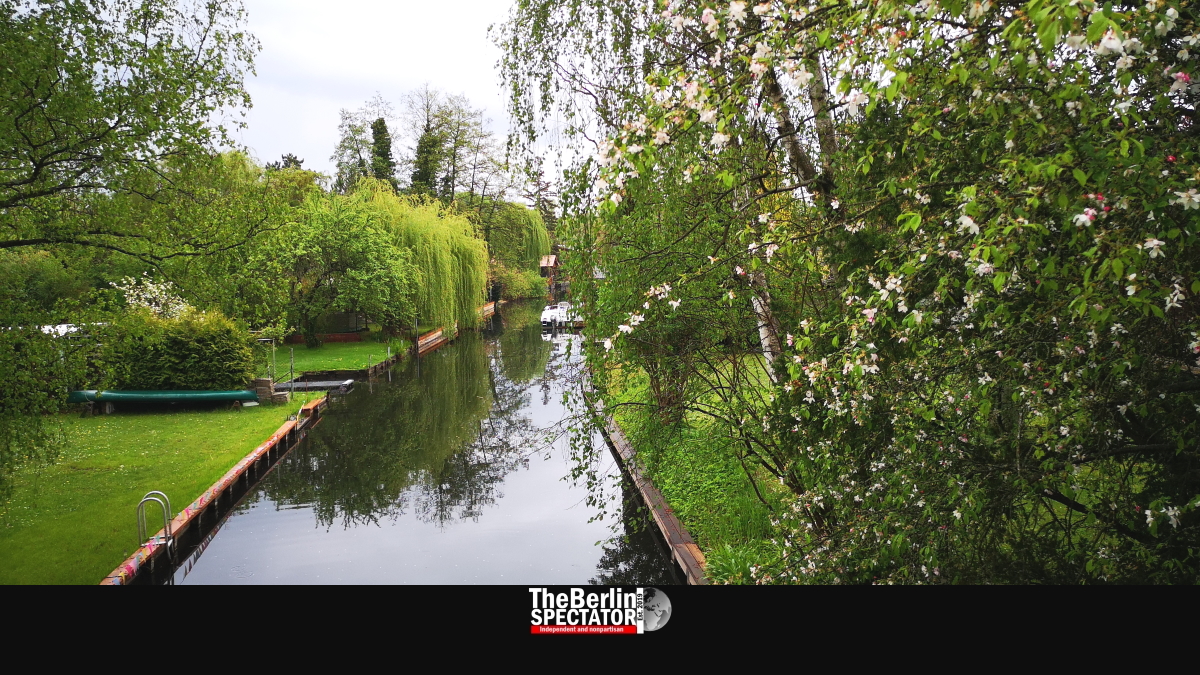 Usually, beauty is in the eyes of the beholder. Not in Berlin’s New Venice area though. Here, the beauty is obvious to absolutely everyone.

Berlin, May 3rd, 2020, updated May 25th, 2022 (The Berlin Spectator) — How did they do it? In New Venice, located in the eastern outskirts of Berlin, they must have brought in all the beauty in bags or boxes. O.k., they may not have St. Mark’s Basilica or the Ponte di Rialto, but it does not matter. The Canale Grande is there, at least in a way, and truckloads of other canals.

So much quietude in Berlin? Well, yes. Laughing children can be heard in the distance, the thunderstorm that just passed says goodbye with some rumble, and once in a while an aircraft roars off to London, Madrid or Sofia from nearby BER Airport in Schönefeld.

New Venice is located in Berlin’s Rahnsdorf district. From Kreuzberg or Neukölln, it takes about 40 minutes to get there by car, or an hour by bicycle. Both the Müggelsee and the Dämeritzsee, two nice lakes, are close by. The Müggelspree, a river that connects them, is in walking distance.

One hundred and thirty years ago, in 1890, a knight’s estate was sold to the town of Köpenick, which became part of Berlin in 1920. The area included a swamp that was supposed to be turned into something more useful. Once the canals had been built, this spot was called New Cameroon. But, hey, canals? Venice? So the area was renamed.

When communism collapsed, and the GDR ceased to exist, West Germans purchased properties there. Lucky them, because some supposedly paid bargain prices. Looking at those elegant houses and boats all over the place, and at the canals and duckies, was a nice experience. New Venice can be found here (Google Maps link).

The Berlin Spectator needs your support.
There are two ways to contribute, as you can see on our Donations Page.
Donations received in the past days:
May 24th: 0 Euro
May 23rd: 0 Euro
May 22nd: C.W. 5 Euro
May 21st : 0 Euro
Thank you.
We also thank our 16 regular supporters who donate about 8 Euro per day, in total.
In order to become a stable project, this publication needs at least 40 Euro per day. Would you consider becoming a supporter on Paypal (one-time or monthly donations) or a patron on Patreon (monthly donations)? Thank you very much.