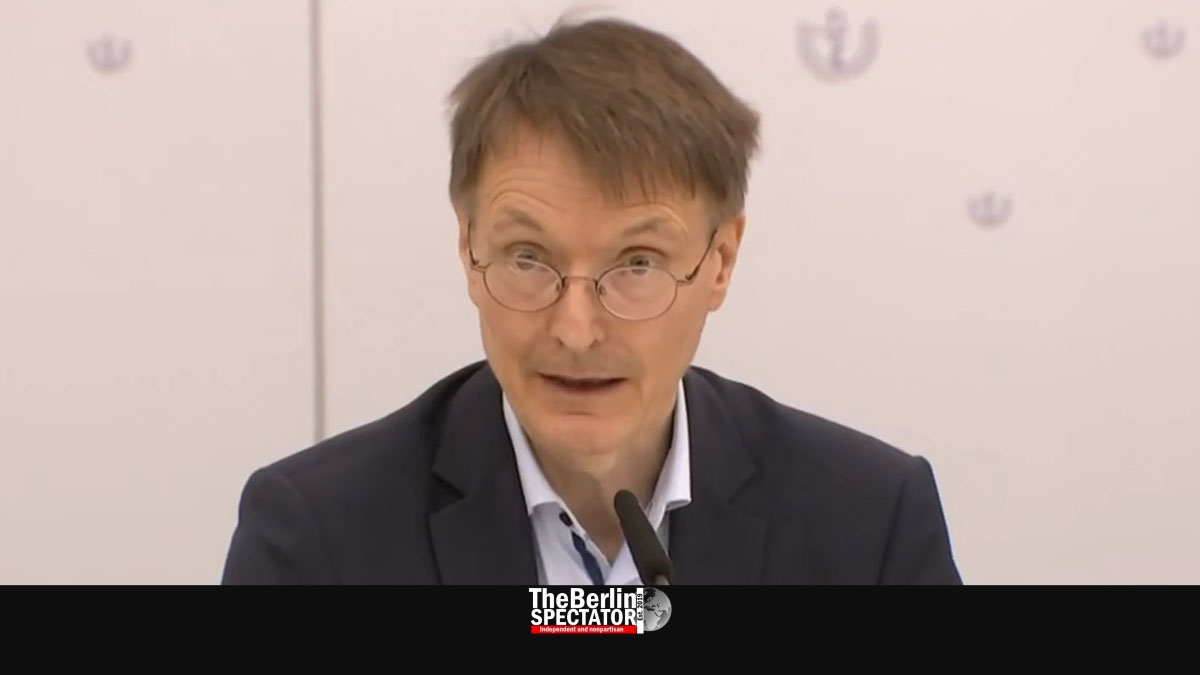 In Germany, more Monkeypox cases were registered. But Health Minister Karl Lauterbach stated this was not the beginning of a new pandemic. The Robert Koch Institute recommended a three-week isolation for affected persons.

Berlin, May 25th, 2022 (The Berlin Spectator) — In Bremen, where he is taking part in the ‘Deutscher Ärztetag’ doctor’s conference organized by the German Medical Association (GMA), Health Minister Karl Lauterbach announced a “quick and hard” reaction to the ongoing Monkeypox outbreak. This virus could be controlled in Germany and all of Europe, he said.

Lauterbach and the Robert Koch Institute’s President Lothar Wieler are now recommending a quarantine for both infected individuals and contact persons with a duration of 21 days. “Our chances to stop the pathogen are good”, Lauterbach said. The Minister announced he had ordered 40,000 doses of Imvanex, a vaccine against variola which was approved in the European Union nine years ago.

This was about being prepared for the necessary vaccination of infected persons and those they had been in contact with. Lauterbach said he expected a quick delivery. He stressed this was not the beginning of a new pandemic. Still, the situation needed to be taken seriously. Monkeypox was a known virus. Therefore it was clear how it could be fought. But he conceded it was unclear why the Monkeypox virus was spreading the way it was at this moment.

According to the World Health Organization, the total number of Monkeypox infections and suspected cases is 250. They are spread over 16 countries. Germany has at least nine cases right now. On Tuesday, the Institute for Virology at the University Clinic in Frankfurt confirmed a Monkeypox infection. Before, Bavaria had registered two more cases, which brings its total number to three. There are supposed to be a total of three infections in Berlin now, and one each in Baden-Württemberg and Saxony-Anhalt.

The Robert Koch Institute is expecting more cases to surface, according to Professor Wieler. “Therefore, it is our goal to curb the outbreak”, he said. Close contact to infected persons needed to be avoided, contact persons needed to be found and strict hygiene measures had to be taken. Especially risk groups needed to be careful. At this stage, men who have sexual relations with other men are affected the most.

Temperature, headaches and muscle pain are among the symptoms that usually appear first, before a rash develops. Close contact to infected persons leads to the transmission of the virus. Severe disease progressions can be deadly, in some cases. Some of the sequelae that have appeared are the formation of scars and blindness. But most Monkeypox patients will be fine after a few weeks.

The Berlin Spectator needs your support.
There are two ways to contribute, as you can see on our Donations Page.
Donations received in the past days:
May 24th: 0 Euro
May 23rd: 0 Euro
May 22nd: C.W. 5 Euro
May 21st : 0 Euro
Thank you.
We also thank our 16 regular supporters who donate about 8 Euro per day, in total.
In order to become a stable project, this publication needs at least 40 Euro per day. Would you consider becoming a supporter on Paypal (one-time or monthly donations) or a patron on Patreon (monthly donations)? Thank you very much.