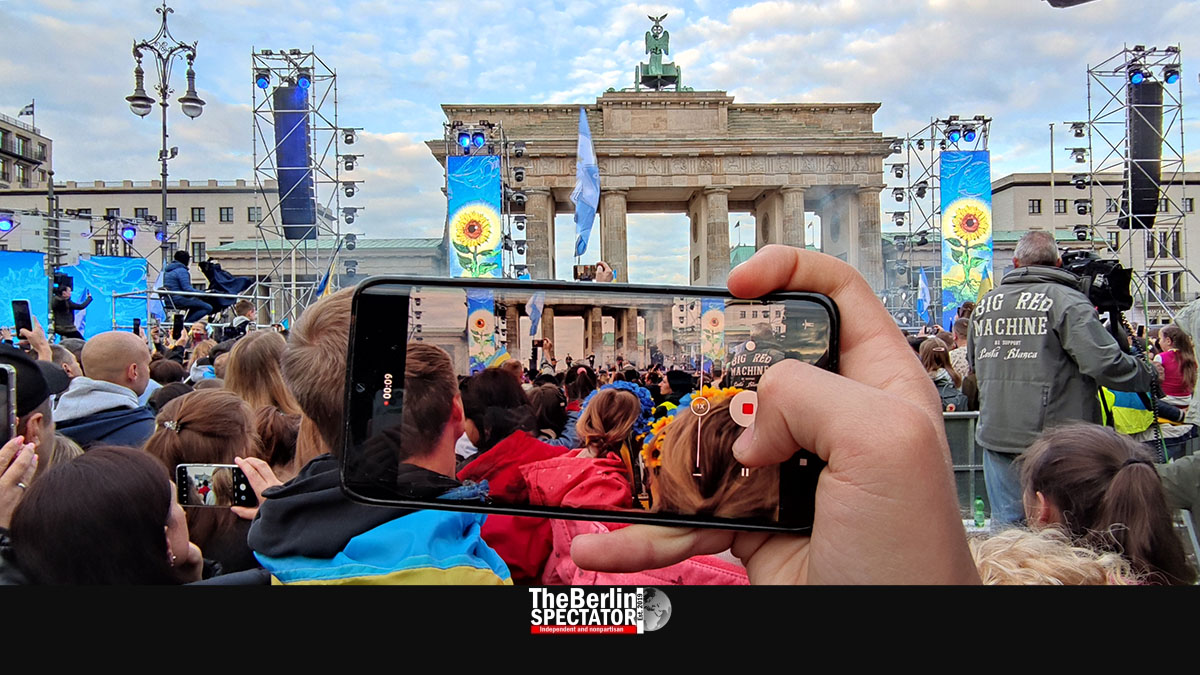 On Sunday evening, a concert for Ukraine was staged at Brandenburg Gate in Berlin. Mostly Ukrainians went there. Chancellor Olaf Scholz greeted the crowd in a video message, but nobody applauded.

Berlin, May 29th, 2022. Update: 9:30 p.m. CEDT (The Berlin Spectator) — At Brandenburg Gate, in the heart of Berlin, a big stage, two large screens and giant loudspeakers were set up for a solidarity concert for Ukraine. Once it finally started at 8:00 p.m., a big audience was there. It mostly consisted of Ukrainian families, but Germans were there as well.

Ukrainian musicians including the Kalush Orchestra were going to perform. Kalush includes the rapper Oleh Psiuk, the multi-instrumentalist Ihor Didenchuk, and breakdancer MC KylymMen. The group recently won the European Song Contest. Famous Ukrainian TV personalities hosted the show in English, because it was aired by stations around the world.

Early on, Olaf Scholz appeared on the two big video screens. “Our hearts and thoughts are with you”, he told the Ukrainians in English. The Chancellor stated financial help was being provided “to ensure than Ukraine’s economy does not collapse. We are sending weapons to Ukraine, breaking with a long-standing German tradition of not delivering weapons into war zones.”

“Nearly 800,000 refugees from Ukraine have found refuge in Germany. We are welcoming them with open arms”, Scholz said in his video message. “And we are already making plans to rebuild Ukraine after the war.” He closed his message by saying this: “We stand united, for Ukraine, for freedom, the rule of law and for dignity, as European sisters and brothers.” When the message ended, not a single person applauded, even though Germany does a lot indeed.

Since the Russian war of aggression commenced, 4,000 civilians were killed, including 250 children. Hundreds of thousands of Ukrainians were forced to flee from their homes, either because they were destroyed or because staying there was too dangerous. Countless war crimes were committed by Russian soldiers, including murder and rape. An end to the attack ordered by Russia’s President Vladimir Putin is not in sight. The European Union has put in place sanctions against Moscow. But, so far, they have failed to force Putin to end the war.

In Berlin, a protest against the war was supposed to take place at 4:00 p.m. CEDT on Sunday, before the concert, but hardly anyone showed up this early. In the afternoon, a few dozen people, mostly Ukrainian parents with children and groups of teenagers, waited for the concert in front of Brandenburg Gate.

The organizers of both the protest and the concert wanted to collect donations for Ukraine. They are supposed to be used for medical devices and similar items that are badly needed at hospitals in eastern Ukraine and all over the country. A video message by Ukraine’s President Volodymyr Zelenskyy weas supposed to be included in the televised event as well.

Because of the concert and the protest, the area around Brandenburg Gate in Berlin’s Mitte district was closed to motorized traffic for the entire weekend, including Strasse des 17. Juni between Yitzhak Rabin Strasse and the Gate. The Berlin Police Department sent hundreds of officers to the city center. Their task was to protect the participants and regulate the traffic.

Germany: Government and Conservatives Agree on Use of 100 Billion Euro Defense Fund