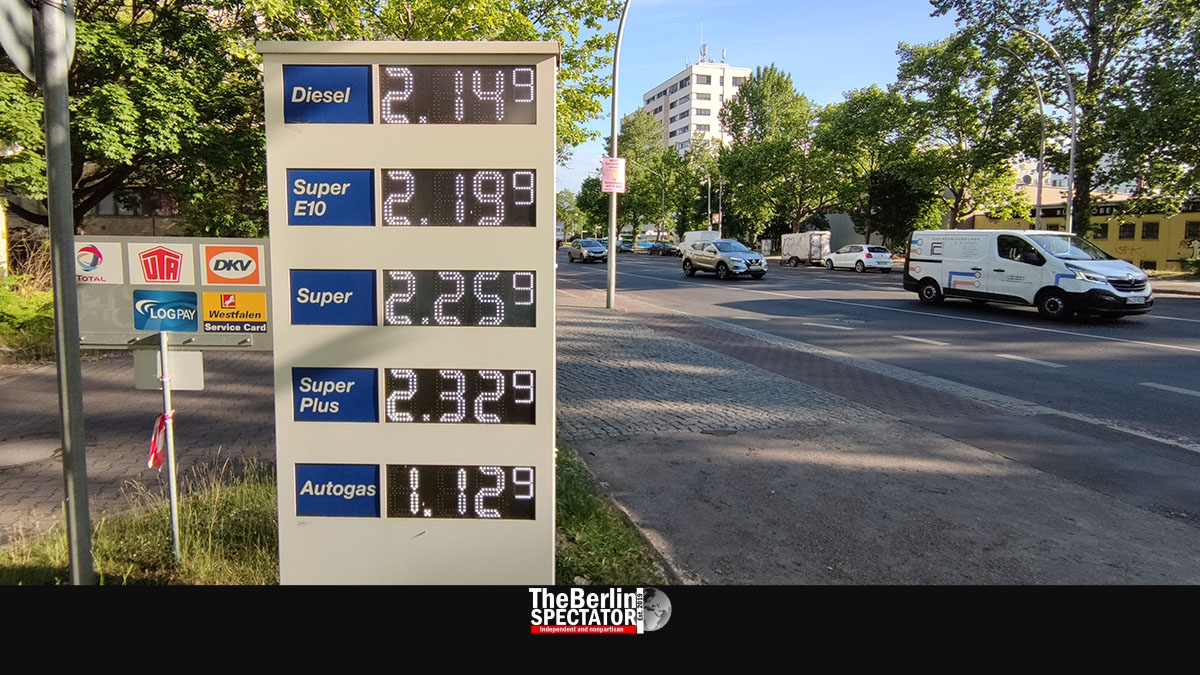 On June 1st, 2022, the fuel prices in Germany are supposed to decrease because of a tax break the government is implementing. But, just before the measure kicked in, gasoline became more expensive yet again.

Berlin, May 31st, 2022 (The Berlin Spectator) — Because of the extremely high energy prices, Germans and citizens of other countries who live in Germany will be reimbursed for three months. One of the presents the federal government is giving them is the 9 Euro Ticket. In June, July and August, people can travel as much as they want, on regional trains and regular public transport for 9 Euro (9.67 U.S. Dollars or 7.67 Pounds Sterling) per month.

Germany’s expensive aid package also includes a tax break for gasoline, for the same time period of three months. Thanks to the government, ‘E10 Super’ fuel will be 35.2 Euro Cent less, per liter, and Diesel 16.7 Cent less. But what if both are so expensive that people will hardly notice the decrease the tax break is supposed to cause?

Americans keep on complaining about their fuel prices in the United States. On May 23rd, 2022, the average price was 4.747 Dollars per gallon. When we convert Germany’s price level of last week to U.S. Dollars per gallon, the outcome is 8.52 (price converted on vcalc.com). In the past seven days, the average price for one liter of ‘Super E10’ increased by 4 Euro Cent to 2.129 Euro. Diesel supposedly costs 2.026 Euro.

This is the theory. The actual prices are even higher, at least in Berlin. This morning at 7:30 a.m. CEDT, one of the German capital’s cheaper gas stations at Storkower Strasse sold ‘E10’ for 2.199 Euro per liter (8.96 Dollars per gallon), and Diesel for 2.149 (8.74 Dollars per gallon, see main photo at top of page). Of course, these prices raise eyebrows and questions.

Will Germans even feel the tax break they are getting? When will this be the case? According to General German Automobile Association, the fuel prices are too high right now. Oh, really? Because of the Russian war of aggression against Ukraine, the oil price is still increasing. The latest price hike has to do with this fact. Still, Germany’s Federal Cartel Office will monitor the gasoline prices. This is what the authority’s President Andreas Mundt announced on RTL television. In other words: If the oil corporations do not pass on the tax break to the consumers, they will get into trouble.

But, even if those corporations play ball, there are aspects that could spoil the whole thing: For instance, the oil price could keep on rising, now that the European Union agreed on a partial oil embargo against Russia. Also, the gasoline and Diesel prices will most likely be decreased slowly, if at all, because the fuel sold at Germany’s gas stations will usually be purchased weeks or even months before the consumer fills it into his fuel tank, meaning it was bought when the tax break did not apply yet.

Some two years ago, just after Corona started hitting the world, fuel prices in Germany were less than half their latest levels. In the spring of 2020, a liter of Diesel was 0.99 Euro (or 4.03 U.S. Dollars per gallon).