Germany: Stress Test for 9 Euro Ticket is Coming Up 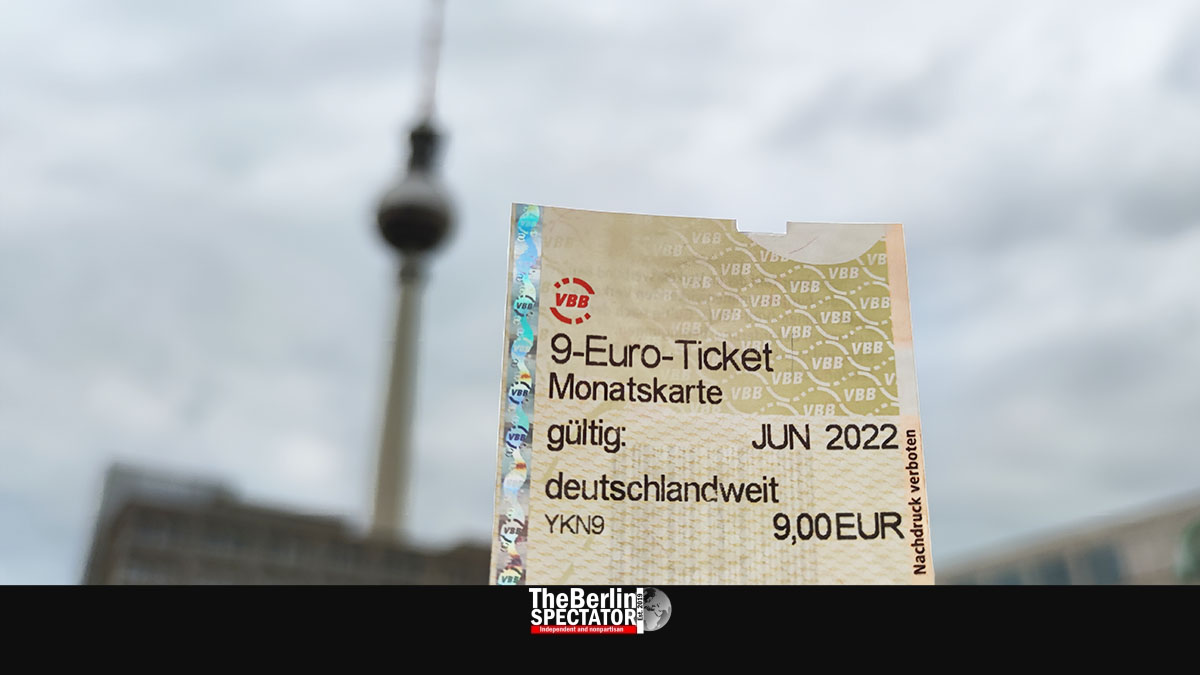 Germany has a new bestseller. Millions have already purchased the 9 Euro Ticket. Starting today, it can be used all over the country. The upcoming Pentecost weekend is the first stress test. Will it get out of control?

Berlin, June 1st, 2022 (The Berlin Spectator) — Ready, steady, go! Berlin’s main public transport provider BVG has sold more than half a million 9 Euro tickets so far, 400,000 of them for June, and the rest for July and August. The state-owned company sent out a statement in which it said it was looking forward to have “many new passengers”.

Making people use the public transport more is one of the main reasons the 9 Euro Ticket was launched in the first place. The other is to reimburse Germans, expatriates and immigrants for the high energy prices. Foreign tourists can make use of the ticket as well. For 9 Euro (9.68 US. Dollars or 7.56 Pounds Sterling), everyone will be able to travel all over Germany and use the public transport everywhere in the country for an entire month. The downside: Neither fast trains such as Deutsche Bahn’s Intercity Express (ICE), Intercity (IC) and Eurocity (EC), nor FlixTrains or FlixBuses are included.

Another disadvantage is the fact that many trains will be overcrowded because millions of Germans and people of other nationalities who live in the Federal Republic or who visit the country intend to use the opportunities the 9 Euro Ticket gives them. Deutsche Bahn (DB) said it had sold 7 million of them so far. This aspect gives us an idea of what those regional trains will look like.

DB has several kinds of regional trains the 9 Euro Ticket is valid on, including the ‘Regionalbahn’ (RB), the ‘Regionalexpress’ (RE) and the ‘Interregioexpress’ (IRE). It is also running a few trains that are both regional ones and ICs. So far, DB says the 9 Euro Ticket cannot be used on those. But there are ongoing talks the outcome of which might (or might not) change this policy. Picking the right regional train connections for long distance trips is easy (see separate feature ‘Germany’s 9 Euro Ticket: Questions and Answers‘ for explanation).

Because tens of millions of people will likely use the 9 Euro Ticket to travel, Deutsche Bahn said it would increase the number of trains on its tracks by 50, especially on routes to Germany’s North Sea and Baltic Sea beaches and other tourist destinations. More of DB’s employees are supposed to be on duty. Of course there are those who believe these measures will not be sufficient.

The 9 Euro Ticket’s first stress test is only days away. During the long Pentecost weekend from Friday, June 3rd to Monday, June 6th, 2022, which is an official holiday, the big question will be answered: Is Deutsche Bahn ready for the challenge or will the stress test get out of control? There is a worst case scenario: Police officers could be ordered to clear overcrowded train stations and get passengers off trains.

In a certain way, the 9 Euro Ticket is like a nuclear reactor. The passengers are the critical mass that has to be tamed. If Deutsche Bahn and the police fail to do so, a rather big mess will be the consequence. A big ‘stampede’. A chaos. A nightmare.

On the local level, the situation will probably be under control. According to the BVG in Berlin, the sequence of many ‘U-Bahn’ train, bus and trams lines will be sped up. Employees will be present in more stations at night. At the same time, more security agents are supposed to be on duty. “Our passengers should have a good feeling when they travel with us”, Rolf Erfurt, a member of the BVG’s board, stated. On top of it all, the BVG’s vehicles will be cleaned more often. What could possibly go wrong here?

Holders of the 9 Euro Ticket can obviously use it for many kinds of local, regional and even long-distance trips. But there are also things they cannot do: The First Class is off limits. Crossing international borders into any of Germany’s nine neighboring countries is not included either. Nor is taking bicycles on trains. Extra tickets are needed here. By the way: There is no guarantee there will be room for bicycles on regional trains because of the expected ‘stampede’.

Note: In the past weeks, we have published numerous features and articles about the 9 Euro Ticket. Find them all here.